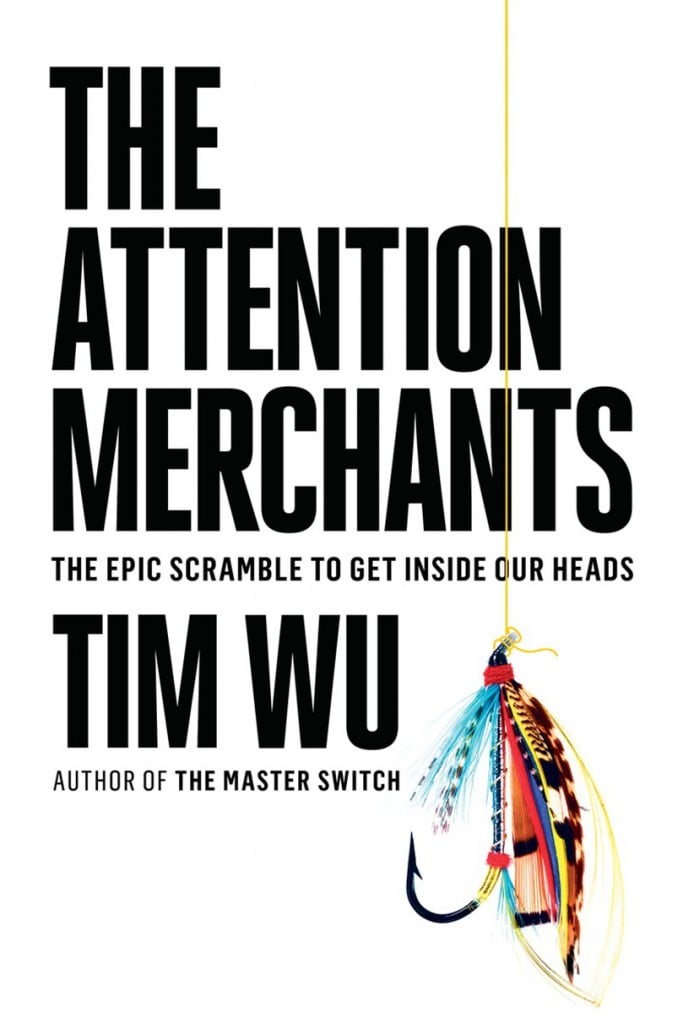 The Attention Merchants by Tim Wu (No credit)

Humanity is in crisis, Tim Wu asserts—not so much because of climate change, or inequality, or the rise of the alt-right, but because . . . look, a baby sloth! Sorry. Where was I? We’ve become, in Wu’s words, “‘homo distractus, a species of ever-shorter attention span known for compulsively checking his devices.” We’ve (d)evolved thusly due to what Wu calls “attention merchants,” those who make a profit by capturing and selling our attention.

Wu, a law professor at Columbia and the author of The Master Switch (2010), offers a caustic, illuminating history of advertising. He explains how the concept of turning customers into products did not originate with social media, charting its rise from the early days of the ad-driven New York Sun in the 1830s through the gradual colonization of radio, TV, computers and smartphones.

Wu connects dots between the early 20th-century snake-oil salesmen who were sold readers’ attention by newspapers, and 21st-century online advertisers that snare our eyes when we look at clickbait. Many of the figures he cites have religious backgrounds, from early 1900s patent-medicine copywriter Claude C. Hopkins, once a teenage Baptist preacher, to Oprah Winfrey, high priestess of feel-good consumerism. Society’s secularization, Wu argues, has found attention merchants taking over from the men of God who encouraged devotion and contemplation.

The Master Switch posits that communications systems from the telephone to the Internet have undergone cycles of freedom, constriction (driven by oligopolies or monopolies), and disruption. In this book, Wu explains how the second stage is driven by insidious advertising. Lofty ideals are corrupted: George Paley, CBS executive, commissioned Edward R. Murrow’s seminal investigative journalism and then cancelled his show in favour of game shows and Westerns; Sergey Brin and Larry Page went from denouncing ad-dependent search engines to presiding over Google’s growth into an advertising behemoth.

Wu insists his purpose is more to inform than to persuade us that the “bargain” we’ve signed with media giants is Faustian. But as inventor of the term “net neutrality” and one of its most persistent advocates, often he can’t hold back. Here he is writing about the Huffington Post: “Perhaps the site was by its nature never really meant to be a business exactly, but instead just a giant vacuum sucking up human attention.” And on BuzzFeed: “With content often nearly devoid of any meaningful communication, the medium truly was the message.” He’s most cutting when laying out how little online ads are worth. Our attention is sold for meagre sums as the Internet itself becomes “something of a 99-cent store.”

Over time, he notes, various consumer, government and even corporate “revolts” have served as checks on rampant ads—most recently the popularization of ad blockers on phones, as well as the online TV subscription model pioneered by Netflix. But for all that his account becomes more passionate—and more alluring—toward the end, it’s also selective. After all, Wu’s bête noire, BuzzFeed, for instance, has invested in long-form political journalism, and Netflix exists in part so that we may watch ad-free original Adam Sandler movies.

With its focus on the ad business, The Attention Merchants is best read in conjunction with a book such as Matthew B. Crawford’s The World Beyond Your Head, which offers a more personal and philosophical exploration of what enforced distraction is doing to our brains, and how to fight it.

Of course, like Crawford, Wu is preaching to the converted, and it’s unlikely his readers would finish a 350-page book about this issue—or a 600-odd-word review thereof—without some determination to block out the noise around them. Even so, The Attention Merchants supplies worthwhile ammunition for the fight against listicles, adorable cats, sloths, and sloth itself.