The next James Bond may be a character actor in disguise

He's beautiful, and a phenomenal actor, but Tom Hardy has insisted on playing roughed-up underdogs—till now. 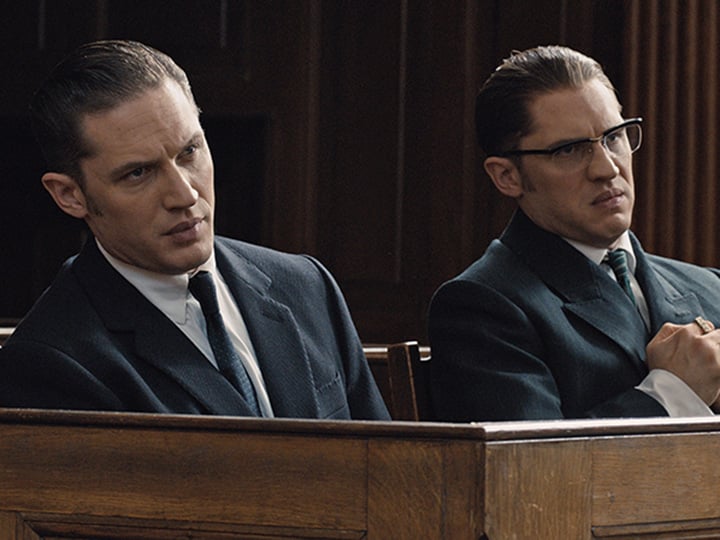 (L to R) Reggie and Ronnie Kray (both played by Tom Hardy ) in Legend. (Universal Pictures)

In Legend, Tom Hardy literally beats himself up. The scene arrives in the latter half of Brian Helgeland’s biopic about the Kray twins, real-life gangster brothers who became underworld celebrities in London in the swinging ’60s. Following a spell in the clink, dapper family ambassador Reggie Kray arrives at a nightclub he owns with his less dapper, more homicidal brother Ronnie, to find it virtually empty. While Reggie has been out of service, his brother has royally screwed everything up. Again. The twins proceed to pummel each other with blows powered by decades of familial resentment. It’s a split-screen feast of kicks and punches and slaps, but also of acting. But also of psychology. For Hardy, who plays both brothers, is himself both of these men.

Legend insists on reviving Reggie’s short-lived relationship with wife Frances Shea (Emily Browning), but it’s his malignant relationship with his unstable brother that fuels the film. Reggie, an Esquire fashion spread with a pulse, is forever attempting and forever unable to contain his larger, more volatile twin. Of course that’s the twin Hardy wanted to play. “We get Tom as the groomed leading man everyone wants him as—but he’s never let himself be before—because his side of the deal is getting to play Ron,” director Brian Helgeland told the Guardian. It’s a dichotomy that has plagued Hardy from the start, wanting to be Ron, while he’s actually Reg.

Tom Hardy is beautiful. He is so beautiful that he won a Find Me a Supermodel competition when he was all of 21. At the time he was rangy, with lips like couch cushions and jolie Jolie cheekbones. He was being groomed for a beautiful life, one in which he was to replace a more famous beauty, Jude Law, as a Pecard-like Romulan in 2002’s Star Trek: Nemesis. It was supposed to be his big coming-out party—but instead, it was the prologue to years of alcohol and crack addiction. It would be 2008 before anyone noticed Tom Hardy again. By that time he had been to rehab, gained weight, lost his cheekbones, and covered his feminine pout with whiskers. As Charles Bronson, “the most violent prisoner in Britain,” he was a bald-headed, bulked-up machine of a moustachioed man, the opposite of what he had been. “When I was a kid, people thought I was a girl but I wanted to be strong, to be a man,” Hardy told the Guardian. “I had no skin as a kid. Now I’m covered in tattoos.”

In his new iteration, Hardy has convincingly played a mixed-martial-arts champion in the Oscar-nominated Warrior (2011), the only villain to clip Batman’s wings in Dark Knight Rises (2012), and the titular post-apocalyptic action star of Mad Max: Fury Road. Next he plays opposite another recovering poster boy, Leonardo DiCaprio, in The Revenant. But it’s Legend that is Hardy’s most notable career move to date, not because it’s his best film, or even his best role(s), but because it’s the only one to catch him in this existential limbo, between what he is and what he aspires to be. As Guy Lodge wrote in Variety, “That both these distinct achievements—the work of a vital movie star and a resourceful character actor, respectively—are contained within a single performance is, of course, its true marvel.”

Hardy has often described himself as sensitive and has an affinity for the underdog (in fact, for the dog in general). He gravitates toward desperate, lonely characters, he once told an interviewer: “Hustlers and pimps and villains and drunks and homeless people and loneliness; disparity and the losers.” Yet Hollywood has him targeted for the next Bond. And, perhaps because of Reg, he is now actually considering taking the quintessential straight lead—“I think anybody would consider doing Bond, wouldn’t they?” he told Sky News—or maybe it’s because, in the wake of Daniel Craig, whose 007 is less about Savile Row and more about not dying another day, the character is now closer to his ideal. “I don’t feel rugged and strong and capable in real life, not how I imagine a man ought to be,” Hardy told Esquire last year. “So I seek it, to mimic it and maybe understand it, or maybe to draw it into my own reality.”