Vote for your favourite Céline Dion song: Round One

It's officially Céline Week at Maclean's! Our experts have devised a list of Dion's all-time best songs. Vote for your favourite ones in round one.

Round One is over. Click here to vote in Round Two.

But as one of this country’s premier songstresses sings her last Vegas tune, Maclean’s couldn’t resist making a big deal of it all. Do we really need an excuse? As Dion enters this new phase in her career, a campy new cool complete with carpool karaoke, we launch Céline Week. We’ll ask readers to vote on Dion’s best song of all time. (More on that below.) We’ll also look at her best commercials, the very best photos spanning her long life in the spotlight, and so much more.

Maclean’s experts have devised a list of Dion’s all-time best songs, a legendary discography whittled down to a playlist of eight. Based on their popularity (according to Spotify plays), we’ve seeded our picks from 1 to 8. Vote for your favourite in each first-round matchup below (you’ll see a poll beneath each pair of write-ups). The first-round winners will advance to a second-round of votes (stay tuned!), and Céline Week will end with a showdown pitting one finalist against another, Céline versus Céline. Vote away! 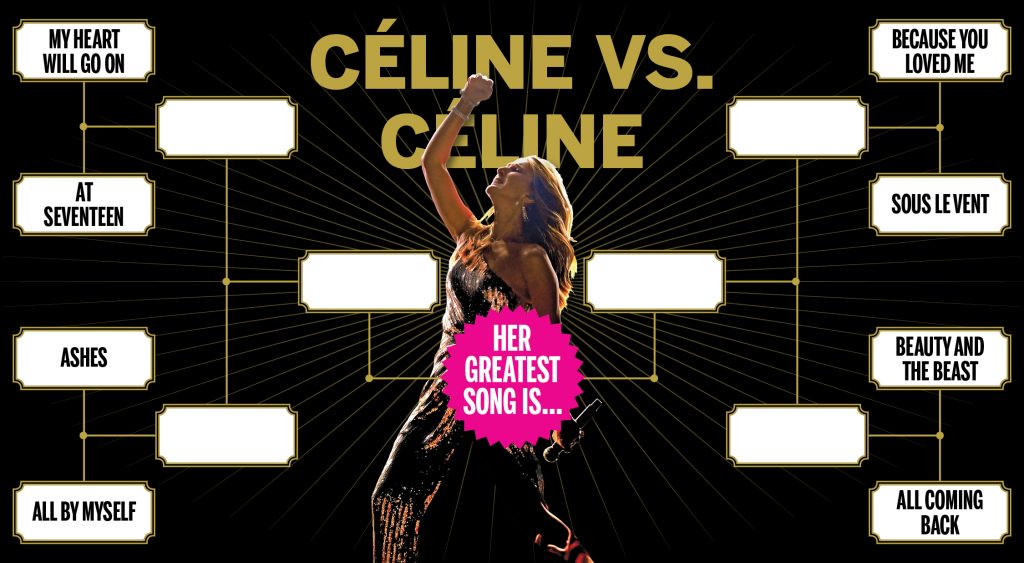 Here’s what the brackets look like right now. Feel free to print this and play along at home.

Celine Dion’s persona is a suspension bridge strung between two towers: her great voice and her gawky looks. Nowhere is that tension more exposed than in her cover of At Seventeen. The high-school pathos of Janis Ian’s lyric can feel manipulative. But nobody with a heart would deny Celine standing to sing for all “who knew the pain/of valentines that never came.” Then there’s the slick melody—only feigning at folksiness—and oleaginous samba rhythm. It’s more cruise than coffeehouse. Or, better yet, more Vegas. In videos from her show, Dion slips convincingly into At Seventeen like it’s slinky couture. —John Geddes

Rarely does a song so beautifully capture appreciation for that purest kind of love—a love that makes you shine, whether that’s from a parent, partner or friend. And not only does this complete jam (also the soundtrack for best journalism movie ever, 1996’s Up Close and Personal) put Bette Midler’s semi-comparable “Wind Beneath My Wings” to shame with superior vocal ability, it was an absolute monster hit, topping the charts in more than 10 countries and scooping up Grammy after Grammy. Céline Dion is everything she is because Canada lurves her. We should show our unconditional appreciation in return by crowning this song her best. —Sarah Boesveld

All right, then, I’ll defend something she sang in French. This was relatively late, a 2001 duet with the Sherbrooke-born singer Garou, more than a decade after Dion’s U.S. chart success would have permitted an end to her French-language career. But she’s never stopped singing in French. “Sous le Vent” was a huge hit, certified diamond in France, platinum in Belgium and Switzerland. What’s striking is neither singer internationalizes their accent for this global market. It’s a very Québécois power ballad. —Paul Wells

For an artist who’s built her career on hyperbole—this is a someone with a personal “image architect” for Charlemagne’s sake—a relatively short three-minute power ballad for a superhero comedy sequel sounds, at its core, anti-Céline. Yet, “Ashes” proves Dion doesn’t need Titanic’s tears or Beauty and the Beast’s tortured amour. Deadpool is a movie franchise built on being ironic, self-aware and tongue-in-cheek. So while Dion performing the theme song for Deadpool 2 seems worth a laugh, her performance is so powerful—without a hint of irony as she belts out “Let beauty come out of ashes”—it’s the vocal equivalent of running over a bad guy with a Zamboni. —Aaron Hutchins

In Céline Dion’s vast repertoire of stomp-on-your-heartstring hits, there’s one song that truly stands alone—and it’s titled accordingly. Dion’s 1996 cover of Eric Carmen’s “All by Myself” is not just her best song, it’s a song that, at one point or another, everyone needs. Dion took this ballad about our deepest darkest fear and turned it into a cathartic experience. And with more Canadians living alone than ever before, we need that now more than ever. Because, even if you’re all by yourself, you still have Céline. —Ishani Nath

Johnny-Come-Lately fans might have cottoned on to Mme. Dion once her smash hits “Because You Loved Me” and “My Heart Will Go On” propelled her to iconic status. We Caribbean folk knew what was up in 1991, when Mme. Dion parked herself in front of legendary R & B crooner Peabo Bryson(!) at the height of his powers, and matched him note-for-note on Beauty and the Beast. The song became utterly inescapable in wedding dances, easy listening stations, and the car stereos of uncles with crown-shaped air fresheners on their Lexus dashboards. This is the song that made Céline Dion the queen of our hearts; that rare entertainer whom folks from the Caribbean community will absolutely lay down their reputations—perhaps even their health and well-being—to defend from all slander and malediction. —Andray Domise