Netflix lures back Amy Poehler, Bradley Cooper and a superstar cast for a prequel series that's even more ridiculous than the original 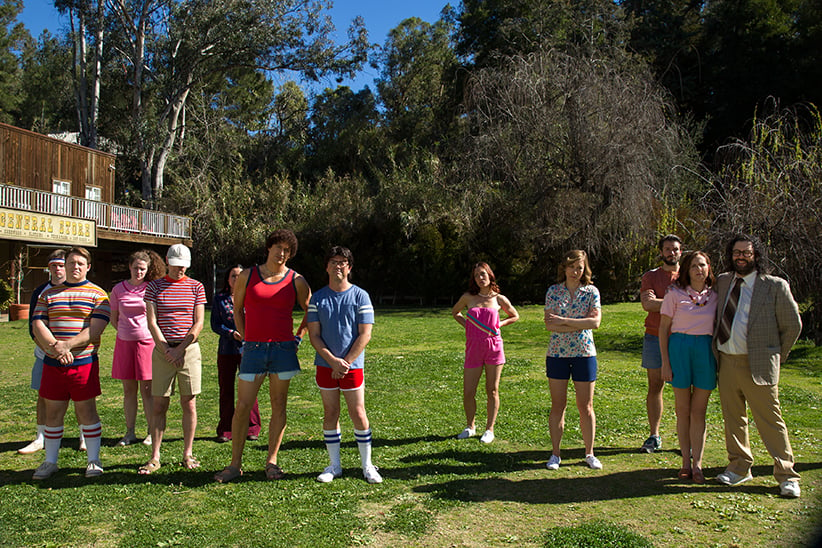 Poetry, for T.S. Eliot, was not an expression of the artist’s personality, but an escape from it. “The progress of an artist,” he wrote, “is a continual self-sacrifice, a continual extinction of personality.” But what of art that finds its expression if not in the personality of its artist, then the material, the stuff of the artist’s life? Much great art emerges from the biographical detail and deeply personal minutiae, the warts-and-all confessionals we keep hidden away from the world. The stories we normally wouldn’t share, not even on a dare. Like the time when, in the summer after first grade, Michael Showalter crapped his pants.

The embarrassing incident is figured into an episode of Wet Hot American Summer: First Day of Camp, the long-gestating prequel series based on the 2001 cult comedy Wet Hot American Summer, written by Showalter and longtime comedy partner David Wain. In the series, a rookie camper named Kevin dirties his swimsuit and buries it in the woods, only to have it discovered by persecuting bunk bullies. “It’s basically exactly what happened to me,” Showalter confesses. “I denied it. I denied in exactly the same manner that our character does. And they were like, ‘but your nametag’s sewn into it.’ And I just said, ‘I dunno. Someone must have stolen my bathing suit and took a s–t in it and hid it in the woods.’”

It’s these sorts of real-life stories, silly and scatological as they are, that ground the more prevalent, anarchic absurdity of First Day of Camp. “Most of the storylines are loosely or in some way inspired by something we remember,” says Wain, who like Showalter spent the summers of his youth at camps dotting the woods of the American northeast. Led by Wain and Showalter’s sketch troupe the State (which also included comedians Ken Marino, Joe Lo Truglio, and Michael Ian Black), the original Wet Hot captured the weird flavour of summer camp life: the heat, the adventure, the inchoate adolescent horniness. Though it flopped on its release, the movie’s following ballooned. “It was so odd,” says Wain. “I realized people were talking about it long after they should have stopped talking about it. People started stopping me on the street, then I heard people were dressing up and having parties, and midnight screenings, and summer screenings. It just kept growing and growing and growing. It’s sort of the opposite of what usually happens. It seems like the movie is more popular today than it ever was.”

Wet Hot’s success can be chalked up to a number of things. There’s the way it portended the ’80s nostalgia fashion of American Apparel, swaddling its cast in too-short athletic shorts and ribbed T-shirts. There’s the success of Wain’s subsequent films (he’d go onto direct mainstream comedies Role Models and Wanderlust, as well as the irrepressibly zany rom-com spoof They Came Together, co-written with Showalter). There’s the seemingly endless rewatchability, with Wet Hot revealing itself as a densely packed pomegranate of jokes and absurdist gags. And of course, there’s the mounting prospects of many members of its central cast—including Paul Rudd, Amy Poehler, and a pre-Academy Award nominated Bradley Cooper—over the intervening decade.

With the new eight-episode Netflix prequel, Wain and Showalter aren’t at at all precious about their reunited cast’s Hollywood superstar bonafides. Case in point, when Poehler and Cooper (arguably the series’ biggest-name stars) are introduced in First Day Of Camp, it’s as if Wain and Showalter take pains to make them seem ridiculous—dolling the duo up and Raggedy Ann and Raggedy Andy costumes, flopping dorkily on a camp stage. “We really tried to stay true to the world of what the movie was,” says Wain.

“I think it would have been odd if we were like, ‘And now: Braaaaadley Cooooooper!’ What was fun about the shoot was that none of that came into the shoot at all. We were just back into the same vibe and same feeling we had 15 years ago.”

This vibe—absurd, nonsensical, just out-and-out silly—attracted plenty of other stars to the First Day of Camp. Cameos and bit parts are filled out by Kristen Wiig, Michael Cera, “Weird” Al Yankovic, and Jason Schwartzmann, as well as other actors not typically associated with comedy, like Jon Hamm, Chris Pine and Bruce Greenwood. Given the poker-faced ridiculousness of Wet Hot (this is a franchise in which toxic ooze transforms a man into a sentient can of mixed vegetables, and also in which a man make loves to a refrigerator), these dramatic actors tend to steal the show. Certainly, Christopher Meloni (best known for tough guy turns in Oz and Law & Order: SVU ) is one of the most hysterical aspects of the original film, and the follow-up TV series. “It’s almost written for actors to be played straight,” says Showalter. “We’re not necessarily looking for comedians. We’re looking for actors to come in and play the characters, as written. And then the comedy really comes out of that.”

First Day of Camp doubles down on that perhaps limited, cultish appeal of Wet Hot American Summer, keenly playing to the fan base that has slowly developed since the film’s release. Even the premise—in which all eight episodes unfold on the first day of the same summer in the first film—compounds the silly setup of the original. Where there everyone looked a decade too old to be playing sexed-up teenagers, now many of them look fully like paunchy middle-agers. (Save for Rudd, whose boyish good looks seem unscathed by time.) “We talked about the possibility of a 10-years-later reunion,” Showalter says. “But I think we slowly gravitated around the idea of a prequel, mostly just because it was funny.”

And, maybe more than anything, that’s what First Day of Camp is: funny. Not funny like Netflix’s celeb ennui cartoon BoJack Horseman is funny. Not funny like the high-stakes HBO dramedy Silicon Valley is funny. First Day of Camp is a torrent of jokes and gags, built to weather the sort of multiple marathon replays that so benefited its namesake cult movie. The pacing escalates manically, as plots curlicue around one another, increasing in their needless complexity and welcome stupidity. It invites not so much sporadic belly laughs as a steady streaming of giggling, of dopey Beavis and Butthead-styled chortling. It’s funny like a really good joke is funny. Or funny like a fart is funny. It’s funny like how a kid crapping his bathing suit then hiding it in the woods then having that bathing suit found and then denying that it’s even his bathing suit despite the fact that his name is literally sewn into the bathing suit is funny. It’s just really, really funny.