What is it about Spring Breakers? 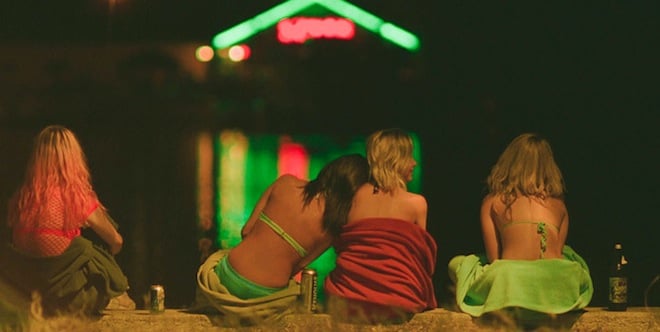 In Anthony Lane’s recent New Yorker review of Spring Breakers, a movie about four college girls who rob a Chicken Shack restaurant in order to fund a Florida spring break, the film critic writes that two sorts of people will glorify the film: “Real revellers, randy for sensation, out of their heads; and, a block away, coffee-drinking Ph.D.s, musing on the cinema of alienation, too lost inside their heads to break for spring.”

I have a feeling that Lane may be bang on. Last week a friend saw a special screening of the film (it opens in Canada on March 29.) Afterwards she tweeted that a fight almost broke out during the screening when a man shushed some girls, who then called him a c–t. Afterwards, those girls chugged a two-litre bottle of cream soda and a 40 of vodka in the washroom.

But I also think there might be a grey area, for people–like me–who haven’t quite made up their minds on this Bonnie and Clyde-like beach odyssey set in the bowels of contemporary America, or, for that matter, on the director, Harmony Korine.

I saw Spring Breakers last September during TIFF. It was one of the only screeners–available to the press before festival film premieres–that was packed, with a line-up of media folk waiting outside to see if anybody would leave, so they could fill their seat. People even sat on the theatre’s steps. I got stuck in the front row, where I was held spellbound by not only James Franco’s performance as  “Alien,” a metal-mouthed drugs and arms dealer who befriends the four girls and is–astonishingly–as repulsive as he is charismatic, but also by how beautiful all this celluloid trash looked. (That’s on account of the cinematographer, Benoît Debie, “who photographed Gaspar Noé’s Enter the Void, the opening credits of which provided the liveliest phantasmogoria of the past decade,” noted Lane.)

From Korine’s oeuvre, I’ve only seen Kids, which he wrote, and Gummo, which he wrote and directed. Like both of those films (and Purple Rain, which I watched on VHS in the basement of my neighbour’s house when I was 11), I left Spring Breakers feeling like I needed to shower.  But unlike Korine’s other films, something about his latest movie moved me–and I laughed harder than I can remember doing in a movie in a long time during a scene where Alien plays Britney Spears’s Everytime on a white grand piano overlooking the beach while his gang of girls brandish guns and wear matching fluorescent-coloured bikinis and balaclavas.

That happens to be the very scene Lane describes as being the moment when the film takes a turn for the worse: “What began as a blast, gleefully poised between salvation and satire,” he wrote, “has dwindled into a gaseous trip.”

Why did I find that scene so funny? And was this the sort of reaction Korine hoped to elicit?

Afterwards, I was reminded of all those appearances he made on Letterman in the mid-1990s where his oddities gave Dave plenty of fodder, before the host eventually banned him from the show. (Coincidently, Letterman explained exactly why Korine got the boot to guest James Franco the other night.)  In a recent interview in the New York Times T Magazine, Korine was asked about those appearances. He responded it was,”a pretty accurate reflection of who I was at that time. Remember, I was a kid.” But in that same interview, when asked if he really expected American to embrace Gummo, a film that featured cat killing, glue-sniffing and a prostitute with Down Syndrome, the now 40-year-old director replied, “I swear to you, I thought it had the possibility of being on a double bill with a film like The Shawshank Redemption. I thought what I was making was so exciting that you couldn’t deny it, and it could work in a huge commercial way.”

I wonder if he’s come to terms with the inevitability that his work, which either makes art out of the ugly, or makes the ugly into art, never being accepted by the masses. The success (or failure, depending on one’s point of view) of any of his projects has to do with the ambiguity, with the internal drama we feel not knowing just why we are so fascinated by these images and why the man who put them on the screen was equally fascinated enough to produce them.

Great art doesn’t necessarily have to make sense, but it does have to engage, to hold our interest, to burn images into our minds. If a work of art in a gallery or museum doesn’t engage me visually, rarely will I find my opinion changed after reading an accompanying placard that a curator has written. In fact, I probably wouldn’t read the placard to begin with. Because if said art work succeeds in engaging, and Spring Breakers did for me, then the creator has no obligation to explain the meaning, the intent or the purpose.

Back in September I had a chance to catch a glimpse of Korine at the TIFF Spring Breakers after party, where it seemed everybody on the festival circuit came to pay their respects to the auteur, who was wearing, if memory serves correct, a blue blazer, khaki pants and white sneakers. (He spent a good deal of time talking with the illusionist David Blaine.) I remember wondering if Korine enjoyed that the party organizers outfitted a downtown Toronto restaurant with hot tubs filled with bikini-cladded women, beach balls and jam jar-filled vodka cocktails, or if the decor’s theme was too conspicuous.

Come to think of it now, I have a feeling he didn’t care. If he’s smart–and I think Korine is, despite his sort of avant-garde Colombo routine–he’s content with letting the images around him, and more specifically, those that he creates, rattle around in the culture that was crazy enough to create them.

Here’s Korine’s first appearance on Letterman after Kids premiered in 1995: