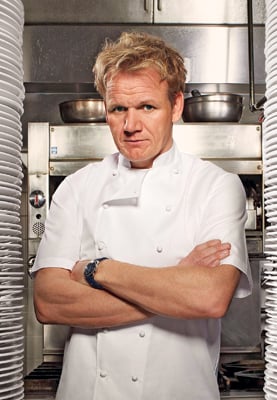 Recent news that Gordon Ramsay had become a “partner” in a fabled Montreal chicken joint should have elicited one and only one response: the guy who helped put British cuisine on the map is now doing takeout in the colonies? What the @#$%^!?

True, the famously profane chef had promised to expand his embattled empire to Canadian soil: on the CBC’s The Hour in 2009 he said “definitely Toronto first,” and that he’d scouted locations. Still, “the most unexpected foodie news of 2010,” as the Montreal Gazette put it when the paper broke the story in November—that Ramsay had joined forces to remake Rôtisserie Laurier BBQ, a family-style restaurant in Outremont—was a head-scratcher.

Was the move part of a shrewd diversification into casual dining now that the fine-dining market is under siege? Or was the 44-year-old’s 25th restaurant venture a symptom of early onset “Wolfgang Puck syndrome,” wherein a talented chef stops cooking and starts shilling, thereby diluting his identity to the point he’s best known in the frozen-food aisle? For an example, one need only look at Ramsay’s own mentor, Marco Pierre White, the original bad-boy chef who’s now a pitchman for Knorr bouillon cubes and processed “Turkey Twizzlers.”

Ramsay’s surprising association with Rôtisserie Laurier BBQ grew out of his licensing deal with Danny Lavy, CEO of Elite Group Inc., the Montreal-based company that distributes Gordon Ramsay-branded goods—toasters, pots, blenders and such. Last year, Lavy bought the ochre building housing the restaurant, Quebec’s first roasted-chicken outlet when the Laporte family opened it in 1936, and seized the opportunity to revitalize a faded Montreal landmark. Over the years, clientele thinned as more fashionable restaurants popped up (the third Laporte generation closed the upstairs). Today, it’s a charming anachronism on an affluent stretch of Laurier, drawing diners of all ages, evident by the crayons at the front desk. The menu is displayed on paper placemats. The food—chicken, coleslaw, ribs, mac ‘n’ cheese—is hearty, if unmemorable. No one is photographing their plate. Desserts—sugar pie, “Hello Dolly” cookies, carrot cake—are unironically retro, as is the wait staff of older women. More than half of the business is takeout and delivery.

Lavy, a restaurant newbie, teamed up with Danielle Lord and Marie-Christine Couture, veterans of the Montreal hospitality scene, to run the day-to-day. He turned to Ramsay, for his input—and name. “It’s a real estate investment and it made sense to go with comfort food,” Lavy says.

Of course, given Ramsay’s ongoing travails, just how much attention he’ll have for his Canadian chicken venture is a question mark. There’s talk he’ll open a Las Vegas steakhouse this year. There’s his ongoing publicity-magnet endeavours, which last week saw him doused with fuel and held at gunpoint in Costa Rica when he investigated illegal shark fin trading for a British TV show. And there’s his ongoing public feud with his former business partner—and father-in-law—Chris Hutcheson.

Over the past 13 years, the two parlayed Ramsay’s reputation as a Michelin-star-amassing wunderkind into a far-flung culinary colossus that saw the “Gordon Ramsay” brand plastered on restaurants, TV programs, cookbooks, and cookware. The global credit crunch of 2007 exposed their imperial overreach. Ramsay narrowly escaped bankruptcy by selling off properties; he abandoned ownership of his non-U.K. eateries and turned consultant. Later, he called the period “the worst bollocking ever.”

But 2010 didn’t see much lessening of the testicular clamp: a further flurry of Ramsay’s high-end locations closed while others opened to mixed reviews; the Royal Bank of Scotland established a legal claim on Ramsay’s London house as security for a $17-million overdraft; long-time employees departed, including Hutcheson, who was sacked by Ramsay in October. Shortly after, Hutcheson told a newspaper that fame had “perverted” his son-in-law; Ramsay countered that his father-in-law was a “dictator” responsible for the business’s problems and that his mother-in-law had attempted to “poison” his marriage. (It wasn’t Ramsay’s first foray into the tabloids. Adultery allegations in 2008 left his family-man reputation in tatters. Last year, an American chef he razzed mercilessly on his TV show committed suicide, the second contestant to do so.)

Given Ramsay’s hectic schedule, which includes Home Shopping Channel appearances, signs of Gordon Ramsay fatigue aren’t surprising. Not one of his 10 London locations made it onto the 2010 edition of the influential British Hardens Guide of “10 best places to eat in London,” though two did make its “most disappointing” list. His London restaurant Pétrus received a critical drubbing when it reopened last year, most damningly that it was “beige.” The Independent raved about the reopened Savoy Grill in November; the Evening Standard described it as “another catering operation from the Ramsay empire, assiduous and professional but somehow lacking in spirit and heart.” Plane Food, Ramsay’s Heathrow Airport restaurant, was shellacked in one review: “A £9.50 Croque Madame sandwich is an uncompromising squelch of glassy squares of lurid, cheap ham, horrid cheese and pappy bread, even if it does come flanked with epaulettes of ‘pan fried’ quail eggs to give it a faux noble bearing.”

Yet Ramsay’s effect remains so hypnotic that the Saturday after the Gazette story ran, even before any changes were made at Rôtisserie Laurier BBQ, a line snaked out the front door. Later in November, the telegenic, tousled-haired blond amped up his star wattage in Toronto at a Mount Sinai Hospital “Celebrity Cook-off” fundraiser. Kitchener, Ont., lawyer Milena Protich paid $4,000 for dinner for four at the renamed “Rôtisserie Laurier BBQ by Ramsay” when it reopens in the spring. Ramsay wowed her, Protich says. “I was very impressed by his passion and generosity of spirit. The last thing he said to me was, ‘See you in Montreal.’ ”

Marie Christine Couture, a Rôtisserie Laurier partner, isn’t concerned that Ramsay might be spreading himself too thin. He’s involved, “totally,” actively overseeing the menu and in contact through email and MMS, she says, sitting in one of the restaurant’s vinyl booths in December. “The more you have to do, the more you’re able to do,” she observes, adding Ramsay’s assistant was due shortly to work on the kitchen.

The 27-year-old has lived in the neighbourhood for decades; she speaks passionately about revitalizing the place while retaining its “spirit” and “authenticity,” so it can continue to be a place the entire family can eat together. That will be a challenge. Even pre-Ramsay, a roasted half-chicken costs $16.95.

The tweaking has begun: dark brown walls have been brightened with ivory paint; frozen fries have been replaced with fresh. The paper placemat menus will stay. “Gordon wants to keep it very casual,” she says. They’ll close for a few months to renovate in January, adding 135 spots upstairs and a bar downstairs. Nothing slick, says Couture: “Someplace comfortable to eat or have a conversation or even dine alone, more like you’re in Europe.” Closing time will be extended from 9:30 p.m. to 3 a.m. to draw the after-theatre crowd and chefs after work. “We’ll have to hire younger staff,” says Couture. There’s already talk of expansion, though not in Quebec, where St-Hubert BBQ dominates the market. “But other provinces are a possibility,” she says. “Other countries, too.”

Lavy alludes to the venture dovetailing with a new “Gordon Ramsay lifestyle” launch next year to include a food line and in-store shops in the Bay and Kmart and Sears in the U.S. He’s loath to discuss the details of the partnership: “That’s private,” he says.

Ramsay was unavailable for an interview, which isn’t surprising. His media access tends to be limited to promotional appearances. Even then, journalists routinely sign waivers promising not to ask financial or personal questions. As for how much time the great chef will spend at his latest namesake, even Couture is uncertain. “But for sure he’ll be a presence,” she says. But of course he will, even when he’s not there: his name is on the building.