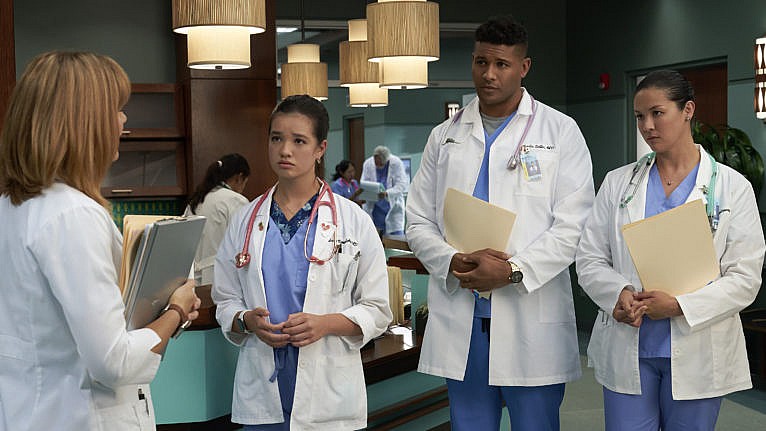 Billie Eilish: Happier Than Ever: A Love Letter to Los Angeles (Friday, September 3)

An unusual thing about this concert film is that the pop star’s new album, also entitled “Happier Than Ever,” is not on a Disney-owned label. But the promotional concert film attempts to take advantage of Disney’s multimedia power by combining live-action and animated segments: Robert Rodriguez is the director of the live-action segments, featuring Eilish performing at the Hollywood Bowl (with musical guests including L.A.’s superstar symphony conductor Gustavo Dudamel) and giving the viewers a guided tour of Los Angeles; Patrick Osborne (who worked on such Disney films as “Paperman”) directed the animated segments.

When Disney bought Fox, they had a whole library of content at their disposal that they could mine for remakes and reboots. One of the first Fox properties they managed to reboot was Doogie Howser, M.D., the Steven Bochco/David E. Kelley series that made Neil Patrick Harris a star. The new show takes the same basic premise: the title character (played by Peyton Elizabeth Lee) is a child prodigy who graduates from medical school and becomes a full-fledged surgeon at the age of 16, and must balance the life-or-death pressures of a medical career with the normal pressures of being a teenager. However, like Disney’s “High School Musical” series, the show isn’t technically a reboot, because it takes place in a universe where Doogie Howser is a TV show, and the main character is nicknamed “Doogie” because her life so closely resembles that kid from TV. Which at least sets up the possibility of a Neil Patrick Harris cameo somewhere down the line; after all, Disney now owns How I Met Your Mother too.

Every so often Disney will look at a popular Pixar movie and ask whether they have any characters they could spin off into some streaming content. This month it’s the talking dog from the movie Up, who will get his own series of animated shorts. However, because these spinoffs can’t depart very far from the world of the original movie, the entire series takes place in the backyard where the dog lives, and deals with the stuff that he observes. But at least, unlike other backyard dogs, he can say what he thinks about it.

Another series of spinoff shorts, this time showcasing the world of Japanese animation: seven different animation studios were each asked to produce a Star Wars short, reimagining some aspect of the franchise in their own distinctive style. As Disney points out in its press release, the original movie was openly influenced by Akira Kurosawa’s The Hidden Fortress, but this is a chance to see a different set of influences at work as the creators examine the cultural links between the world of anime and the world of Lucasfilm. The studios involved are Kamikaze Douga, Geno Studio (Twin Engine), Studio Colorido (Twin Engine), TRIGGER, Kinema Citrus, Science Saru, and Production I.G.

This is another Hulu production being shown in Canada on Disney+’s “adult” channel. It features Disney synergy in that it is co-created by Taika Waititi (Thor); the show, featuring a mostly-Indigenous cast and crew, is about four four teenagers (D’Pharaoh Woon-A-Tai, Devery Jacobs, Paulina Alexis and Lane Factor) who turn to crime to fund their dream of getting out of their small Oklahoma town and moving to California; the title of the show is the title they give their gang, but they may have to rethink their plans when they encounter a competing gang of juvenile delinquents.

Two years ago, no one had heard of Charli D’Amelio. Then in 2019 she began posting videos of herself dancing on TikTok, and became one of the most-followed people on social media anywhere. She then moved with her family to L.A. so she could pursue a show business career, and the new reality show follows Charli as she adjusts to her newfound stardom and tries to prove she can be famous for more than just being famous; it also looks at her sister, also a rising social-media star, and their parents, as they figure out how to raise kids who are household names.