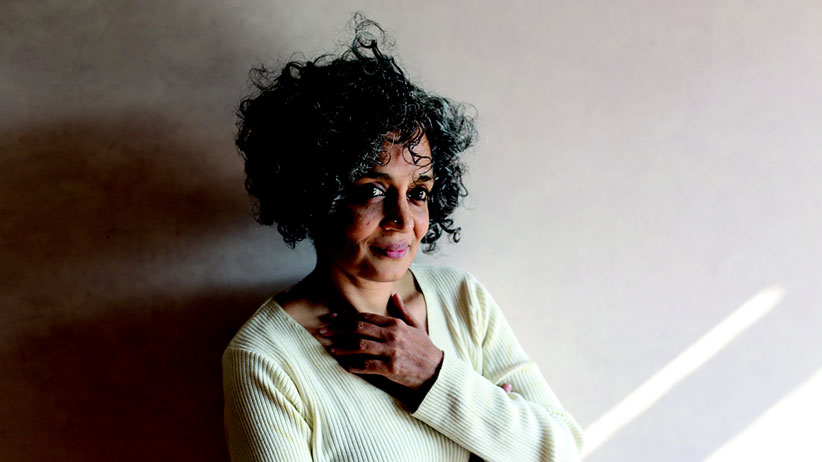 Arriving 20 years after her Booker Prize-winning debut novel The God of Small Things, Arundhati Roy’s The Ministry of Utmost Happiness is one of the most talked-about works of fiction this year. It’s a stunningly beautiful novel that wills another world to emerge from our collective darkness. Weaving the experiences and aspirations of India’s most marginalized peoples into perfect prose, Roy unveils complex characters possessed by a desire to invent new worlds even in dark times. In an era when the West is sensing the prescience of authoritarian rule, Roy’s novel is instructive: it illuminates the intelligent, critical, often rebellious perspectives of peoples belonging to a vast Indian underclass. The novel’s intersex protagonist, Anjum, subverts every social rule that empire or nation has foisted upon her. After surviving a massacre, Anjum makes her home in a derelict graveyard, which over time she transforms into a sanctuary for outcasts outfitted with a guesthouse and a funeral parlour. There, she finds happiness in the company of others both living and dead. This novel deepens the critique of violence against India’s minorities that has informed Roy’s non-fiction in the years since her first fictional masterpiece. Maclean’s spoke to Roy in Delhi, where she lives. This conversation has been edited and condensed.

Q: The novel is set mainly in the thousand-year-old city of Delhi. Does this book pay homage to your city?

A: Yes, it does. Delhi is a very maligned city, and deservedly so. Yet there’s something about it. It’s a secret city, it doesn’t hang out its wares. It’s like a very deep river. Floating right up on top are the institutions of contemporary power: government, politics, media, and by media I mean the big TV channels, many of which are competing with each other to arouse hateful feelings, and then there’s the bureaucracy, the diplomatic missions. But it’s also the city of intellectual debate, of protest, it’s the city where people from all over the country converge to express their anger. And then, underneath all that, there’s this crumbling, ancient city, a confluence of so much history. Somehow it was important to me that the city becomes a character, not just a backdrop in the book. It’s a difficult city for people who don’t know it. It’s not signposted, it’s hard for women, it’s violent and brutal, its polluted, crowded, and yet there’s something wonderful about it.

Q: Why did you decide to return to fiction after 20 years?

A: I’ve been asked this question often, and it’s a good question. But I keep saying that you should reverse the question, and ask why fiction chose to return to me. I’ve never been that person who thought that because I’ve written one novel, I should write another and another. It’s only when there was another novel to write that I was going to write another. This one started forming about 10 years ago; this story began to insist on being told. It took its time, and it was complicated in its range and chronology. The journeys I made and the experiences I had over the last 20 years accumulated in me. But I knew that this was not just information to be imparted— not arguments and facts and footnotes. Fiction is something else. It’s not about imparting information, that’s not what a novel is. The world that I began to understand could not be communicated in any other way. For example, you can’t explain just in evidence and footnotes and human rights reports the fear and terror that is in the air of Kashmir, what it means to people to have to live with this terror day and night, what a military occupation of 20 years becomes, when it seeps into the cellular structure of social life there. I think fiction can address it in ways that straightforward reportage cannot.

Q: How did the suffering of minorities in India become a part of your writing?

A: I’m so glad you use that word “minority.” I think it’s fundamental to understand that it’s not about Islam or Christianity or Hinduism or Buddhism. It’s really about majoritarianism and minorities. If you look at Indian society, it’s a society made up of minorities. There’s nobody who’s not a minority, whether it’s ethnicity, caste or religion. But the whole effort now is to confect a political constituency—an ethnic or a religious constituency that can coalesce into a political majority in order to deal with this model of representative democracy. That process has been a hundred years in the making in this part of the world. And it’s a very violent process, in terms of what it forcibly seeks to include as well as what it forcibly seeks to exclude. It’s not the same as the other strongmen that have appeared in the world, although it does coincide in timing. I’m not exaggerating in the least to say that Indian Muslims especially are living in absolute terror now. They are being ghettoized. Any protest or reaction from them runs the risk of collective punishment of the most severe nature. It’s very hard to know how it’s going to end. Of course, Dalits have lived like that forever, and women to a great extent have lived like that forever.

Q: Could you discuss the title of your book?

A: It’s been the title of my book for many years. I do believe that fundamental to any real hope is that we do need to reconstitute what has been generally handed out as the recipe for “happiness” for the human race, and what has generally been decided counts as “progress.” I think the people in the book—Anjum, Saddam, Tilo, even Musa, all of them—arrive at a different understanding of happiness, however fragile it is. They find it in unexpected ways, in the most unexpected of places.

A: It’s a ministry in any way you want it to be, either in a spiritual sense or in an absolutely bureaucratic sense.

Q: Anjum moves into the khwabgah [a house where hijras—those who are intersex and people whose gender identity is different from their biological sex—live together], although she will later leave it for the graveyard. Does the novel tell readers about the specific experience of intersex and transgender identity in India?

A: Anjum lives in the khwabgah with a whole lot of other intersex and transgender people. There’s such a variety of them: Shia, Sunni, Hindu, Christian. Some are men who dress as women, some have had surgery; some, either because of their religious beliefs or for other reasons, have not. Even inside the khwabgah, there’s a range of experiences, so varied, so difficult to classify. Yes, in India there’s been a traditional space-but-not-space for them. If you go to Old Delhi, you can see every day [what is] not a modern understanding of transgender, but what people would call hijras, who live there, who walk through the streets, but of course there’s a combination of violence and acceptance. There’s the whole idea of the holy soul [of the hijras] that’s trapped in the body, and so people are frightened of their curses. It’s now modernizing into a more rights-based and gender studies discourse. But I do want to stress that in the novel, Anjum is a quirky individual. She is not meant to represent a whole community. Not any more or less than any of the other characters. Then there are borders running through all of them: in Anjum’s case it’s gender, in Tilo’s case it’s caste, in Saddam’s case it’s conversion from technically Hindu to Muslim, in Musa’s case it’s a geographical national border, in Garson Hobart’s case he’s half the voice of the establishment and half a drunk, lovelorn guy. All of them have this “Indo-Pak” [border], as Nimmo Gorakhpuri puts it, running through them.

Q: In spite of their tribulations, the characters demonstrate an aspiration to remake themselves. Where does that hope for a better life come from?

A: In all my travelling into the heart of so many struggles, and so much apparent darkness, you do see that ability to be tender, or to share a joke, or share a cigarette, or share a cup of tea—it doesn’t get stamped out. People can be extraordinarily resilient and show extraordinary grace and humour even in moments of tribulation. I’ve always found that it’s much easier for people who are not terribly, badly off to lose hope and to be pessimistic. But when I went into the forest in Central India and walked for weeks with the guerrilla squads, we spent so much time laughing at the absurdity of things even though the situation was so dire. I suppose that [when] you are in a situation like that, you have to be present, you have to think about it, there’s not much scope for self-pity. But it’s not all steely resolve and graveyard humour, it’s also very terrible, very depressing and broken. But it’s never one thing. It’s never one feeling that you have, it’s always a thousand.

Q: Is the psychic pain that many of the characters experience a contemporary sickness?

A: No, I don’t see it in those terms at all. These are such ancient things, and sometimes trying to diagnose them reduces them. And I don’t think that they’re all suffering all the time. They deal with pain, and then— look at Tilo’s storybook, the Reader’s Digest Book. The author’s so funny. There’s so much tenderness. It’s not just pain, sadness and gloom. It’s beauty too. And Anjum is capable of such laughter, anger and arbitrariness, doing up her house, celebrating the arrival of Miss Jebeen and loving her so much. Making a local zoo, and trying to make a swimming pool. The whole point of it is that they’re capable of being so hilarious, and they refuse to just lie down and be sad. [At the end], they go off to a mall on the edge of the city in a purloined Mercedes…

Q: Revolution appears in the armed struggles of Kashmir and in the forests, while in the city, people occupy public squares, go on hunger strikes, write political pamphlets; anarchism on the streets opens the space for new communities. But the novel does end with a Red salute [a Communist greeting]…

A: The novel doesn’t end with a Red salute. Only Comrade Revathy’s letter ends with the Red salute, Lal Salaam! To which Anjum responds with an inadvertent Lal Salaam Aleikum, which is a combination of a Communist salute and a Muslim greeting, a strange thing to say. And then she is troubled by the idea that Communists don’t have a ritual or a prayer for their dead!

Q: It’s about revolution, how people live it?

A: How people live it, even if they know they may not win.

Q: Would you be thinking about writing another novel?

A: I have absolutely no idea what I’ll be doing. I’m not somebody who plans my life. In fact, I don’t know what’s going to happen here in India, it’s such a strange climate here at the moment. So very worrying. So, we’ll see. I spent so many years writing this book and I’ll see it through, and then I don’t know what will come to me, what will be my story. I don’t know!