Why Fabergé never goes out of style

The Russian treasures embody both artistry and tragedy 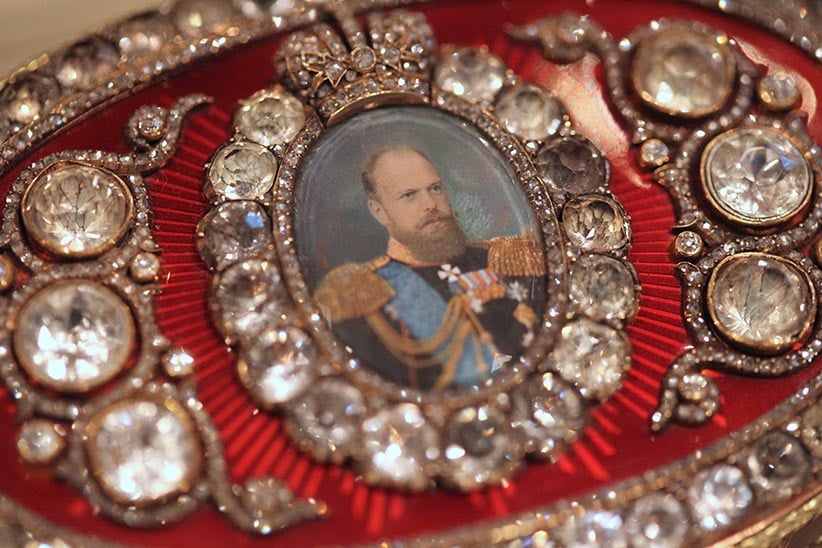 Detail of The Bismarck Box, Faberge, 1884. The large “diamonds” surrounding the miniature portrait of Tsar Alexander III are in fact paste (rhinestones), the originals have been used by the Bismarck family for the Bismarck necklace, still in the family’s possession today. (Arts Alliance)

Carl Fabergé didn’t have much time for competitors such as Cartier, Boucheron and Tiffany. “They are people of commerce,” he sniffed. By contrast, the Russian craftsman called himself “an artist jeweller.” Today, his competitors are still going strong, yet it’s Fabergé whose name and creations are arguably the most famous, the most mythical of all jewellers. Now a new documentary and book detail how the Fabergé firm achieved and maintained its worldwide fame, a century after so many other Russian firms were consigned to dusty history books during the Bolshevik Revolution.

On Monday, June 29, Cineplex theatres across Canada begin airing Fabergé: A Life of Its Own, which explores how Carl Fabergé transformed a small family store into an international powerhouse frequented by all the crowned heads of the world, as well as wealthy aristocrats and merchants. Then came its denouement. The Russian Revolution destroyed Fabergé’s business and his will; he died in 1920 in Switzerland. After seeing the family’s name tarnished by being marketed on shampoos, perfumes and even a toilet cleaner, the famous brand has risen again, and is, once again, a luxury jewellery firm.

The London outlet of Fabergé is on Grafton Street, its facade clad to resemble the famous guilloche enamelling (precisely engraved metal covered with translucent enamel that allows the pattern in the metal to show through) that the firm perfected. While the store resembles a bright-purple jewel box, next door is the plain, elegant front of Wartski. That famous jewellery firm is celebrating its 150th anniversary with a newly published and lavishly illustrated history written by managing director Geoffrey Munn (Antiques Roadshow). It was never a big creator of jewellery, instead making its reputation by buying and selling the best available on the world market. The highlights of the book, optimistically titled Wartski: The First One Hundred and Fifty Years, are the thick sections on works of art by Fabergé. Ever since the Russian firm closed, Wartski has been one of the leading Western jewellers selling Fabergé treasures. Some of its discerning clients include Queen Mary, as well as the late comedian Joan Rivers. And through a series of blockbuster exhibitions held at the store, or organized with Wartski’s help, it has done much to fuel a renewed fascination with all things Fabergé. Museum exhibitions, including last year’s in Montreal, are guaranteed blockbusters, while new books devoted to the Russian craftsmen are constantly being published. (The Toronto Public Library has 45 on the topic.)

Part of the attraction is the sheer volume and variety of pieces that bear the famous name. During Carl Fabergé’s 35-year tenure as head of the firm, from 1882 to the revolution, it created roughly 200,000 unique objects—everything from pins, brooches and bracelets, to umbrella handles and picture frames, as well as tiaras, opulent boxes and all sorts of objets d’art. No piece could be too fanciful or frivolous. For what set the original eponymous firm apart was an intense drive to create the most wondrous objects possible. The workshops employed 300 goldsmiths, stone carvers and enamellists, who had modern conveniences, including electricity, as well as a doctor and a canteen. Most were Finnish or Scandinavian. And, unique for such a famous firm, Fabergé’s work masters owned their own firms under the Fabergé umbrella, and signed their own initials to their creations. Such is their distinctive style that experts can identify individual pieces before checking the marks. 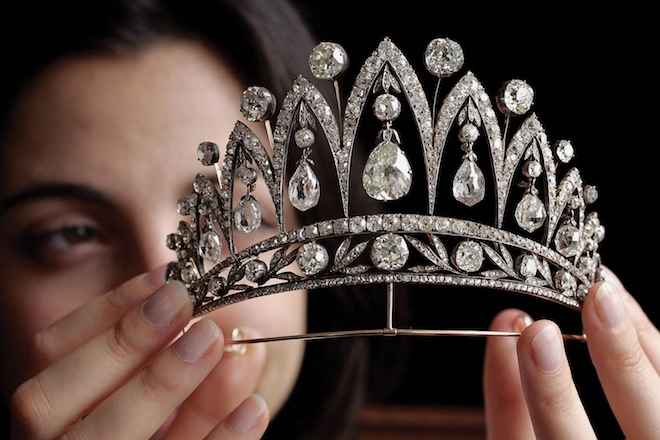 While Fabergé’s craftsmen used precious stones with abandon, they were equally happy to choose inexpensive stones, if that suited the objects being created. So, while Easter eggs destined for Russia’s imperial family were strewn with diamonds, costly enamels and metals, they also created a miniature ostrich from a single piece of striated agate, and a chalcedony dormouse with sapphire eyes and platinum whiskers. (Britain’s Queen Alexandra purchased it for 33 pounds in 1912, the same cost as a first-class ticket on the Titanic.)

In the collection of Queen Elizabeth II is an imperial Easter egg fashioned as a basket of flowers. Presented by Czar Nicholas to his wife at Easter in 1901, its wildflowers are as natural as if they were picked that morning, instead of fashioned out of stone and gems. Originally, it cost nearly 7,000 roubles, but, by the time the Soviets sold it in 1933, the price had collapsed to 2,000 roubles. Smaller items were being hawked for a British pound or two each. As the documentary explains, it was hard to find buyers for those second-hand, old-fashioned items in the middle of a Depression, when fashion revolved around art deco style. However, later that year, the Queen’s grandmother, Queen Mary, acquired the egg for the royal family’s extensive collection.

She wasn’t alone. Others were drawn to the quality and mystique of anything with ties to the tragic Romanov family. Those intrigued by the provenance, and the heritage, bought with abandon, including heiresses such as Marjorie Merriweather-Post. The Soviets were selling off treasures with such alacrity that the communists depressed the prices of luxury items. In 1927, Christie’s auction house sold off a good chunk of the Russian crown jewels. That was also the year Wartski started selling large quantities of Fabergé items, such as a rock crystal box carved to simulate a segment of orange. Other treasures soon made their way through Wartski’s London store to collections around the world.

Soon, the Soviets were parting with the greatest treasures of all: the Easter eggs. Munn uses documents, records and circumstantial evidence to tally which ones made it to Wartski, including the Peacock, Swan, Diamond Trellis, Cockerel, Rose Bud, Colonnade, Lilies of the Valley, Coronation Coach, Bay Tree and the Blue Serpent Clock. The most mysterious was the small Nécessaire Egg of 1889, set with diamonds, rubies and emeralds. In 1949, it was sold to a walk-in stranger for 1,250 pounds cash. And vanished without a trace. 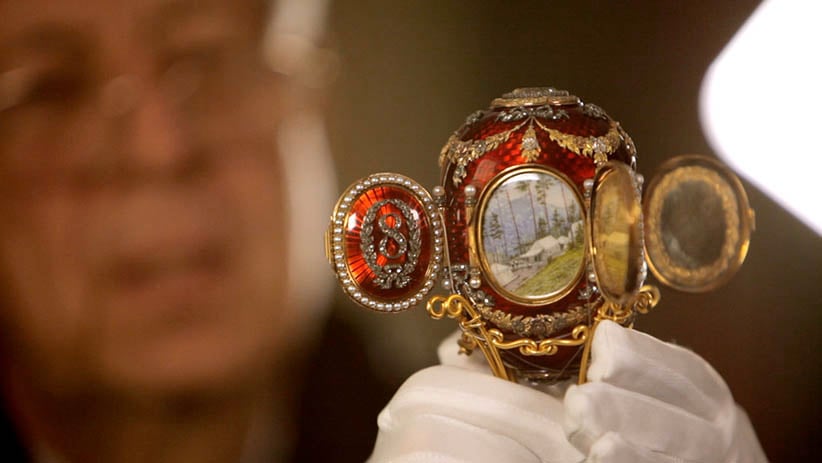 Of the 50 imperial Easter eggs made by Fabergé, eight were assumed lost forever. That count was revised last year when one of the long-missing eggs, the Third from 1887, went on display at Wartski. It was shown for three days and was seen by thousands who queued patiently for a glimpse. It was the 13th such egg to go through the hands of the venerable store. The egg’s dramatic saga is in both the book and the documentary. Assumed lost, the golden egg had long been stripped of its Fabergé identity, when it ended up being sold recently for $14,000 as scrap metal in the United States. Then the price of gold collapsed, and the owner, realizing he’d overpaid for the piece, searched the Internet for “egg” and “Vacheron Constantin,” the name inscribed on the clock inside the egg. He was hoping that maybe its artistic value would make up for some of the scrap-metal losses. Up came an article describing a renewed hunt for the missing Fabergé creation. And a picture. One of those involved in the quest was Wartski. After being contacted by the anonymous owner, the company bought the egg for a reported $40 million and sold it to a buyer, assumed to be a Russian oligarch.

That spectacular discovery and return on investment may not be a one-off. There are still seven missing eggs. Some are thought to be in Britain, perhaps others hidden in Russia. Anyone who finds one is guaranteed two things: a fortune, and a permanent spot in the intriguing lore of Fabergé. 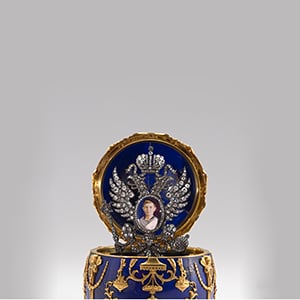