Why Loto-Québec never should have bankrolled a Robuchon resto 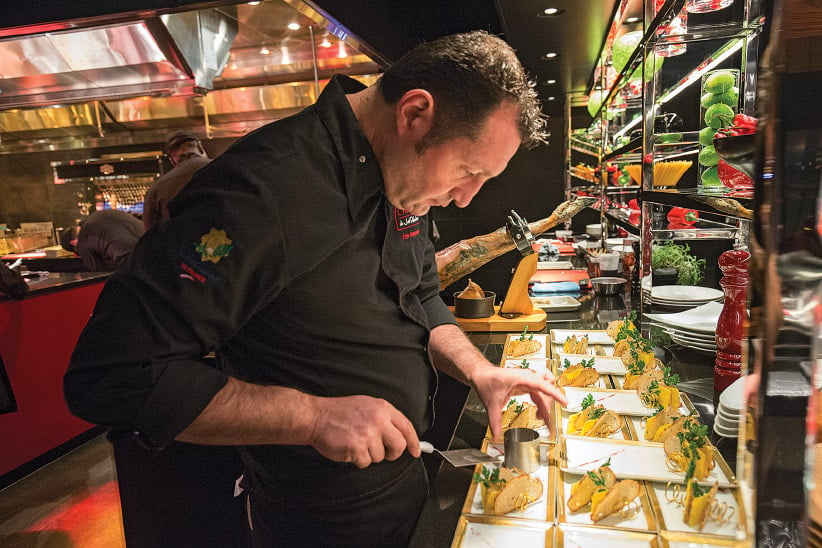 Chef Eric Gonzalez is seen preparing the “Salmon Tartare with Caviar” dish at the Restaurant L’Atelier de Joël Robuchon on Saturday, February 25, 2017, at the Montreal Casino, in Montreal, Quebec. (Photograph by Giovanni Capriotti)

Even when compared to such luminous contemporaries as Alain Ducasse, Guy Savoy or Alain Passard, chef Joël Robuchon is incontestably a giant. At the age of 31, in 1976, he was named a Meilleur Ouvrier de France. Ever since—more or less uninterrupted—he has gobbled up Michelin stars like Wayne Gretzky did points in his prime. Today, his 23 restaurants hold a previously unthinkable 31 étoiles among them.

So if I told you that in December, the esteemed Frenchman had opened his first Canadian restaurant, L’Atelier de Joël Robuchon in Montreal, and that if you wanted you could book a couple of his best seats tonight, no problem, you would probably think I was joking.

Not so. Last time I logged on to the reservation system—on a Wednesday in late February—it showed availability pretty much whenever I might want it. There were no fewer than five time slots free the following evening. Even the upcoming Saturday had openings. And the restaurant has but a modest 56 seats. “You can’t get a table at my restaurant for 12 weeks,” David McMillan says of his leading Montreal establishment Joe Beef, which is larger, and nearly two decades older, and cost immeasurably less to build. “They’ve already failed.”

​Well, yes, it does look that way. The reasons are multifold. But there is really only one that counts: Loto-Québec, and the ludicrous taxpayer-funded contract it drafted to lure a Robuchon franchise to its grim Casino de Montréal. The Crown corporation will reveal almost nothing of the contract other than to admit it paid almost $11 million for the franchise—the 10th iteration of a nearly 15-year-old restaurant concept. Loto-Québec will not even confirm whether Robuchon is obliged to ever visit, never mind take a whirl through the kitchen.

Nonetheless, when an angry opposition brought up the prickly issue in the National Assembly in late February, the ruling Liberal Party’s minister of finance, Carlos Leitão, implausibly asserted that Robuchon would help raise Quebec’s culinary game and “put us on the same playing field as London, Paris, Tokyo or New York.”

Oh dear. One hopes that it didn’t take too much publicly funded travel and culinary research to work out that all those fine cities did at one time have Joël Robuchon restaurants. But L’Atelier de Joël Robuchon in NYC was a flop and closed years ago.

Don’t get me wrong: I loved my meal at the original L’Atelier in Paris, back when it opened in 2003. But the Japanese-inspired tasting-bar idea of the place is hardly cutting-edge any longer. Nor is there any boldness left in its mission statement that fine dining should be enjoyed without the usual pomp and affectations. Early last year, when news of the Robuchon deal was first making the circuit, great Montreal chefs like Normand Laprise were already confiding their displeasure. It had nothing to do with Robuchon’s cooking. They just found it objectionable that Loto-Québec would use provincial taxpayers’ money to subsidize a foreigner to compete with overtaxed domestic businesses, like Laprise’s Toqué! Or, for that matter, Maison Boulud, another great Montreal fine-dining restaurant helmed by a superstar French chef with whom, by contrast, everyone is happy to compete—in large part because the establishment was not government-financed (and, nota bene Loto-Québec, the bigger, far more handsome set-up cost less than $4 million, all in).

Now that the assumed scope of the deal is public and reports are out of a $40,000 expenditure on Christofle cutlery, with another $40,000 on Limoges Bernardaud dinnerware, that distaste has turned to anger—mostly at Loto-Québec. For keeping the terms of the Robuchon deal secret, for pretending that the restaurant promotes Quebec while never bothering to consult the local culinary establishment. McMillan concurs with Laprise, who says, “We could have all sat down with some top-tier marketing company like Sid Lee and have done it all for $1 million.”

Now, Loto-Québec has a lot of bad headlines, and probably yet another expensive Casino de Montréal restaurant failure in the making. The food may be great. But it seems highly unlikely that a place that was supposed to raise the bar for Quebec will really do so.

Éric Gonzalez, chef at L’Atelier, is undoubtedly talented. But if his intention was ever to raise the bar in Montreal, he’s already had 15 years at places like Cube, L’Auberge Saint-Gabriel and XO to at least hint at it. Does he now expect to make a culinary splash with reruns of old L’Atelier menu items like jamón ibérico with tomato toast, oeufs en cocottes and quail stuffed with foie gras, all of which I remember eating at the original in Paris?

Thanks to our tanking dollar, they are cheaper here now, but that’s not enough to drive tourism to Montreal any more than the casino itself, which has really only succeeded in pulling poor Quebec retirees out of their bingo halls to plug them into government-owned slot machines instead. If you’ve actually seen the place, you would know that the celebrity chef they really needed was neither French nor local, but the fat guy from that TV show Diners, Drive-Ins and Dives, Guy Fieri. 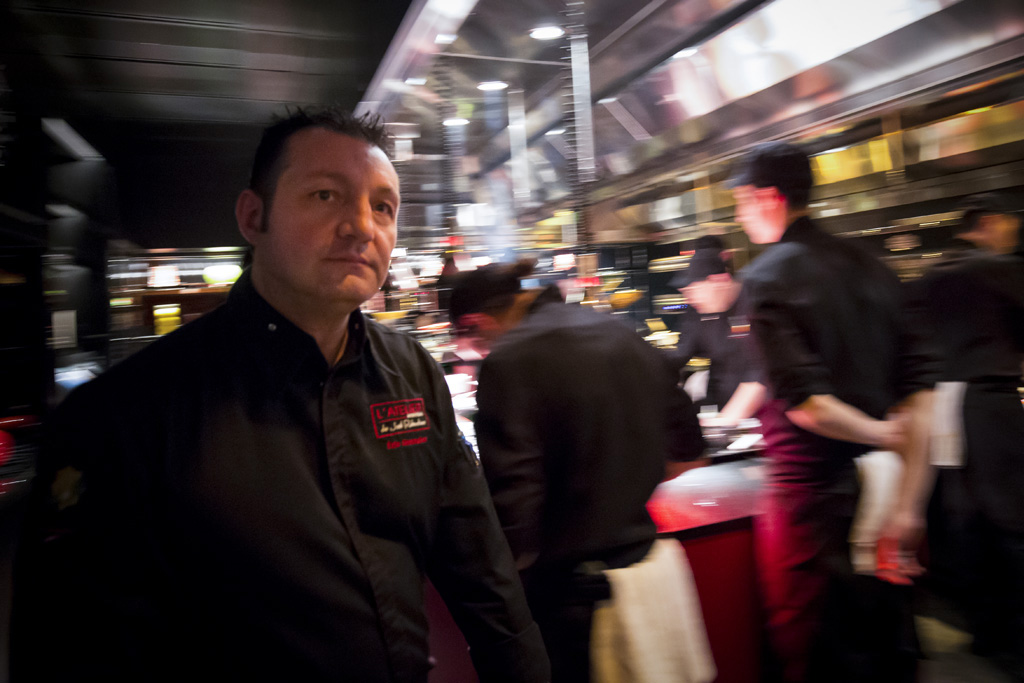 Chef Eric Gonzalez, left, is seen in the kitchen of the Restaurant L’Atelier de Joël Robuchon on Saturday, February 25, 2017, at the Montreal Casino, in Montreal, Quebec.