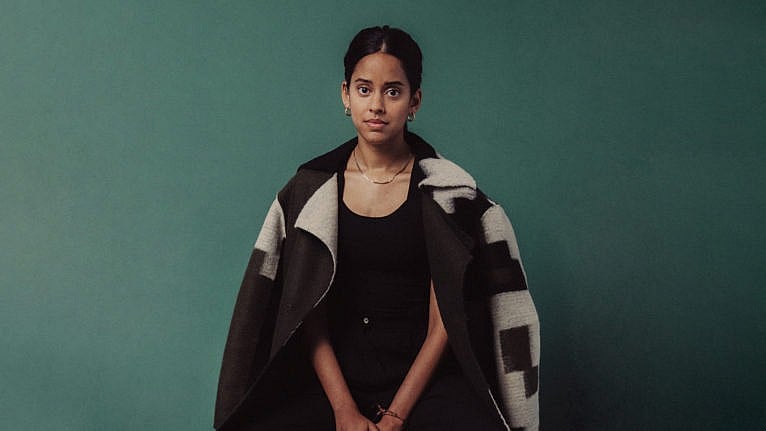 (Photography by Vishal Marapon, Hair and makeup by Erin Klassen)

As a child, Sujitha Shivajothi used her tiny fingers to tack down fabric as her mother ironed crisp pleats into her saris. These days, the 31-year-old designer manipulates Italian wool and silk organza to create the exquisite anti-basic basics from her very own gender-neutral fashion line, Shivajothi.

Her unconventional aesthetic—multi-material jackets, dress shirts with collars intentionally askew—was forged while growing up in Vancouver with her frugal Sri Lankan parents. “Repairing and reusing were huge in our household,” Shivajothi says. “I have bags of scrap fabric in my sewing room. I don’t throw anything out.”

Shivajothi was always fashion-obsessed, but by 2018, she was working in event planning to pay off the loans she used to fund her political science degree from the University of British Columbia. Twice a week, she took private sewing lessons from local pro Sheila Wong in Vancouver’s Yaletown neighbourhood. She soon realized she’d be consumed with regret if she didn’t try designing in earnest. Shivajothi quit her day job and enrolled in the one-year fashion design program at Blanche Macdonald Centre. “My parents were slightly concerned, but they always supported me,” she says.

After graduating in 2020, she received the school’s Emerging Designer Scholarship to show her first collection—full of stylish yet utilitarian coats and trousers—at Vancouver Fashion Week, or VFW. Two long years later, her eponymous line, Shivajothi, made its debut last April. “COVID gave me time to come up with a collection that I felt proud of,” she says. In September, Shivajothi brought her creations to New York Fashion Week as part of the Global Fashion Collective, which connects emerging designers with international networks.

“Gender-neutral” has been a fashion buzzword for years, with luxury brands like Marc Jacobs and Gucci expanding into the category. Shivajothi, on the other hand, was always dissatisfied with the pieces on the rack. “A lot of what is classified as gender-neutral is just oversized garments, like hoodies or sweatpants,” she says. When her Shivajothi line shows at VFW for a second time this month, true to form, it’ll include a mix of tailored pieces with forward-thinking flair. Shivajothi’s father, once confused by her distaste for dresses, now serves as a muse.

FILED UNDER: The Prospect