With robots, humanity can meet its full potential: unlimited napping

Feschuk: Will robots really allow us to flourish, or will we just sink deeper as a species into the couch? 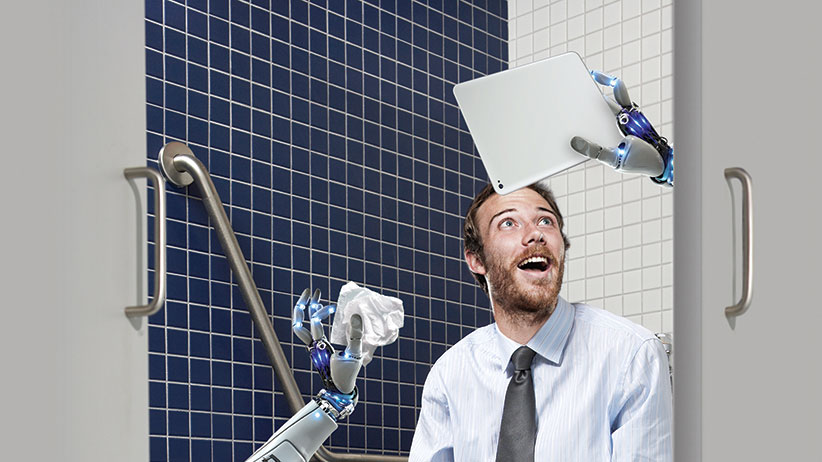 It has been some time since we turned our thoughts to the sleek, shiny machines that will make humans a lot more comfortable, a lot more efficient and, come the dawn of the inevitable robot uprising, a lot more murdered.

Weirdly, many people seem to have softened on the threat posed by the robo-menace. There’s been a run of articles along the lines of “Hang on, maybe robots won’t one day harvest our vital organs with soup spoons in a swift and unrelenting genocide against their hubristic creators. Maybe instead they will forever perform our most tedious tasks and allow humanity to flourish!”

That’s how one British columnist put it, by the way. He said robots will “allow humanity to flourish.” Seems pretty far-fetched, if you ask me. Do we seem like a civilization that’s just a little free time away from flourishing? Our only achievement of note in this century is cinnamon bun–flavoured Oreos.

Given unlimited leisure provided by robot servitude, here’s what humanity would actually do:

4. Promise to get around to flourishing tomorrow.

What’s the latest in our fateful march toward the Robocalypse? Well, the Russians have unveiled a “fully automated combat module” that can make decisions on its own. The U.S. Army is getting closer to automating some of its tanks. And a Silicon Valley restaurant just unveiled the world’s first salad robot. Amid the wails and screams of the unceasing robot murder spree, only the least fortunate among us will know the horror of death by julienning.

READ: Stop! We must take you to Buttbot

There’s also news out of Britain: scientists have developed the world’s smallest surgical robot. The device is capable of carrying out a range of procedures, including hernia repairs, colorectal operations and the “accidental” removal of every one of your bones.

Not every development seems threatening on its face, of course. One appliance company has come up with a prototype for an autonomous fridge that comes when you call it. This sounds: a) like the height of laziness from a society that has truly lost its way, and b) also kind of awesome.

It also raises troubling questions. For instance, will I still have to get up to pee as though I’m living in the Middle Ages? I will? Thanks for nothing, human ingenuity.

At least I won’t have to make the bathroom journey on my own. The tech company Robo-team has developed a rolling robot called Temi, so you can video chat, watch TV or use Google as you move around your home.

We all have phones. We do not need this device. So let’s hear the company’s CEO explain why we need this device: “We are spending so much time looking into a smartphone, we forget to spend time with our family and important people,” he says. “Only a moving device will really be able to serve you, to come when called.” In other words, the solution to too much tech is . . . more tech. Hmm, that philosophy didn’t work when I tried it with debt and tequila, but maybe third time’s the charm.

Perhaps I over-worry when it comes to human extinction. Max Tegmark, an artificial intelligence expert, suggests we put aside fears of our collective end coming at the cold hand of Terminator-style robots. Our actual deaths, he says, will likely be way more hilarious.

Tegmark gives an example: someone programs an AI to produce paper clips. Well, guess what? Paper clips are made of atoms. And you know what happens to be a handy source of atoms? Human bodies. Or maybe we instruct robots to maximize human happiness. And the bots decide to put our brains into a virtual reality simulator or, even worse, force us to watch that TV show where Mandy Moore is always learning life lessons. Either way, a chilling dystopia awaits.

Is the robot uprising imminent? Probably not. The makers of a new $3,500 robot boast that it can avoid obstacles, hear voices and recognize when someone enters the room. If they can program it to stare expectantly when someone eats chicken wings, it will be exactly as advanced as my dog.

Still, we must remain vigilant. A company just put out a humanoid robot that is programmed to dance over and over in demo mode to only one song: “Gangnam Style.” The thing’s got an airtight case for revolution.