You call that a masala chai? 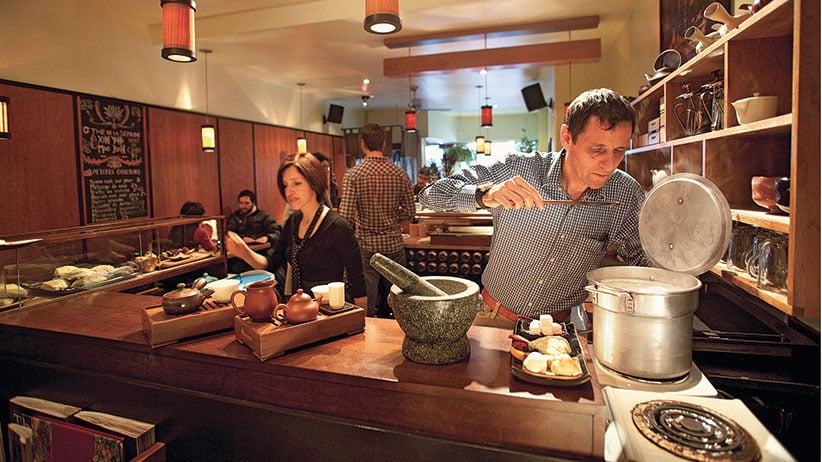 “I’ve waited 45 minutes for a seat,” said 33-year-old eldercare provider Marie-Anik Boulay, as she slipped into a booth at Camellia Sinensis, a tea house in Montreal that serves masala chai only once a week, on Mondays between 5 and 7 p.m. The owners have been known to drag heat lamps outside to warm clients lining up in -18° C weather. Once inside, there are house rules: no cellphones, no laptops, no iPad-type readers of any stripe. A gong is sounded when the noise level would displease a vigilant librarian.

“It’s very popular, but we don’t offer the masala chai every day because of its overpowering aroma. We must maintain a neutral tea-tasting environment for clients who drink other teas,” explained co-owner Kevin Gascoyne, thumbing through his 16-page tea menu. Masala chai is buried on the last page. “People are demanding a more authentic chai experience than they get at a coffee shop. They have standards.”

“They” are the growing minority of masala chai snobs. “The demand for better masala chai can be explained by what happened to yoga,” noted Venk Prabhu, owner of Shanti Tea, a tea importer and distributor that opened its first retail location in Ottawa in December. “People realized that yoga was more than just exercise. They realized, ‘Hey, we’re only doing part of the practice. We want to be purists.’ Same goes for chai.”

Purists soon hit a snag. “Don’t let anyone tell you there is one ‘real’ way to make masala chai,” said restaurateur and cookbook author Meeru Dhalwala. “When we opened Vij’s [in Vancouver] 16 years ago, chai was exotic. We served it to people waiting for their food. Now it’s everywhere. There are two general types—urban Indian chai, made with more water, and village chai, made with a gallon of milk and sugar to fill you up.” The staff at Vij’s make their own milky chai every morning with Indian thyme and black cardamom, to prevent catching colds. In the afternoon, they make a brew with green cardamom and fewer spices. “I can’t stand the filminess of the milk,” said Dhalwala. “We serve customers the more urban chai.”

Trudy Ann Tellis’s family recipe is such a hit that she sells her Trudy Ann’s Bombay Masala Chai in small batches at farmers’ markets in the Vancouver area and ships packages off to fans in California and afar. The product has also inspired “the cult of Trudy Ann”—customers who follow her around town each week. “Canadians ask me two things. ‘What’s your Indian name?’ and ‘What’s your chai recipe?’ I don’t say anything,” laughs Tellis.

The Chai Company is a 10-year-old Canadian operation that sells a microbrewed liquid concentrate, the recipe for which comes from the Karakorum region of Pakistan. “You know who tests it?” said brewmaster Jonathon Markham. “The East Indian truck drivers. If it’s better than their mom’s chai, we’re satisfied. You see, we don’t dilute it to appeal to a mass-consumption market.”

There may be no “real” Indian recipe for masala chai, but there is consensus among connoisseurs on what it isn’t: chai served in coffee chains. “I refuse to order a chai at Starbucks,” said yogi Farah Moolji Nazarali, a self-described chai snob. “It tastes so sweet. Tea is not a dessert for me.”

Despite such comments, Starbucks stands by its brand-name Tazo chai. “Just because we’re big, I’d hate to think people assume we don’t pay attention to the details,” said Keith Hutjens, director of tea procurement at Tazo. “Our chai is fresh brewed before it goes into the tetra pack. Not everyone does that. We taste our tea five times during the process to check the flavour profile.”

Still, chai snobs dislike what Tanya Maldonado, owner of Skaktea in Vancouver, calls the chain store’s “grab-and-go mentality.” The backlash doesn’t surprise Ron Sadler, managing director of Twinings Canada. Twinings didn’t get into the chai game until last year, when they launched three tea bag products. “We hung back and did research, learning about the growing dissatisfaction with chai served at coffee shops,” he explained. “We learned that chai is all about having that Zen moment and lingering. Customers acquire a more sophisticated palate and aspire to another level.”