A B.C. pipeline spill would be inevitable. But who would pay? 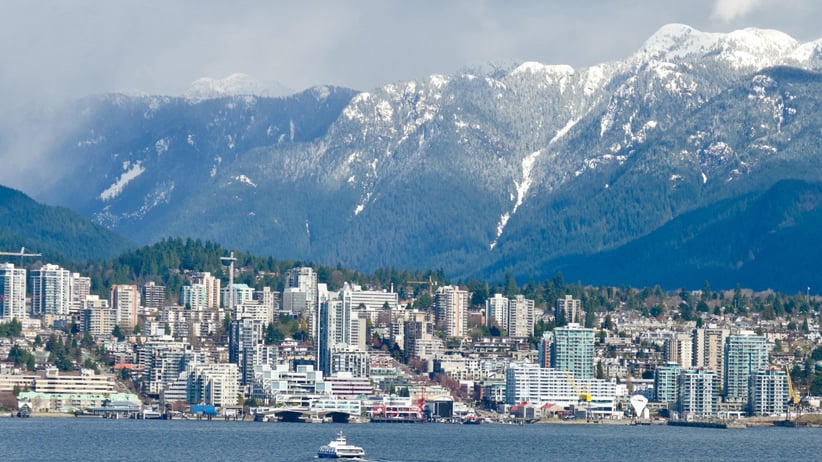 Vancouver’s Second Narrows Bridge offers spectacular views of the city skyline and Pacific Ocean on one side and Burrard Inlet on the other. The latter is a near pristine fjord covered in hemlock, Douglas fir and spruce in the shadow of Burnaby and Seymour mountains. Its cold, deep waters are inhabited by chinook and coho salmon, pods of majestic orca whales and Kinder Morgan’s Westridge Marine Terminal.

If the Texas company’s plan for expanding its Trans Mountain pipeline linking Edmonton to Burnaby, B.C., is completed, the risk of irreparable damage to Burrard Inlet and Vancouver’s entire marine ecosystem would rise to a high level.

That’s because the proposed expansion will allow for the equivalent of 890,000 barrels of diluted bitumen per day from Alberta’s oil sands to be loaded onto supertankers for export to international markets, mainly in Asia. This would result in a fourfold increase in tanker traffic through Burrard Inlet to 444 vessels per year.

But questions about the role of liability insurance, and who pays for cleaning up an oil spill in a worst case scenario, have been conveniently ignored by Ottawa, Kinder Morgan, regulators and the oil industry. They are in other words a kind of flight recorder waiting to be opened in the event that Trans Mountain crashes in spectacular fashion.

READ MORE: Why the Keystone spill poses a serious problem for the whole oil sands sector

Amidst the controversy swirling around Trans Mountain, Kinder Morgan has asked the National Energy Board (NEB) to convene public hearings this month into allegations that the City of Burnaby is attempting to block the pipeline’s construction by deliberately delaying permits.

If that’s true, can Burnaby be blamed? What city in its right mind would welcome a gargantuan oil terminus and its associated environmental risks? If there is a spill on land or water, what assurances do Burnaby and the Lower Mainland of B.C. have that its ecosystem can ever be fully restored? Or that taxpayers will not get stuck footing a majority of the bill if a really bad marine spill threatens to bankrupt Kinder Morgan? The Wall Street bank bailouts of 2008 should serve as a reminder of how horribly wrong things can go for even enormous well-capitalized corporations who have the public’s trust.

The Trans Mountain project, embraced by Prime Minister Justin Trudeau, is expected to create 50 permanent jobs in B.C. and make a moderate contribution to the provincial tax base. On the other side of the ledger, an oil spill in Burrard Inlet would put at risk industries, including tourism, real estate and agriculture, that together employ over 200,000 people, according to Vancouver-based CRED (Conversations for Responsible Economic Development), a non-profit research and advocacy group.

B.C.’s new NDP government is trying to block expansion of the Trans Mountain in court by arguing that Ottawa failed to evaluate the project’s risks to the marine environment, which B.C. says is a breach of its obligation to consider the national interest.

It remains to be seen whether this tack will be successful. In the end environmental reviews and indigenous protests may not be the most effective legal strategy to take in blocking pipeline projects. Requiring Kinder Morgan and others to provide proof that they have adequate resources at their immediate disposal to clean up a bad oil spill might be the legal approach with better odds.

Pipelines are a risky business. Just last week, 5,000 barrels of oil leaked out ofTransCanada’s Keystone pipeline in South Dakota, the latest of several major pipeline spills in recent years in Canada and the U.S. Two in Saskatchewan from pipelines operated by Husky Energy and Tundra Energy Marketing have released a combined total of about 2,600 barrels of oil into the environment.

But what really scares B.C. is the ominous shadow of a nearly three-decades old marine disaster on the West Coast that is of an entirely different order of magnitude. The Exxon Valdez oil spill in Alaska’s Prince William Sound released 260,000 barrels of oil into the North Pacific in March 1989, contaminating a 2,000 km stretch of gorgeous coastline near Anchorage. The cost of cleanup for Exxon was US$3.5 billion (US$6.3 billion adjusted for inflation). Because the sound is in cold water, like Burrard Inlet, the organisms that break down oil were only partially effective and the spill was never fully cleaned up.

In the immediate aftermath, the tourism industry lost over 26,000 jobs and more than US$2.4 billion in revenue. An Alaskan court ordered Exxon to pay a further US$5 billion in punitive damages in 1994. After 14 years of lawsuits and appeals, the U.S. Supreme Court ruled that Exxon only owed US$507.5 million.

By comparison, the supertankers that will be loaded at the Westridge Marine Terminal will each carry about 575,000 barrels of oil—more than double the Exxon Valdez spill. With much higher marine traffic than exists today, what if two of these supertankers collide in the middle of the night and spew their combined cargo into the narrow straights of Burrard Inlet? The resulting environmental disaster would dwarf the Exxon Valdez and cost tens of billions of dollars.

In the event of an accident, Kinder Morgan has pledged to do no more than comply with federal laws, which stipulate that operators of a major oil pipeline in this country must have a minimum of $1 billion in financial resources available to cover liabilities related to a land spill. If a spill were to occur at the Westridge Marine Terminal, the same law would likely apply.

The Exxon Valdez oil disaster shows how woefully inadequate that sum of money would be. In the event of a major spill, taxpayers would likely be responsible for shouldering most of the cleanup cost, which could easily surpass $10 billion, according to the advocacy group CRED.

The Deepwater Horizon explosion and oil spill on the Gulf Coast in 2010 cost British Petroleum a total of US$62 billion. BP, whose net worth is about $100 billion, paid the full cost out of pocket. Kinder Morgan has nowhere near the financial resources of BP.

In its disclosure of responsibility, Kinder Morgan makes no mention of carrying liability insurance of any kind to cover the cost of a major spill. The likely reason is that insurers are unwilling to provide adequate coverage.

Kenneth Abraham, a leading insurance scholar and professor at the University of Virginia School of Law, says that since the mid-1980s the insurance industry has been reluctant to insure for property losses caused by pollution, and terrified of insuring against liability for pollution, including oil spills.

The result is a permanent mismatch between potential losses by pipeline operators such as Kinder Morgan and TransCanada, and the maximum protection they can obtain from insurance policies.

When a Montreal, Maine & Atlantic (MM&A) train loaded with crude oil jumped the tracks in Quebec’s Lac-Mégantic, the fiery explosions that resulted from the crash destroyed a portion of the town and killed 47 people. MM&A’s third-party liability insurance was worth just $25 million, a tiny fraction of the cleanup and rebuilding costs and compensation for victims. The Quebec government has submitted a claim against the rail company for more than $400 million.

MM&A has been granted creditor protection and is under court supervision while it deals with claims related to the derailment.

If the market is unwilling to adequately insure pipeline and oil tanker operators because their ventures are too risky, then they should not receive regulatory approval. Michael Greenstone, a professor of environmental economics at the Massachusetts Institute of Technology, says that removing, or at least significantly increasing liability caps, is the most effective way of synchronizing the interests of the oil industry with that of the public.

He also argues that the industry should be required to either provide proof of necessary insurance or certificates of financial responsibility.

Kinder Morgan bears no liability for oil spills originating from a tanker that docks at its oil terminus, but this too should be changed, requiring the pipeline operator to share the liability as long as the tanker is in Canadian waters. This will provide a much needed incentive to ensure these supertankers, some longer than Vancouver’s tallest building, the 62-storey Shangri-La Hotel on West Georgia, are properly maintained and operated. The Exxon Valdez ran aground because its captain was reportedly intoxicated.

Without these additional checks and balances, the moral hazard is transferred to taxpayers, who could find themselves on the hook for billions of dollars in the event of a major spill. Kinder Morgan might think twice about expanding Trans Mountain if it knew a spill might wipe it out financially.

The primary beneficiaries of the Trans Mountain pipeline are Houston’s Kinder Morgan, Alberta’s slumping oil sector, controlled by foreign multinationals such as Exxon and Shell, and export markets in Asia, primarily China. It does nothing to enhance Canada’s energy security, and very little to boost the Canadian economy.

It does, however, seriously imperil B.C., particularly its tourism sector, which employs over 127,000 people and contributes $7.7 billion to GDP. To say nothing of the potential damage to one of the world’s richest and most complex marine ecosystems, and a West Coast lifestyle to which ocean sports such as kayaking and wind surfing are considered sacred.

Trudeau has never really explained why he wants Trans Mountain to go ahead, but it suggests he refuses to see the high stakes of his environmental gamble. In view of this, the PM’s preachy environmental advocacy in other areas, such as NAFTA, sounds like politically expedient window dressing to help prop up poll numbers.

Trudeau made a big show of signing onto the Paris climate accord with its loose dates, vague emission targets and wonky subsidies to developing countries. Too bad doing the right thing at home for the environment when the stakes are crystal clear has proven to be mission impossible for him and his government.

Recent experience with leaky pipelines proves that an oil spill related to Trans Mountain, either by land or sea, is a certainty. The only question is when, how big will it be—and who will pay for the cost of cleanup? Other than the environment of Vancouver and the Lower Mainland.