A housing market that's too hot to handle 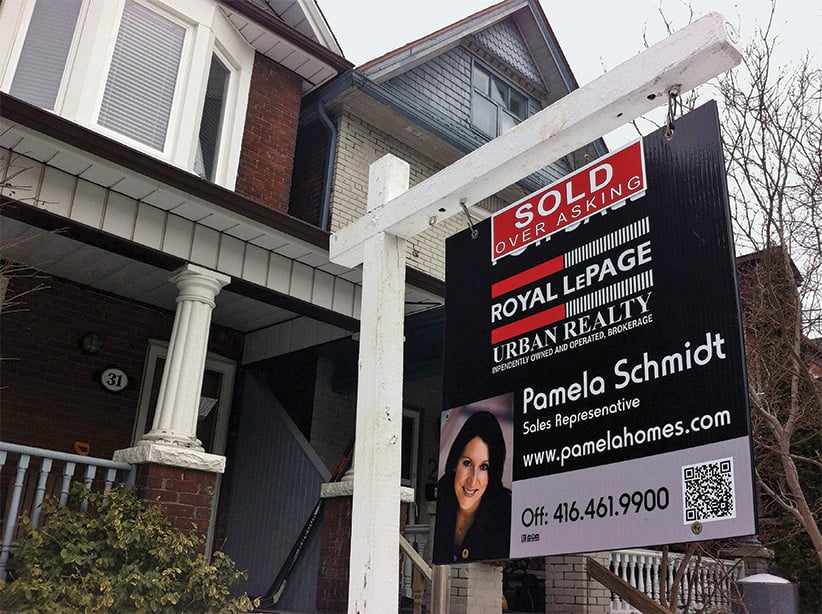 After years of pumping money into the country’s frothiest housing markets, Canada’s big banks are suddenly—and alarmingly—nervous about the debt-fuelled monster they’ve helped to create. In the span of a few days this week and last, several big-bank CEOs and chief economists let loose a flurry of warnings about surging home prices in Vancouver and Toronto, where it now costs an average of $1.5 million and $1.3 million, respectively, to buy a detached house. “We’re a little concerned about housing prices in the Greater Vancouver area and Toronto,” Brian Porter, CEO of Scotiabank, told Bloomberg TV shortly after the bank’s latest financial results were released. As a result, he added, Scotiabank “took our foot off the gas” when it came to selling new mortgages over the past six months. A few days later, Sherry Cooper, the chief economist at Dominion Lending Centres and the former chief economist at the Bank of Montreal, told Business News Network she was “very worried” about skyrocketing home prices in Vancouver and Toronto because “these things generally don’t end well.”

Such remarks are a marked departure from the finance industry’s earlier nothing-to-see-here attitude. Two years ago, when Greater Vancouver houses were selling for an average of just $1 million, Porter dismissed talk of a Canadian housing bubble by declaring that “ ‘bubble’ is perhaps the most overused word since the global financial crisis.” Cooper similarly argued in 2012 that Canada wasn’t suffering from a housing bubble, but rather a “balloon,” the implication apparently being that the latter is slightly more difficult to pop.

Related: It’s time for a ‘flipping tax’ on foreign investors

So why the sudden change of heart? It no doubt has much to do with Vancouver detached-house prices surging by 37 per cent in the year to this May, and Toronto’s soaring by a still ear-popping 15 per cent. Those sorts of gains are unsustainable and suggest investor euphoria—the always-dangerous “fear of missing out”—has firmly taken hold. Yet, while Scotiabank says it voluntarily curtailed its mortgage business, leading to flat growth in the most recent quarter, it’s unlikely to pull back on the reins too hard for fear of losing market share to competitors and leaving money on the table. “Scotiabank could decide tomorrow it’s not going to lend in the Vancouver market, but they don’t want to lose that volume of business,” says John Andrew, a professor of urban planning at Queen’s University. Far better, at least from the bank’s point of view, is to have the government step in and re-level the playing field for everyone—providing, of course, the changes don’t take too big a bite out of profits. To wit, Porter called on Ottawa to take additional steps to cool the market like raising down-payment minimums for borrowers who require insurance from the Canada Mortgage and Housing Corporation, or CMHC. There’s just one catch. “Federal policies apply to homebuyers right across Canada,” Andrew says. “But there’s no problem in most other cities. In fact, in a lot of markets, prices have been falling for the past year.” And the last thing Ottawa wants to do is engineer the very crash Bay Street is now desperate to avoid.

Of all the statistics that demonstrate how unglued Vancouver’s house prices have become from reality, the most telling is one concocted by Vancouver mathematician Jens von Bergmann. In a recent blog post, he noted the city’s workers, from baristas to doctors, collectively pulled down about $18 billion last year in income. By contrast, he estimates, owners of single-family homes collectively “earned” about $25 billion in 2015 simply by “twiddling their thumbs” and watching the value of their drywall soar.

Homeowners are hardly complaining about their growing wealth, of course. Scotiabank’s Porter, to take one example, recently listed his condo in Toronto’s tony Rosedale neighbourhood, complete with heated marble floors and a central spiral staircase, for just under $4 million, according to Toronto Life magazine. That’s apparently about $365,000 more than he paid for the three-storey space six months ago. Former finance minister Joe Oliver also seems ready to cash out of the Toronto market, putting his home of 30 years up for sale for $4.5 million in late May, according to the magazine.

The flip side of all those big property value gains is unaffordable housing and overly indebted families. A study last year by the C.D. Howe Institute suggested that one out of every 10 mortgage-indebted households in Canada was “extremely vulnerable” to an economic or financial shock—a figure that’s likely only increased since. At the same time, there are concerns a housing bubble could do immeasurable damage to the Canadian economy if it bursts, since homeowners who suddenly find themselves underwater on their mortgages would dial back spending elsewhere.

Exactly why home prices continue to rise in Vancouver and Toronto, while prices in other markets cool, remains the subject of debate. To be sure, both cities are popular places to live and work, suffer from an acute shortage of land for new housing and currently enjoy relatively strong local economies. Still, Sal Guatieri, a senior BMO economist, wrote last week that “in no way are family incomes growing fast enough to justify the rampant price moves,” nor can it be explained by a sudden spike in mortgage lending, which was given a boost by the Bank of Canada’s two rate cuts last year. The only other explanation, Guatieri says, is rampant speculation and foreign wealth—with the latter emanating mainly from China, where residents are estimated to have moved as much as $1 trillion out of the country last year.

It’s no surprise, then, that Scotiabank’s Porter told the Globe and Mail that a temporary luxury tax on foreign investors is one of three ways Ottawa could cool the market. But given no one really knows how big an impact foreign money is having on Canadian real estate prices, since no official data is collected, it’s not clear how Ottawa could be expected to craft such a levy.

There may be another reason why Scotiabank is in favour of taxing foreigners: there’s little risk to the bank’s earnings. “They’re not making much money on that stuff as a lender,” says Andrew. “In many cases, there’s no lender at all because it’s a cash deal, with someone spending $5 million or $6 million to purchase a home.” A spokesperson for Scotiabank said Porter was unavailable to comment.

Another mechanism floated by Porter, as well as National Bank CEO Louis Vachon, is a further hike to the minimum down payment required by buyers who need mortgage insurance. As of February, CMHC requires a 10 per cent down payment on the portion of the purchase price in excess of $500,000. Anything less only requires the old minimum down payment of five per cent. But going to 10 per cent across the board is unlikely to cool sales in Toronto and Vancouver, where many houses routinely sell for well above the CMHC’s $1-million maximum threshold. Worse, hiking down payments would be felt right across Canada, including in cities like Calgary and Edmonton, where prices are already falling. It would also have a disproportionate impact on first-time buyers and those with less money—the very people Ottawa is trying to help.

A better option is raising qualifying interest rates for five-year fixed mortgages. For example, a borrower who might normally be eligible to receive 2.4 per cent would be tested to see how their finances would fare with a 4.5 per cent rate, thereby removing the most financially stretched buyers from the picture. While this would also have a nationwide impact, Craig Alexander, the vice-president of economic analysis at C.D. Howe and a former Toronto Dominion Bank chief economist, argues the risk may well be worth it. “If you purchase a home but can’t make the payments if interest rates go up by two percentage points, you probably shouldn’t be buying that home in the first place,” he says.

So is there any way for Ottawa to cool sizzling housing markets like Toronto and Vancouver without putting others into the deep freeze? There may well be—and it’s already coming down the pipe. When Finance Minister Bill Morneau announced the latest changes to CMHC mortgage insurance last December, he also proposed forcing banks to hold more capital against mortgages in cities where property prices are high relative to borrowers’ incomes—like Toronto and Vancouver. The policy shift, the finer points of which are still being hammered out by Canada’s banking regulator, would effectively make it more expensive for banks to lend in higher-priced housing markets, prompting them to either pass along the extra costs to borrowers or issue fewer mortgages. Of all the options on the table, Alexander says changes to capital requirements would undoubtedly have the biggest impact on lenders, which may explain why few are publicly touting it as a way to dampen home sales. After all, if there’s one thing Bay Street fears more than a possible housing downturn, it’s the certainty of making less money.