A recession may not be imminent. But now, it can't be ruled out.

History tells us that federal elections during recessions are rare events. But Stephen Harper could be facing one this year. 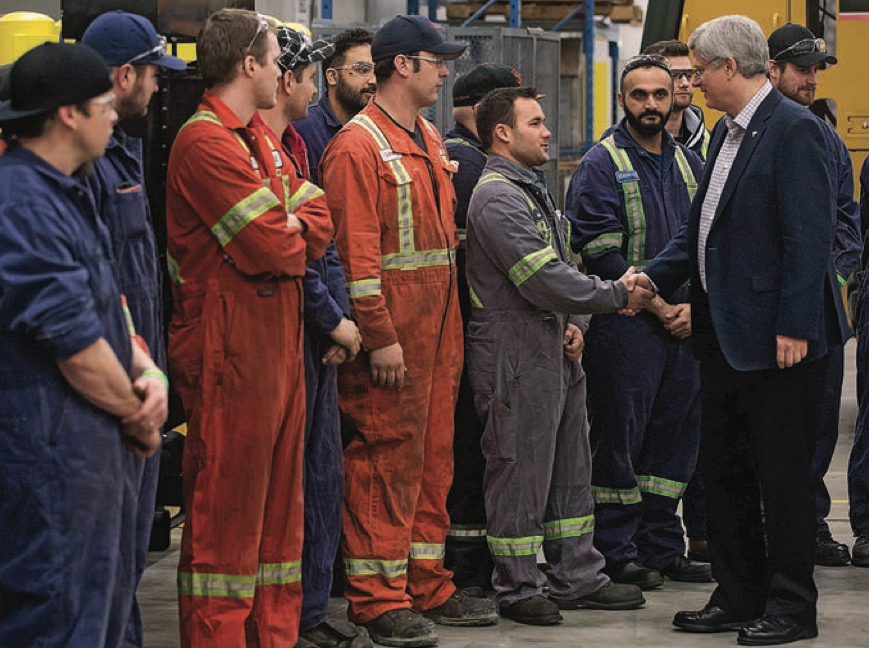 There’s a fine line between optimism and delusion: One will carry you through a rough patch, the other will blind you to the fact that the rough patch is actually a pit of quicksand about to swallow you whole. It’s something to keep in mind, as grim news about the state of Canada’s economy rolls in and talk inevitably turns to whether Canada is headed for another recession.

Things certainly don’t look good. The crash in oil prices is rippling across the western provinces, triggering layoffs in the oil patch and threatening to bring down Alberta’s housing market. Forecasts for Canada’s economic growth, already anemic, are being cut further. Consumers have retrenched, driving down retail sales, while the sagging loonie has failed to ignite Ontario’s manufacturing sector or lift non-energy exports. If anything, the weaker dollar has translated into higher prices for consumers, chomping through most of the stimulus benefits of cheaper gasoline. None of this means a recession is imminent, but it can no longer be ruled out, either. In other words, if not a recession, Canada is certainly headed for a near-cession.

Let’s get one thing out of the way first. A recession is going to happen eventually. They always have. They always will. Accept it. The question is when and, particularly, if you’re Prime Minister Stephen Harper, whether it will hold off until after the election in October. The potentially good news for the Prime Minister is that the professional forecasting crowd is overwhelmingly convinced we’re going to be just fine, thank you very much. The consensus among private sector economists is that Canada will suffer a slump as a result of the oil crash, but will continue to grow nonetheless. In a new report, TD Economics argued the “Canadian economy will weather the current oil-price storm,” while at the same time cutting its outlook for ﬁrst-quarter growth to 0.5 per cent from the one per cent it had forecasted in January. In fact, I can think of only one economist who has publicly entertained the thought of an outright recession. In a recent report, David Madani of Capital Economics, a forecaster who has consistently stuck with his call that Canada’s debt-inflated housing market is primed to crash, wrote that there’s a 30 per cent chance Canada could slip into recession (defined as two or more consecutive quarters in which real economic growth declines).

With so many optimistic forecasts lined up against that one tentative recession call, is there safety in numbers? Don’t bet on it. When it comes to predicting recessions, economists have an awful track record. Consider the lead-up to the Great Recession. When Canadians went to the polls in October 2008, that was actually the month growth peaked before the recession set in. Yet, for another two months afterward, there were reports from Canadian bank economists and the Conference Board of Canada assuring us the country might still avoid a downturn. It’s certain that forecasters will be offering comforting assurances well after the next recession has already begun, whenever that is.

There’s actually an argument to be made, based on nine decades of recession data, that we’re due for another downturn right about now. Since 1929, the average length of time between recessions (from trough to the next peak) has been six years and one month. Come this October, it will have been six years and five months since the Great Recession ended in May 2009.

But history also tells us that federal elections during recessions are rare events. Of the dozen recessions Canada has suffered through, voters have gone to the polls during just four of them, and two of those times were back-to-back recession elections in the 1950s. What lessons do those campaigns offer Harper and those who hope to unseat him? It’s a mixed bag. In two instances, the incumbents (Louis St. Laurent in 1953 and Harper in 2008) held on to power; the other two saw governments ousted from office (St. Laurent by John Diefenbaker in 1957 and Joe Clark by Pierre Trudeau in 1980).

Canada still has much going for it that could forestall a recession, namely, a Bank of Canada that’s shown it’s ready and willing to slash rates to promote growth, even if it means adding to the country’s household debt crisis in the short term. Perhaps Canadian homebuyers will rescue the economy again, as they did last time. And perhaps Ontario’s manufacturing sector will suddenly spring to life.

But again, there’s optimism and there’s delusion. If oil prices continue to drop—and that’s a very real possibility—and Canada’s job market and export sector fail to pick up, the odds of a recession election will grow. We shouldn’t try to kid ourselves about that.