Get ready for the flood

You can read warnings from the Bank of Canada, or simply look out a window of a Toronto office building and see that there are a ton of condominiums going up in Canada’s biggest city.

Some economists, like CIBC’s Benjamin Tal, aren’t too concerned about the prospect of overbuilding in Toronto resulting in a sharp decline in prices down the road. “A careful analysis of the magnitude of the projected supply/demand mismatch suggests a much gentler adjustment than feared by many,” he wrote in arecent report.

Other institutions, such as Goldman Sachs, have opined that Canada’s housing market could be in for a bust in the future due in large part to excess supply. “If the elevated level of homebuilding persists in coming years, the risk of overbuilding will increase substantially,” wrote Goldman Sachs economist Hui Shan. “And if the ongoing housing boom is followed by a housing bust, the price decline can be quite significant given the excess supply of housing at that point.”

Nationwide, the amount of multi-family homes under construction (adjusted for population) is well over 200 deviations above its historical average.

But just how many of those high rises are coming Toronto’s way?

According to Scotiabank’s economics department, which draws on data from market research firm Urbanation, that number is roughly 100,000: 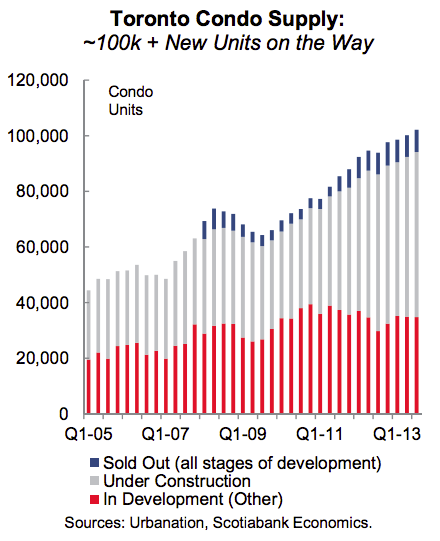 RELATED: REPORT: The Lack Of Affordable Housing In Toronto Forces People To Make This Choice

Scotiabank’s economists think the immense amount of condominiums in the pipeline will have developers thinking twice about launching new projects. “Housing face challenges due to a combination of overbuilding in recent quarters and general concerns in the industry that it’s important to see how supply-under-construction is absorbed before starting new projects,” write Derek Holt and Dov Zigler.

Now, this isn’t to say that a wave of 100,000 units will flood the market at once. For one, many of these units have been pre-sold. In addition, developers are wary of dumping a large supply on the market at once for fear of the deleterious effect that would have on prices.

But developers appear to have tipped their hands as to which direction they think prices are heading. A recent survey from Urbanation found that the most common best strategy for new Toronto condominium projects in 2014 is to “launch at below market prices.”

The growing consensus is that Canadian real estate has become overvalued, but that a rise in interest rates (not overbuilding) would be the proximate cause for any meaningful decline in prices.

And a correction in home values – not a crash – is something Canadians should be happy to see.