Fortress, the largest company in the syndicated mortgage industry, and the Financial Services Commission of Ontario are named in a proposed class-action suit. 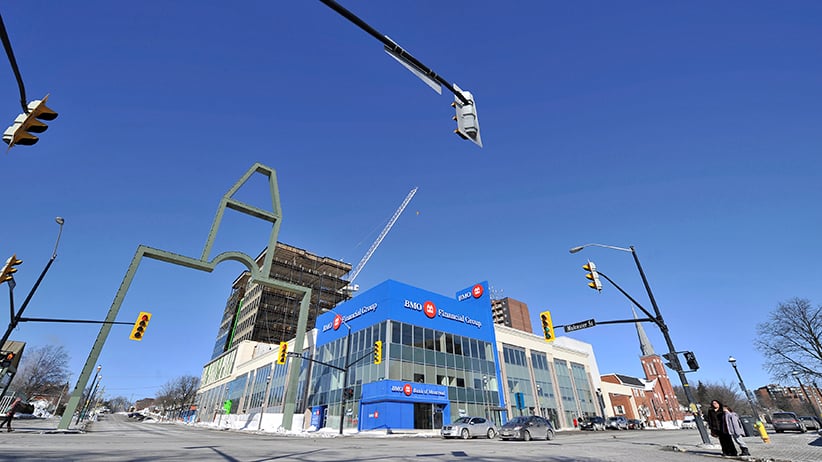 Investors have launched a proposed class action against a high-profile Toronto-area condo development firm, with projects across Canada, that raises millions from mom-and-pop investors through risky pooled mortgage products—many of which are advertised as safe and “secure.”

The suit, filed earlier this month in Ontario Superior Court, claims $27.5 million in damages, as well as the return of any profits, in relation to a troubled condo project in Barrie, Ont., which was marketed to investors by Fortress Real Developments, Fortress Real Capital and their various affiliates. It also accuses the Financial Services Commission of Ontario (FSCO) of failing to properly regulate the sector, dubbed by critics as a wild west of lending. “They were aware of the issues we’re complaining about in the suit for many years, but have done nothing to protect the public,” says Kevin Sherkin, the lawyer acting on behalf of two investors who hope to become representative plaintiffs if the suit is certified as a class action.

The allegations, which have yet to be proven in court, accuse Fortress and its principals—CEO Jawad Rathore and COO Vince Petrozza—of misleading investors by suggesting they were putting money into a relatively safe product, called a syndicated mortgage, that offered exposure to Canada’s booming condominium market and promised eight per cent annual returns, plus more if the projects performed well. The suit focuses on a condo project in Barrie called the Collier Centre that was forced into bankruptcy protection last year.

Fortress is also involved with several other condo and housing development projects across Canada, from Victoria to Winnipeg. It has forged a particularly close partnership with Toronto’s “condo king,” Brad Lamb.

Natasha Alibhai, a Fortress spokesperson, said in an email that Fortress is “puzzled” as to why it was named in the statement of claim. She says the company was retained by the Barrie project’s original developer, Charles Mady, as a real estate development consultant, but later took over the project, funded by both banks and syndicated mortgages, when Mady ran into financial trouble. “Fortress was not a developer of the project,” she says. A spokesperson for the FSCO, which oversees mortgage brokers in the province, said only that the suit contains “unproven allegations.”

The suit claims Fortress, along with a partner firm called Centro Mortgage, began raising money for the project in the summer of 2012, marketing it “widely to its network of referring mortgage brokers and agents as well as to members of the public.” One interested investor was Arlene McDowell, a 62-year-old IT worker. She invested $80,000 after meeting with a mortgage agent and expressing interest in the attractive eight per cent returns, according to the suit. The suit’s other plaintiff, a contractor who waterproofs basements, invested $15,000, as did his wife, after he attended a seminar where Rathore spoke, the suit claims.

Rathore and Petrozza founded Fortress in 2008, according to the suit, after previously working in the province’s securities market. In fact, the pair received a 15-year ban from the Ontario Securities Commission, or OSC, as part of a $3-million settlement agreement they signed in 2011. The agreement said the pair, along with another colleague, “engaged in conduct contrary to the public interest” when they sold shares of two companies later implicated in a B.C. stock scam to clients of their debt management business. However, the ban did not include “mortgage instruments,” which fall outside of the OSC’s jurisdiction.

Though sold like securities, syndicated mortgages are loans made by group of investors to a developer. They are typically used to fund the “soft costs” of condo projects—like building a sales centre or commissioning drawings. In exchange, investors are promised regular interest payments on their loan—generally around eight per cent annually—and may be entitled to receive more once the project is completed. In addition, the loans are secured against the property in the form of a mortgage, which is why the marketing for many syndicated mortgage products often touts them as safe or “secure.” (For more on the industry and Fortress, read Maclean’s story from last April here).

In reality, however, such investments are quite risky. The loans made by syndicated mortgage investors are usually subordinate to a project’s main bank lenders, making the chance of getting one’s money back if something goes wrong—and there’s plenty that can go wrong in a large, complex commercial development—highly unlikely. Hence the attractive eight per cent interest rates offered.

But the suit doesn’t just allege that Fortress and its partners, including a network of brokers, misrepresented the risks. It claims investors were also kept in the dark about how, exactly, the nearly $17 million raised for the Collier Centre was being used and how much Fortress was keeping for itself. The suit says Fortress’s agreements with developers call for “advance payments to Fortress of ‘anticipated profits’ at the time financing is raised. This results in a substantial portion of an investor’s money (approximately 35 per cent) being retained by Fortress as anticipated profits (before any profits are actually earned),” according to the suit. Some of that money, the suit says, was used to pay broker and agent commissions, which ran as high as 15 per cent. Similarly, the suit alleges additional funds are held back by Fortress so it could be used to pay investors interest on their loans. “They took an interest reserve, so they were basically paying them back with their own money,” says Sherkin, the lawyer.

In the end, the suit alleges, less than 50 per cent of the funds raised from investors actually went toward the development. Asks Sherkin: “If you were getting a mortgage with a bunch of people and half that money wasn’t going to the project, but to the people who were pitching you, would you invest?”

The suit also takes issue with the free, independent legal advice that Fortress offered to investors in the Collier Centre, claiming the lawyer in question, Derek Sorrenti, had a conflict of interest since he also acted as a trustee for the syndicate in the project’s loan agreement. Sorrenti did not respond to an email seeking comment.

Similarly, the suit alleges Fortress misled investors by artificially inflating the value of the land that their loans were registered against. Rather than using an appraisal, the suit claims, Fortress relied on an opinion of market value that suggested the land was worth nearly $22 million—a figure that assumes the project, which included condos and commercial space, would be fully sold and completed. “The opinion did not disclose that Mady-Collier had purchased the land for $4 million from the City of Barrie approximately two to three weeks earlier,” the lawyers claim. The valuation question was highlighted when the developer, Mady, filed for protection under the Companies’ Creditors Arrangement Act, or CCAA, in early 2015, owing about $30 million to Laurentian Bank, the primary lender, and nearly $17 million to the Fortress investors.

Yet another potential consequence raised by the suit: excessive loan-to-value ratios aren’t eligible to be held in RRSP accounts, which is where many syndicated mortgage investments often end up.

The suit also names the province’s regulator, FSCO, as a defendant. It claims FSCO failed to act “meaningfully” in response to complaints and in compliance with its statutory duty to oversee mortgage investments in Ontario. Separate from the suit, an expert panel struck by the provincial government to review the regulator’s mandate recently raised questions about FSCO’s oversight of the syndicated mortgage industry, which is worth roughly $4 billion in Ontario. In its final report, released in June, the panel said it was “concerned with what appears to be a regulatory gap regarding syndicated mortgages.” Because of their complexity, it recommended they be overseen by the province’s securities regulator to ensure “a consistent application of disclosure requirements across products and investments seen by investors as comparable.” Investor rights activists have also called for the OSC assume oversight of syndicated mortgages in the province.

The lawyers for the two Collier Centre investors involved in the proposed class action argue their plaintiffs effectively lost their money when a Fortress affiliate purchased the assets of Collier Centre project through the CCAA process last November, extinguishing the rights of the syndicated mortgage investors in the process.

Fortress, however, claims it acted as a saviour by bailing out the troubled project, noting that it’s invested an additional $5 million. “Fortress is now working to complete the Collier Centre project, and in fact, will only realize a profit on the project should the sale price exceed the amount of outstanding principal and arrears interest owed under the mortgage given to the original Collier Centre syndicated mortgage lenders,” Alibhai wrote in an email. “Based on current projections, Fortress Collier anticipates there will be sufficient value in the projects to repay the original project’s lenders, including the Mady Collier syndicated mortgage lenders.”

The two investors, however, call Fortress’s promises “empty” and “crafted for public relations purposes,” according to the suit, because “the obligation is worded in such a manner that it is highly unlikely there will ever be any ‘available cash flow’ once the Collier Centre is completed.”