Are Canadians being left behind or benefiting from a thriving economy?

For this election, it’s both. There is evidence that people's partisan identification changes the way they see changing economic conditions. 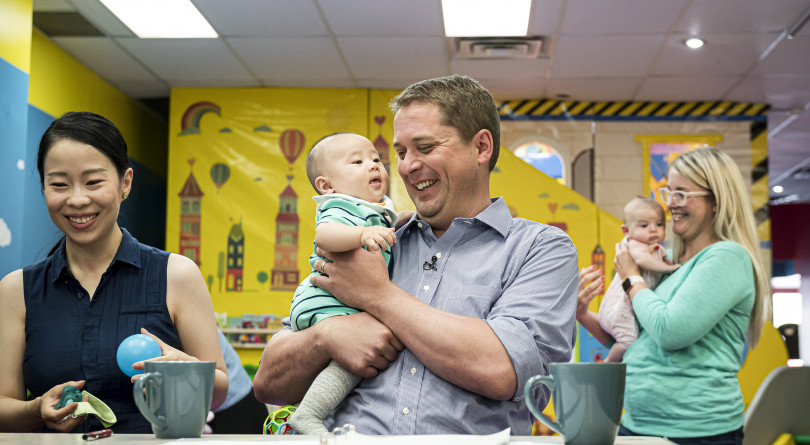 If you wanted to put current economic conditions into weather terms, picture sunny skies and balmy breezes as the federal election campaign is poised to kick off, with a slight smudge of ominous grey cloud along the far horizon.

The latest Canadian unemployment numbers show a slight uptick, but at 5.7 per cent, the rate is still plenty amiable. Wages and GDP are up, and retail spending is fairly steady. The potentially darkening skies, though, come courtesy of slowing growth rates and tumbling consumer confidence in the behemoth U.S. economy, thanks in large part to President Donald Trump’s trade war with China. And recent polls have repeatedly pointed to the economy—or, more specifically, the cost of living—as the top concern of Canadian voters, and that seems to be the prime rhetorical ground upon which the Oct. 21 election will be fought.

READ: 2019 federal election platform guide: Where the parties stand on everything

But there is a central conundrum here, says Shachi Kurl, executive director of the Angus Reid Institute: Canadian economic indicators are strong, but many people still feel that they can’t get ahead or are being left behind. The election is shaping up largely as a battle between the Liberals and Conservatives, and Justin Trudeau’s incumbent party has a tricky needle to thread in their campaign messaging. “It is . . . We’re doing well, but we also recognize that a lot of people are not doing well, and we are going to continue with policies that make life more affordable, that make life easier, that take the stress out of worrying about where your own personal account balance is,” Kurl says. The Liberals will point to initiatives such as the Canada Child Benefit and play up a strong economic record, she adds—though it’s debatable how much credit governments get for economic growth.

“For Andrew Scheer, it is a similar message,” she says. “But,” she adds, he’ll also say that “Justin Trudeau hasn’t done enough, you’re being left behind, and we, the Conservatives, through our tax cuts and other reforms, are going to be the ones who put the money back in your pocket and make you feel like you’ve got a little more flexibility and a little, but less, worry.”

When the markets wobble, the public inevitably speculates about what’s coming, says Derek Burleton, deputy chief economist for TD Bank Group. You don’t have to be an obsessive market watcher to get nervous about the news or chatter amongst people you know. And there can be a streak of self-fulfilling prophecy, he adds: when talk of a possible R-word starts, people start thinking that they should adopt a defensive financial crouch. If everyone suddenly starts battening down the hatches, the economy could slow, in part simply because of the suggestion that some cosmic foot is about to slam the brakes.

READ: Election 2019 primer: What you need to know about jobs, the economy and the deficit

In a report at the end of last year, Beata Caranci, chief economist for the TD Bank Group, dubbed this behaviour the Beetlejuice Syndrome: “Just like the movie, saying a word too many times makes it appear,” she wrote.

Still, it takes a while before individual consumers and families start to feel at risk and really tighten their purse strings. When an economic downturn gets kitchen-table personal, it affects a political campaign, says Kurl. Politicians follow the mood of the electorate rather than lead it, and they have their reasons for wanting to emphasize smooth sailing as long as possible, she says. “I think we know, based on history, that until the gremlin is at the door, politicians are generally quite loath to talk openly about the what-ifs,” says Kurl. “They tend to want to proffer a more soothing or reassuring tone: we’re watching it, we’re taking it seriously, we’re keeping an eye on it, but the fundamentals are strong.”

Political science has spent decades studying the relationship between economic conditions and vote choice—what is loosely called “economic voting”—says John McAndrews, a researcher in political science at the University of Toronto. There is a pattern: in a strong economy, the incumbent party fares well, and in rough seas, it suffers. “The conditions here are fairly ripe for it to have an effect . . . we have an incumbent Prime Minister who’s been in the job for four years at the head of a majority government,” he says. However, as with seemingly everything at the moment, tribal identity matters. There is evidence that people’s partisan identification creates a “perceptual screen” through which they see changing economic conditions, McAndrews says. “So if you were to tell someone the economy was getting worse or getting better, they would interpret that in terms of whether or not it favours their own party identification,” he says.

So when they consider the economy, Liberals and Conservatives can peer out the same window and see different weather coming over the horizon.

This article appears in print in the October 2019 issue of Maclean’s magazine with the headline, “A mix of sun and recession.” Subscribe to the monthly print magazine here.