As Future Shop vanishes from the retail landscape, the decision by its founder to sell the chain to Best Buy in 2001 looks smarter than ever

If timing is key to business success, Hassan Khosrowshahi’s has been nothing short of impeccable. The Iranian-Canadian businessman opened the first Future Shop store in Vancouver back in 1982—just as a tsunami in consumer electronics was rolling onto shore. Personal computers. Digital cameras. Video game consoles. Flat panel TVs. Future Shop cashed in on trend after trend, fuelling a rapid expansion that eventually made it Canada’s largest electronics chain.

For his second act, Khosrowshahi agreed to sell Future Shop to American giant Best Buy for $580 million in 2001—a cash-only deal. At the time, the move looked defensive, given Best Buy’s intentions to sweep into the Canadian market. Now it seems positively prescient. Best Buy, which has struggled mightily in recent years, revealed Saturday that it was consolidating its Canadian operations by closing 66 Future Shop locations and transforming another 65 into Best Buy stores—the latest in a series of store closures and layoffs. Another 1,500 employees are expected to lose their jobs. 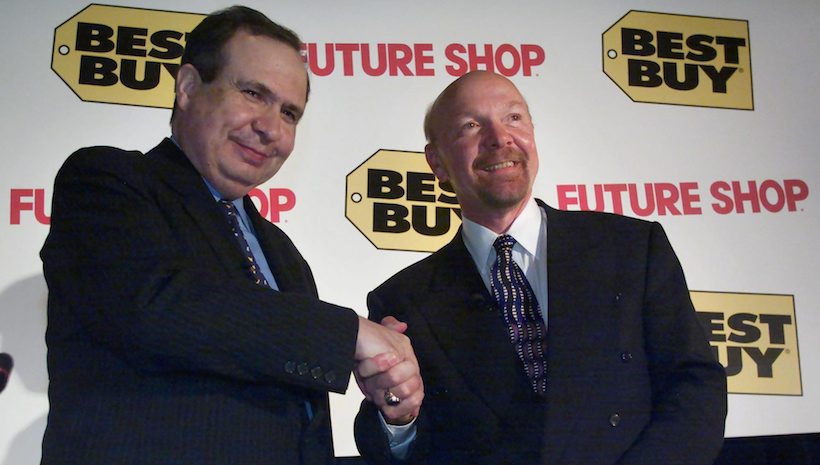 Great timing: Hassan Khosrowshahi (left) the founder of Future Shop, in 2001 at a press conference to announce the chain’s sale to Best Buy

Best Buy said in a statement it will have a total of 192 locations across Canada, including 56 Best Buy Mobile stores, when the restructuring is completed at a cost of up to $350 million. “We will continue to have a strong store presence in all major markets in Canada,” said Ron Wilson, the president and chief operating officer of Best Buy Canada, in a statement.

Best Buy and its Future Shop subsidiary were caught by a tectonic shift in the consumer electronics market that few saw coming. Though Canadians are still crazy for their devices, consumers increasingly buy them online from companies like Amazon or directly from manufacturers like Apple, which recently became the world’s most valuable company with a US$717-billion market valuation. The trend contributed to the 2009 bankruptcy of Circuit City, one of Best Buy’s biggest U.S. competitors.

Faced with an increasingly competitive market, Best Buy has been busy trying to shrink itself back into the game. Over the past few years, it’s closed 15 locations in Canada and axed at least 2,000 jobs. The parent company, meanwhile, recently posted 2.8 per cent growth in U.S. same-store sales during its holiday quarter, marking the second quarter of increases after three straight quarters of declines. Earnings, meanwhile, came in at US$519 million, up from US$293 million a year earlier. Nevertheless, CEO Hubert Joly said he planned to cut another US$400 million in costs over the next three years.

As for Khosrowshahi, who fled Iran in the late 1970s following the nationalization of his family’s industrial conglomerate, he continues to chair his family’s Vancouver-based holding company, Persis Holdings. It boasts investments in land development projects and pharmaceutical royalties, among other things. Khosrowshahi, who is often described as “reclusive,” did not immediately respond to a request seeking comment.

Best Buy’s decision to downsize its position in Canada comes on the heels of several other high-profile retail flame-outs. Back in January, Target announced that it was mothballing all 133 of its Canadian stores and firing 17,600 workers just two years after it entered the country. Other retailers who have announced Canadian store closures or ceased business altogether in recent years  include Sony, Sears, Smart Set, Jacob and Mexx.