Budget 2021: Can the government convert all that shiny new spending into results?

Helaina Gaspard: A budget is more than spending, surpluses and deficits. It is a government’s vision of the role of the state. 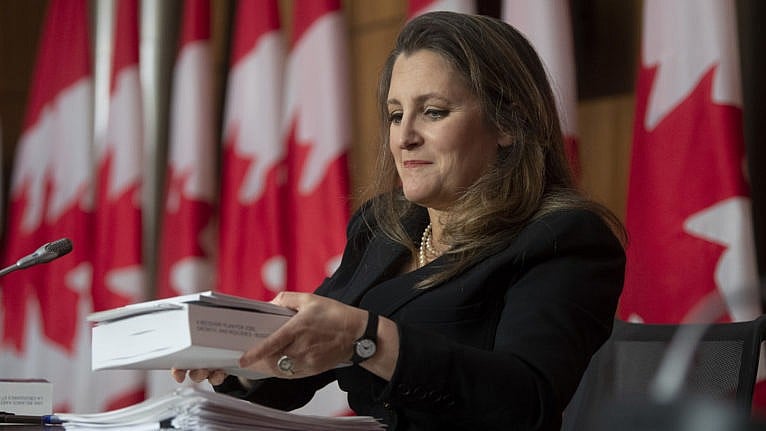 Minister of Finance Chrystia Freeland holds a copy of the budget at a news conference in Ottawa on Monday. (Adrian Wyld/CP)

Helaina Gaspard is director, governance and institutions, of the Institute of Fiscal Studies and Democracy at the University of Ottawa

My grandmother would often remind us of an Arabic saying that loosely translates to “all new things shine with appeal.” That’s what makes budgets exciting. The 700-plus page 2021 federal budget has something shiny for everyone, with spending that runs the gamut from a national child-care strategy, to science and innovation, to festivals, to an increase to Old Age Security—the list goes on.

Big announcements and policy changes may be appealing, but a budget is more than spending, surpluses and deficits. It is a government’s vision of the role of the state.

Through some combination of ideology and context, this government is proposing roughly $135 billion in new federal spending over the next five years (when 2020-21 spending is included, the figure grows to $143 billion).  This new outlay is on top of the existing annual spending base (as a point of reference, the base was approximately $340 billion in 2019-20) and the $345 billion in COVID-response focused expenditures.  The 2020-21 deficit is $354 billion, with a debt-to-GDP ratio of 49 per cent. This spending increase is justified by the government through low interest rates.

Governments running deficits in election years have been found to be just as likely to be returned to power as those running surpluses. But while eye-popping spending numbers draw attention, governments succeed or fail on how effectively they put that money into action—that is, how they manage the expensive programs and operationalize their ideas.

To assess the government’s budget plan and unpack its vision of the state, I’ve slightly modified the three-part expenditure framework devised by Allen Schick of the Brookings Institution, a world authority on budgeting and fiscal theory.

Are your economic and fiscal assumptions reasonable? Are the proposed revenue and spending plans sustainable, even if circumstances change?

Budget 2021 assessment: The economic assumptions presented in the budget are optimistic, leaving little room for changes in context. It was positive to see scenario modelling in the annexes demonstrating impacts of a slower recovery, versus a faster one, versus the assumptions for Budget 2021. There are however, no fiscal guardrails in place, and no fiscal anchor beyond a declining debt-to-GDP ratio. With reliance on optimistic revenue and economic projections, a path to rebalancing spending for long-term sustainability is necessary.

Do your spending decisions reflect your political commitments?

Budget 2021 assessment: This budget is part ongoing crisis-response to the pandemic, and part focus on people through economic participation and equity. As an election budget, there’s a little something for everyone.

The government has signalled its commitments to women, families and children through the National Early Learning and Child Care Plan; to the environment through several initiatives; and to addressing inequities for marginalized groups through initiatives in housing, Indigenous affairs, among other things. New revenue measures focus on luxury items and the Digital Services Tax.  The government’s approach is consistent with areas of focus from its last Speech from the Throne.

Tucked in the annex are 170 pages of alignment of proposed budgetary measures to the Quality of Life Framework for Canada.  This framework is consistent with the government’s past commitment to budget for well-being (as is the practice in New Zealand and Scotland). The government does demonstrate how its proposals fit with its vision of well-being for Canadians.  But there are gaps to close on defining a clear goal for the proposals, providing indicators for measurement and offering clarity on oversight to ensure goals are being achieved.

The government’s vision is not a remaking of the state.  There is the potential for transforming childcare with the national strategy, although this will depend on federal-provincial cooperation. Many of the other initiatives are relevant, but will not transform an economy or a country overnight.

How will you know your plan worked? How will you measure results?  How will value for money for taxpayers be ensured?

Budget 2021 assessment: Delivering results for public expenditure is arguably the biggest challenge for a government. It is fun to cut ribbons and spend money, but the real work comes in demonstrating outcomes and value for taxpayer dollars. That’s why implementation matters.

We know programs, like institutions, have a tendency to persist on their course once launched. Implementation with consideration of the program or policy goal, resources and evaluation metrics must be defined and established appropriately at the front-end.  Cement dries quickly; once in place, change is difficult.

Consider for instance, the additional $1 billion in funding over six-years allocated to the Universal Broadband Fund. Connectivity is crucial, and building broadband infrastructure is costly. But has the existing base of the program been considered? Is the $8 billion already allocated to broadband insufficient, or is there difficulty getting the money out the door?  Is adding more money to the same delivery mechanism a solution?

Similarly, while the budget acknowledges that work on reforming First Nations child and family services is ongoing, there is an increase in funding to the existing program ($1 billion over five years, with approximately $119 million ongoing).  Without changing the underlying funding structure, outcomes for children will not change.  Throwing more money at the system will not alone change results.

The billions of additional science and innovation spending is exciting. But the impacts of such spending are unclear, especially when added to the billions already being spent. Prior to the 2017 budget, an assessment of skills and innovation spending demonstrated that billions of it was unaccompanied by clear performance metrics. Before new money is spent, the existing base should be reviewed to ensure taxpayers are getting value.

The government has defined its vision of the state through broad spending, some of it, ongoing. The fiscal allocations and policy proposals have been made. Assuming parliamentary approval of the budget, the focus of the government must shift to implementation. Linking resources to outputs and outcomes is necessary to demonstrate competency and capacity to spend big.

There is a window of opportunity to take the excitement of new promises and spending and make them work for Canadians. All new things may shine with appeal, but we must take care to ensure they’re worth the money.