Prepare for long grind (but not a fire sale), says Stephen Gordon

Data from the housing market out today shows that sales were down 15.3 per cent in March compared to the same period last year. Given the events of the past decade, it is natural to worry about the possibility that Canada is headed for a U.S.-style housing meltdown. But I don’t see how that’s likely to happen. It’s far more probable that we’ll see the kind of housing slump we usually see in Canada: a long grind.

The reasons for thinking so are two-fold. The first is that Canadian mortgage underwriting standards are more conservative than they were in the U.S. Practices such as “liar loans” (where borrowers didn’t have to provide proof that they earned as much as they said they did), no-money-down mortgages or negative amortization (where payments didn’t even cover the interest on the loan) never crossed the border into Canada. To be sure, we weren’t entirely immune from the trend towards looser mortgage loan standards — the introduction of longer amortization periods of 30, 35 and even 40 years may have been followed by other “innovations” if the U.S. housing market hadn’t melted down when it did.

The other, related point is that Canadians simply don’t default on their mortgages the way Americans do. This chart graphs the percentage of mortgages in arrears by 90 days or more (Alberta is broken out for reasons that will become obvious in a minute):

There are several plausible stories that can help explain why this is. One might be the fact that high-risk applicants don’t get mortgages in Canada, so the ones who do are generally able to make their payments. Also, most Canadian mortgages are recourse loans, so people who default will find that their creditors are able to go after other assets and their wages. (This isn’t the case in Alberta. The spike in the early 1980s might have been associated with the arrival of the legislation making Alberta mortgages non-recourse, so there was a certain pent-up supply. See here for more on this episode.) Yet another possible explanation would note that Northern peoples place a special priority on making sure that they have shelter from winter.

Of particular interest is the case of the early 1980s, which saw the most severe Canadian recession since the 1930s and a spike in mortgage interest rates so sharp that people who renewed their mortgages during this time saw their payments increase by up to 60 per cent. Even in the face of all that, more than 99 per cent of homeowners outside Alberta did whatever they had to do to meet their obligations.

Now look at this chart from the New York Fed (hat-tip to Calculated Risk for this one): 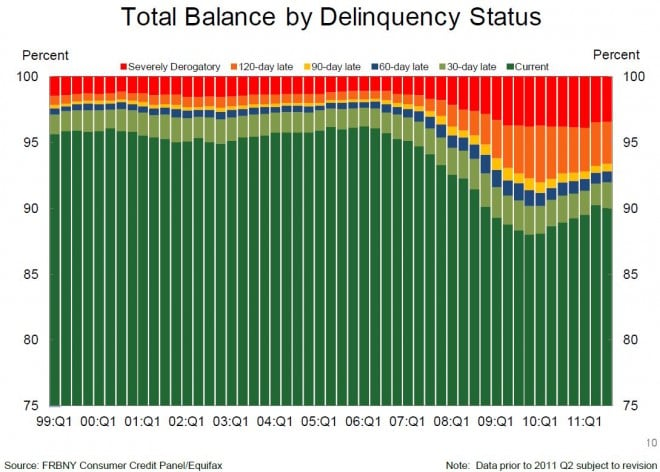 U.S. mortgage delinquency rates started increasing when housing prices began to fall, two years before the recession. For many U.S. homeowners with non-recourse mortgages, there was simply no point in continuing to pay off a mortgage that was worth more than the house. This set off a vicious circle in which “underwater” homeowners dumped their houses on the market, which subsequently depressed housing prices even further, dragging even more households underwater and leading to even more defaults.

This chain of events seems unlikely to occur here: Canadian policymakers have spent the last five years scrambling to tighten mortgage rules. The key ingredients of a U.S.-style “fire sale” are missing. The most vulnerable people among Canadian homebuyers are investors who bought condos in anticipation of a sustained demand — students in Toronto, Vancouver and Montreal will be happy to learn that these investors will soon be looking for tenants as a way of generating revenue until they can find buyers.

All of this isn’t to say a housing slowdown will be pleasant, as anyone who remembers the previous busts can attest. In the current cycle, the housing market stopped being a driver of economic growth at least a year ago, and will likely become a drag on growth as activity in the construction and associated finance and real estate sectors slows. Stagnant house prices imply slower growth in household wealth, which in turn affects consumer spending.

Other factors can and may offset the real estate market slowdown. But even if they don’t, we’re not going to see a U.S.-style housing meltdown. It’ll look like a standard-issue Canadian housing slump.