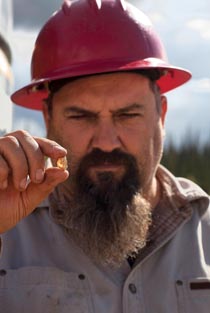 Reality television’s latest obsession is gold. Jungle Gold, Gold Rush, Bering Sea Gold and Gold Fever are all shows documenting miners’ efforts to dig up flakes of the precious metal worth $1,700 an ounce. The last time TV was so caught up in a trend it was in the house-flipping genre (Flip This House, Flip That House), which seemed to hit its peak just before the U.S. housing market crashed. Is there a similar warning sign in the TV gold boom? Does all the mainstream fascination with gold suggest an overinflated interest and price?

Some analysts on Wall Street, at least, seem to think gold’s wild ride may be nearing its end. This week, Morgan Stanley lowered its gold-price forecast for the year by four per cent, to $1,773. Late last year, Goldman Sachs cut its target price for 2013 to $1,800 an ounce from $1,940, citing an improving U.S. economy. “The risk-reward of holding a long gold position is diminishing,” it said.

Gold is the ultimate safe-haven investment and has enjoyed an incredible rise in recent years. A decade ago, gold was worth little more than $300 an ounce. Since 2000, it has gone up every year for 12 years (a record) and in each of the three years after the 2008 crash, gold prices peaked to hit record highs. That gold might be finally losing some of its shine suggests fear of riskier investments may be ebbing. The S&P 500 index last week, for instance, cracked the 1,500 mark for the first time since 2007.

Not everyone is convinced the gold rush is finished just yet. Morgan Stanley said that despite its price cut, it still remains “bullish on the gold-price outlook,” citing an ongoing commitment in the U.S. to low interest rates and government stimulus spending in the face of “a below-par recovery.” Many central banks are also still buying gold. As Goldman admits, “calling the peak in gold prices is a difficult exercise.”

Gold prices should eventually ease as the global economy recovers. But if you’re a Gold Rush fan, you may not want to change the channel just yet.