After the oil boom

As hiring slows and work goes high-tech, Canada can’t count on the oil sands to be its jobs machine anymore 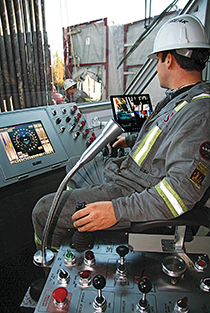 In his 25 years in the oil industry, Preston Reum has seen his share of booms and busts. Back in 1989, when Alberta’s oil industry was in the midst of a downturn and unemployment in cities like Edmonton topped 10 per cent, Reum collected T4 slips from 11 different employers as he jumped from one job to the next in search of a steady paycheque.

“You’d have a friend and whoever got a job, we went and worked on that rig and when that job was done, you’d know another guy running a rig and you’d go there,” says Reum, now a general manager at service-rig contractor Essential Energy Services. “You just stuck with it and worked for anybody that had a job.”

With each boom-bust cycle in Alberta, Reum has lost friends and employees, tired of the long, cold days in remote work camps, weeks of unpaid downtime and the uncertainty of living paycheque to paycheque. When the industry took a hit in 2008 and 2009 in the midst of the global recession, Reum says workers left in droves for jobs in the construction industry or mining in Saskatchewan, while others took up plumbing apprenticeships in the cities. Many experienced workers who had flown in from Atlantic Canada went home and never returned. Reum says the jobs that skilled workers found after leaving the industry often came close to matching the salaries in the oil sands, while also offering regular pay and nine-to-five days at job sites much closer to home.

Since 2010, Alberta’s oil and gas industry has once again been a major driver of jobs, helping power Canada’s economy through a global recession. By 2011, more than 186,000 Canadians worked in the oil and gas industry, with employment growing an average of seven per cent a year over the previous decade. But after a decade of mostly boom years, the industry is facing another slowdown, dragged down by discounted Canadian oil prices, weakening demand for commodities and regulatory hurdles facing export pipelines like TransCanada’s Keystone XL and Enbridge’s Northern Gateway. In August, CIBC World Markets predicted the U.S. would produce an additional 700,000 barrels a day over the next decade, hampering expansion plans in Canada’s comparatively high-cost oil sands. It warned the slowdown could cost as much as $20 billion in revenues because of lower prices and production slowdowns here.

Alberta’s government was forced to cut its forecasts for oil and gas royalties in half this year. Canadian oil companies, meanwhile, are shifting their focus toward controlling costs after years of explosive growth in hiring and investment. The Petroleum Human Resource Council expects to fill 9,500 jobs between 2012-2015, compared to the more than 13,000 jobs filled between 2010 and 2011 alone. Hiring is expected to drop from an estimated 3,000 a year in 2012 to below 1,700 by 2017.

That’s hardly the kind of growth the country can lean on to drive the economy. It also means the days when Canadians from across the country converge on northern Alberta to find well-paying jobs, with little experience or education, are coming to an end. The slowdown, meanwhile, is only exacerbating the ongoing shortage of highly skilled workers as oil sands companies once again face the prospect of an exodus of experienced employees leaving in search of more stable careers.

But even as they head into yet another downturn, industry players say the employment landscape is changing. Technology and alternate ways of extracting oil and gas are promising to transform the oil sector into a much leaner operation, a necessity for an industry now desperate to rein in costs. The working season will be longer, but the jobs more stable. The booms and busts will be less intense. Companies will need far fewer workers overall, but those they hire will need more specialized skills. Many of the jobs that are easily transferable to other industries will be eliminated, replaced by openings for workers with expertise unique to the oil and gas industry.

“The jobs where you can expect to move up the career ladder with Grade 10 starting off as a labourer are disappearing because of technology,” says Cheryl Knight, executive director of the Petroleum Human Resources Council of Canada. “You need to have really good essential skills: reading, math and science. You have to be able to shift to different operations and different types of jobs as the industry changes.”

A good example of the workplace transformation is the way in which the shift from open pit to in-situ oil mining is changing the types of skills that will be needed. Although roughly 80 per cent of Alberta’s oil reserves are in-situ (buried deep in the ground and extracted using steam to heat the bitumen and bring it to the surface), more than half the jobs in oil and gas extraction today are still in traditional open-pit surface mining. That’s expected to change by 2015. The shift will mean fewer jobs for heavy equipment operators and even entry-level engineers, and more demand for workers such as specialized petroleum engineers and steam-ticket operators, who are trained in working with large high-pressure boilers.

In-situ operations also tend to be smaller scale than conventional mining, meaning they need fewer workers. New projects will include fewer upgraders and refineries as companies prefer to ship unprocessed bitumen. The human resource council expects more than 8,500 new jobs at in-situ extraction operations by 2021, compared to less than 1,000 at upgraders.

Knight says most companies building in-situ operations are expecting to run a plant for 30 years. Most of the investment and hiring is done before the operation is up and running, which she says makes the new operations more immune to swings in oil prices. “What’s vulnerable to cycles is future development, not operations,” she says. “Once you build a plant you’re going to produce as much as you can. You’re not going to shut down the plant and walk away. With a drilling rig, you can stop drilling and move to the States.”

Exploratory drilling will continue to be closely tied to oil prices. But the shift from rigs that drill one well at a time, to drill pads that can accommodate as many as 10 wells is helping to make the industry more stable. Since newer drilling operations can create more wells on a smaller footprint, companies are more willing to invest in building infrastructure to extend the working season. The wells themselves are also more complicated to drill, which makes for longer work contracts. 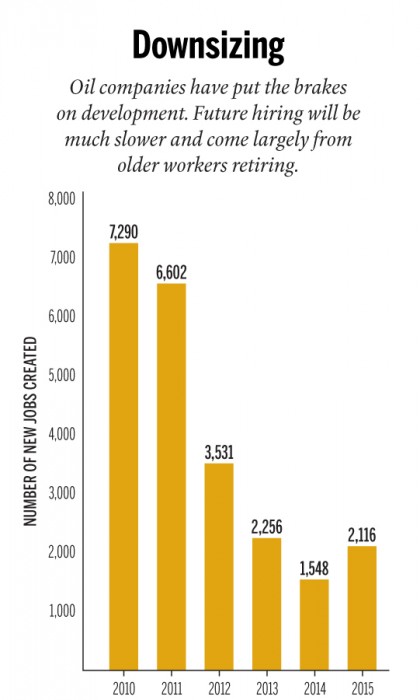 At the same time, newer rigs equipped with sophisticated computerized equipment are automating jobs previously done by floorhands, an entry-level manual labour position. “I think it’s actually going to possibly make the drilling rigs and service rigs more attractive to some Gen Ys,” says Mark Scholz, head of the Canadian Association of Oilwell Drilling Contractors. “I call them the Xbox generation. It’s quite fascinating to see the level of computer technology that’s going to be incorporated into some of these rigs. In a lot of cases it’s almost like a computer game with a joystick controlling the overall operation.”

Such changes will ultimately mean fewer jobs, but the promise of more career stability and a more consistent schedule. They also mean the oil sands will likely play less of a role in the economy as Canada’s job-creation machine. “Overall, our industry is hiring even though you can’t say in all sectors that we’re growing,” says Knight. “The industry doesn’t have to be growing to provide stable career opportunities and employment.” That’s good news for the next generation of highly skilled workers searching for lifestyle and a long-term career instead of living paycheque to paycheque, but bad news for anyone who thinks that simply moving to northern Alberta will mean a guaranteed path to easy money.