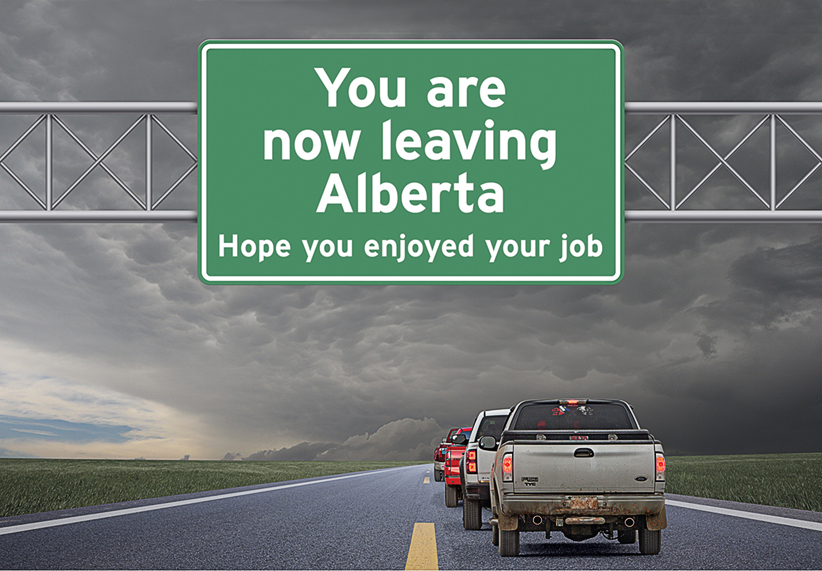 The rate in Quebec held firm in February at 7.6 per cent for the second straight month.

The provincial data was released with Statistics Canada’s latest labour force survey, which found the national unemployment rate crept up to 7.3 per cent last month for the first time in three years.

The Canada-wide jobless rate increased by 0.1 per cent for the third month in a row, said the report, which also noted that overall job growth remained flat.

A closer look at the numbers reveals shifting prospects across the country.

Since it started collecting the data in 1976, the federal statistical agency said the only time Alberta’s unemployment rate was higher than Quebec’s was during a four-month stretch between October 1986 and January 1987.

Alberta’s February jobless rate also rose to its highest level since it reached 8.2 per cent in August 1995.

“No prizes for guessing which province saw one of the biggest rises in unemployment last month,” Porter wrote in a research note to clients.

Alberta has shed tens of thousands of jobs over the past year in sectors such as resources, agriculture and manufacturing. Last month, however, employment was largely unchanged.

A consensus of economists had been predicting the country to add 9,000 net jobs and for the unemployment rate to stay at 7.2 per cent, according to Thomson Reuters.

The number of net full-time positions fell by 51,800, while less-desirable part-time jobs increased by 49,500.

By sector, the agency said the net number of jobs in natural resources fell by 8,900 last month compared to January.

“While not a big break from the underlying sluggish story over the past year, this drab report pounds home the point that the underlying economy remains soft and that job growth just can’t keep up with population gains at this stage of the cycle.”

By region, Statistics Canada found that Saskatchewan was among the hardest hit provinces last month, losing 7,800 jobs compared to January and seeing its unemployment rate climb 0.3 percentage points to 5.9 per cent.

British Columbia was the only province to see significant job increases in February, when it added 14,100 net new positions.

The data also showed that self-employed positions across Canada increased by 3,000 last month, while the net number of employee jobs fell by 5,300.

The number of private-sector jobs rose by 15,200, while public-sector positions declined by 20,400.

The country’s youth unemployment rate climbed to 13.3 per cent last month, from 13.0 per cent in January.

Experts noted how the country’s labour-market numbers for February rang in below expectations after an unexpectedly robust 2015.

“Canada’s economy arguably retained more hiring momentum in 2015 than would have been expected given the collapse in oil prices, so was overdue for a period of softer job numbers,” TD senior economist Leslie Preston wrote in a note to clients.

“Looking ahead, we expect the national unemployment rate to remain fairly steady over the next few quarters, as weakness in oil-producing provinces is offset by greater vigour elsewhere.”