Ontario’s Opposition leader, Tim Hudak, seems to have found the ideal hot-button issue in his promise to privatize the provincial liquor monopoly if he emerges victorious from whenever the present leaderless minority government ends up holding an election.

The future of the LCBO has been debated ad nauseam since the agency was created back in 1927. But this time the announcement actually appears to have some traction for Hudak, coming during the holiday season when budgets are tight, alcohol is in demand and there’s not much else in the way of interesting news from the provincial government to distract us.

Strangely enough, as Progressive Conservative leader Hudak shied away from the privatization issue in the 2011 provincial election, instead musing on the days a buck-a-beer, when a 24-case of domestic could be had for $24.

But after floating a few other wedge issues in the last election (prison chain gangs, the dangers of sex ed for elementary school children) to no avail, Hudak may just have found the one that actually matters to Ontarians. After all, free-flowing booze is about the only thing that could unite a 50-something libertarian in rural Eastern Ontario and a 20-something hipster in downtown Toronto.

Still, the idea has predictably touched off a firestorm of debate. B.C. Premier Christy Clark floated a similar idea back in the summer, but was forced to back down due to union pressure.

Proponents of LCBO privatization often point to Alberta, which privatized its liquor sales in 1993 and has since seen a rush of new private liquor stores, both mass market and specialty, along with a larger selection of products and longer store hours. Critics also like to cite Alberta for the downside of privatization: Namely the fact that the Alberta government has seen steadily declining revenues from alcohol sales for the past two decades and that the LCBO transferred $1.63 billion to Ontario government coffers last year, excluding taxes. (Hudak’s finance critic, Peter Shurman, recently said the Progressive Conservatives “don’t know” exactly how privatizing liquor sales will affect government revenues.)

In light of the ongoing debate over public versus private liquor stores, here is a look at some Statistics Canada data that tracks the net government proceeds of liquor sales in every province. The data removes the GST portion of the sales tax, along with what it costs provincial governments to run their liquor stores. In other words, it’s a look at the pure profits flowing into government coffers from the sale of booze.

The results here are based on revenue per 100 residents and are adjusted for inflation (in 1993 dollars, which is when Alberta privatized alcohol sales): 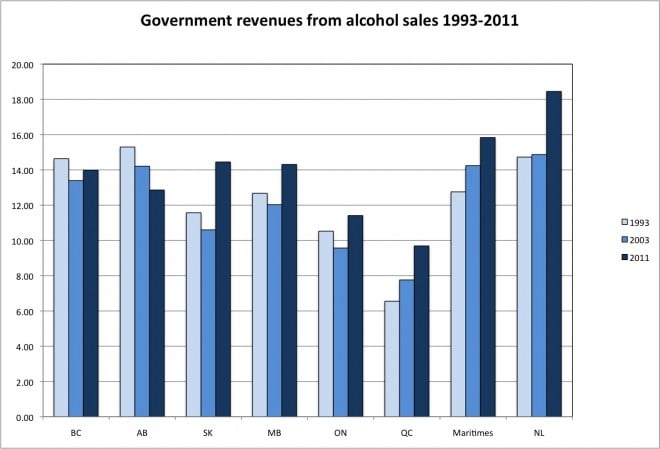 They clearly show that Alberta has faced declining revenue since going private, from $15.30 for every 100 residents in 1993 to the equivalent of $12.86 in 2011, a drop of 16 per cent. However, the province still earns more per capita than either Ontario or Quebec, which long ago allowed private stores to sell beer and wine, but not hard liquor. B.C., which went to a two-tiered system in 2004, has also seen its revenue drop over the years. But most of that decline actually occurred before it allowed private wine and beer sales and revenue was actually growing between 2004 and 2009.

Atlantic Canada earns by far the most per capita from its alcohol sales and, along with Saskatchewan, has been able to grow its revenue nearly 25 per cent since 1993. Quebec takes in the least per person from alcohol sales, although the province has managed to boost revenues by nearly 50 per cent over the past two decades.

What’s interesting in Ontario is that government revenues are substantially lower than other provinces that also have monopolies on the alcohol distribution and sales. Revenues per capita from alcohol have increased just eight per cent in nearly 20 years in the province. Despite moving to a privatized system, the Alberta government still takes in more per capita on alcohol sales than Ontario.

Clearly there’s more at work here than a debate over a public monopoly versus privatization. After all, governments have lots of potential policies in their arsenal to boost revenues from booze whether in a public or private system: alcohol taxes, minimum pricing to discourage consumption, fees for alcohol producers for the privilege of selling their products in government stores, fees for liquor licences. The Maritime provinces, for instance, all have large alcohol taxes on top of provincial sales tax.

One would expect that more taxes, a la Atlantic Canada, would lead to higher prices for beer, wine and spirits. On the flip side, critics argue that privatization has driven up prices in Alberta.

To test this debate, here’s a look at the price of a popular product, a standard 750 ml bottle of Smirnoff Vodka, across the country: 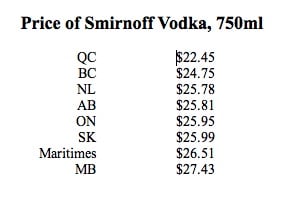 Quebec, which collects the lowest alcohol revenues has the lowest price, while the Maritimes, which collect the most, have higher prices. (It’s not broken down here, but at $27.98, Nova Scotia actually has the highest price for a bottle of Smirnoff in the country.) Manitoba’s high provincial sales tax helped push up its prices. Alberta’s private system has also pushed its prices toward the higher end. (The amount quoted here is from Metro Liquor Stores in Calgary.)

Ontario’s prices seem high given that government revenues from alcohol sales are comparatively low. It costs 17 cents less to buy a bottle of Smirnoff in Newfoundland than it does in Ontario, and yet the Newfoundland government takes in roughly 62 per cent more per capita in alcohol revenues than the Ontario government does.

It’s clear the issue is a lot more nuanced than the debate over public versus private alcohol sales would suggest. B.C., Alberta and Quebec have all allowed some manner of private sales of alcohol. But government revenues from alcohol sales have been growing in B.C. and Quebec. Not so in Alberta. Ontario’s liquor monopoly doesn’t seem to have helped the province boost its sales revenue all that much. Neither Ontario, nor Alberta, had the highest or the lowest prices.

There may be other valid reasons to privatize liquor sales, like better choice of products and more convenience for consumers. If it’s a matter of being able to buy beer and wine at midnight at the corner store, ending the Ontario government’s monopoly on liquor sales may be the best option. If the debate is over whether governments should benefit from higher revenues, consumers should benefit from lower prices, or that alcohol should be taxed into oblivion to keep us all from drinking too much, neither a government monopoly, nor a privatized system seems to have all the answers.

In reply to this article, Jan Westcott, president and CEO of Spirits Canada, writes the following:

A case in point: by exempting beer and bottled-in-Quebec wines from their fair share of the provincial alcohol tax burden, Quebec ranks lowest amongst net return per capita.

The corollary: those provinces with the highest taxes on spirits no longer are home to distilled spirits production as manufacturers consolidated their operations in lower tax jurisdictions.

For example, Ontario jumps to the province with the highest government alcohol revenues per capita once one adds an additional $1 billion ($5.25/100 residents), directly related to local spirits manufacturing.