Could gold's fall be the start of a broader resources slump?

Resource prices have driven the Canadian economy for over a decade. Are the good times coming to an end? 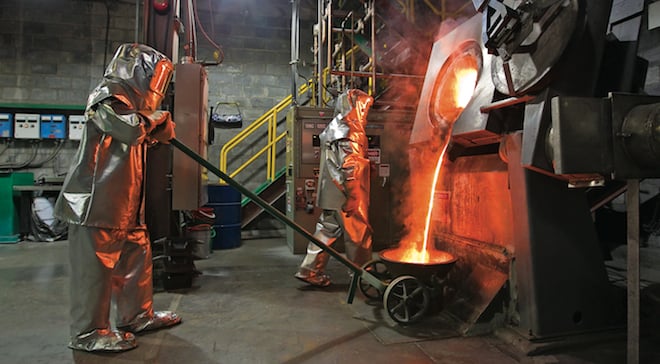 For investors and producers alike, gold’s recent rout was as devastating as it was unexpected. The price plummeted by $200 an ounce over a two-day period last week, suffering its biggest single-day drop in 30 years. Though it eventually stabilized at around $1,400 an ounce, stocks of gold mines—many of them Canadian—continued to be hammered by investors for days afterward, with some reports suggesting that as many as 15 per cent of the world’s gold mining companies are now wallowing in red ink.

There are many theories as to what caused gold to fall so far, so fast. They range from rumours that Cyprus planned to sell off some of its reserves to pay for its bailout, to the easing of fears that central bankers are destroying currencies with their unprecedented stimulus measures. “People thought loose monetary policies lead to rampant inflation,” says Keith Head, a professor at the University of British Columbia’s Sauder School of Business. “But gold prices stayed high, even when the underlying theory was repudiated by actual evidence, and that’s a vulnerable situation to be in.”

The big question now is whether other commodity prices will follow suit. Though gold, which traded as high as $1,888 an ounce in 2011, is unique in many respects—it is valued mostly as a way to store wealth, as opposed to as an industrial input—prices of everything from aluminum to zinc have slumped over the past several years after hitting historic highs, creating fears of a broader crash. Edward Morse, the head of commodities research at Citigroup, recently wrote that “the questions over gold and some overly securitized commodities like copper relate to whether their recent robustness is bubble-like and about to burst.” He claims that 2013 could be the year the decade-long boom in raw-material prices driven by China’s rapid growth finally hears its “death bells ring.”

How it all plays out will be crucial in determining Canada’s future prosperity. Nearly one-fifth of the country’s GDP can be attributed to resource industries and their spin-offs, not to mention half of all exports. “It’s been well-recognized, including by Mark Carney [the governor of the Bank of Canada], that commodities pretty much saved our bacon over the past few years,” says Pierre Gratton, the president of the Mining Association of Canada. But now global forces appear to be working against us, with resource prices falling, just as a once-hot housing market falters and consumers are awash in debt. “Higher prices bring on more supply, which brings down prices,” Gratton says. “That’s the cycle and we’re in a bit of that now.”

The latest shoe to drop came earlier this month when China revealed its growth was slowing more than expected. It said GDP came in at 7.7 per cent in the first quarter, down from 7.9 per cent in the fourth quarter of 2012. That threatens to translate into less demand for everything from lumber needed to frame buildings to the nickel used to make stainless steel.

The news helped suck the air out of Canada’s already lagging stock markets, home to roughly 60 per cent of the world’s mining firms. The S&P/TSX Composite Index has fallen 10 per cent since early 2011 and was one of the world’s worst-performing major indexes in 2012, while the S&P/TSX Venture Composite Index, which tracks mostly junior mining companies, is down by nearly 60 per cent as investors shelve their appetite for risky, early-stage projects. Meanwhile, the Dow Jones Industrial Average, which tracks some of America’s best-known companies, is up 25 per cent over the same period.

It’s a much different environment than just a few years ago, when theories of “peak oil” and even “peak copper” were prevalent. The prices of energy and minerals, when adjusted for inflation, more than doubled between 2003 to 2008, while the price of food increased 75 per cent, according to a 2012 report by the UN department of economic and social affairs. The report called the run-up in prices “unprecedented in its magnitude and duration” and suggested the world is witnessing the early phases of a decades-long “super-cycle expansion” in commodities driven by “the rapid pace of industrial development and urbanization in China, India and other emerging economies.” It seemed like a historic shift in the world’s economic balance of power (previous super-cycles resulted from the industrialization of the United States in the late-19th and early-20th centuries, and the rebuilding of Europe and Japan in the postwar years). Some estimates suggested that the world’s developing economies will represent nearly 80 per cent of global GDP by 2050, compared to about 50 per cent today.

Demand is only part of the equation, though, as every economist knows. Rising prices cause producers to boost production and seek out new reserves of key resources. That, in turn, boosts supply and eventually causes prices to drop—which is why commodity markets have historically been prone to major swings. Copper, for example, hit a high of $4.66 a pound in 2011 amid talk of a looming global shortage. (Copper is used in a variety of industrial applications, including wiring and plumbing.) There were reports of thieves trying to steal church roofs in Britain, and even power lines, with some electrocuting themselves in the process. Just two years later, the price has fallen back to about $3.20 a pound as new mines begin to come online.

With similar price declines under way for other key materials, producers are suddenly being forced to rethink multi-billion-dollar projects. Australia’s BHP Billiton said last year it was postponing several projects worth an estimated $50 billion. Brazilian miner Vale SA has suspended a potash project in Argentina, while Rio Tinto Group, the world’s second-biggest miner of iron ore, is in the midst of a major cost-cutting effort.

How bad this will be for Canada depends on whether this is a mere blip, or the beginning of the end of the Chinese-powered commodities super-cycle. The federal government estimates that the energy, mining and forestry industries contribute more than $30 billion annually to public coffers and employ up to 1.6 million people when related industries are taken into account. Ottawa is counting on revenue from the country’s natural-resource industries to help it meet its goal of balancing the budget by 2015, noting in its “action plan” that there are “more than 600 major resource projects, worth over $650 billion” planned over the next decade.

Citigroup, however, argues that the next 10 years will be defined mainly by a series of commodity-specific booms and busts, as opposed to broadly based increases. “The first quarter provided a clear precursor of what’s to come—the majority of commodities saw prices fall across the board, and those that rose did so for commodity-specific reasons,” Morse’s team wrote. Examples of the latter included natural gas prices that rose because of a temporary stall in production, and cotton prices that spiked because of uncertainty about Chinese buying following reduced plantings.

Others maintain that global raw-material prices will be only temporarily moderated as producers catch up with demand. “I don’t think it’s the end of the bull run in commodities, but I think we will go through a number of years of industrial metal prices being somewhat lower than they have been,” says Patricia Mohr, the vice-president of economics and head of commodities-market research at the Bank of Nova Scotia. “China’s demand will continue to grow, although at a slower pace. But the level of demand is already huge.”

British investment guru Jeremy Grantham is particularly bullish. He argued in a recent U.S. television interview that the combination of China’s rapidly urbanizing population combined with dwindling amounts of cheap, easy-to-access resources points to a future where prices of key commodities continue to soar. He says a sustained rise in the price of oil is helping to further magnify those increases, since it makes extracting and transporting other resources more expensive. Calum Turvey, a professor at Cornell University who is a past editor of the Canadian Journal of Agricultural Economics, says oil’s impact on the price of food is even more direct. “As oil prices rise, ethanol becomes more profitable, which increases the price of corn,” he says. That, in turn, causes farmers to plant more corn, decreasing the supply of other grains and oilseeds and driving up their prices.

In a sector where constructing a new mine can take up to 20 years, the industry is necessarily taking a long-term view. “You’ve also got India and a bunch of smaller economies in Africa that are growing at a very fast rate,” says Gratton. “So even as China’s growth abates, you’ve got other industrializing countries coming behind it that, we believe, will keep demand for materials robust.” He says the current slump is even being welcomed in some parts of Canada, where the recent boom was accompanied by skyrocketing equipment costs and a persistent shortage of labour. “I was in Saskatchewan recently, and they’ve got a lot of investments in uranium and potash and other things,” Gratton says. “You almost get this sense of relief that things have calmed down a little.” Investors, on the other hand, are almost certainly feeling their heart rates rise.