Archie in bits and bytes

You don’t often hear “cutting edge” and “Archie comics” together 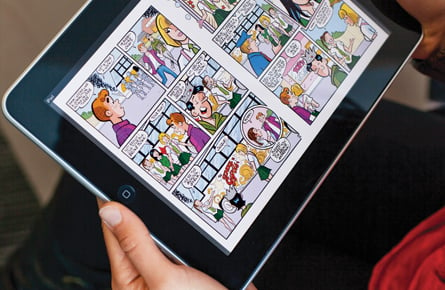 You don’t often hear “cutting edge” and “Archie comics” together, but the adventures of the teen with the tic-tac-toe pattern on his head were the first comics to create an “app” for digital downloading. The reward in 2010 was over two million downloads via iPads and iPhones. Sales of physical comics were also up, thanks to the new publisher, Jon Goldwater: he spent the year unveiling one gimmick issue after another, from an alternate-universe magazine about Archie’s future to an issue featuring Sarah Palin and President Barack Obama. But it’s in the digital world where Goldwater sees real potential: starting April 1, Archie will undercut its competitors, like Marvel and DC, by offering comics in that format at a lower price than print editions. Of course, as Goldwater told Newsarama.com, digital is still a “small” revenue stream, but he expects it “to grow tremendously in the next 12 to 24 to 36 months.”