Noted at the Detroit auto show: The industry's future 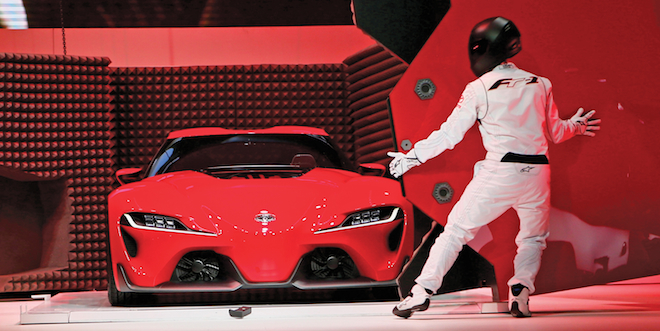 An actor performs as a Toyota FT-1 concept car is unveiled. (Rebecca Cook/Reuters)

Detroit may be mired in bankruptcy, but the automakers synonymous with its name haven’t felt this good in years. With sales finally returning to pre-recession levels, or, in Canada’s case, blowing past them altogether, the 2014 North American International Auto Show finally resembled a real car show again, complete with thundering engines, red-lining speedometers and, of course, cool-looking but totally impractical concept vehicles.

To make room for all those throaty muscle cars, burly pickups and sleek racers on the floor of the show, automakers pushed aside the hybrid and plug-in electric models that, in recent years, got prominent placement as a way to placate the politicians who bailed out the industry with taxpayer funds. A Chevy Volt, the gas-electric hybrid General Motors once described as its “moon shot,” was parked near one of the exits.

Ford set the tone early on by unveiling a new, aluminum version of its full-size F-150 pickup truck, the bestselling vehicle in U.S. for 32 years running. Determined not to be outgunned, or out-trucked, General Motors unveiled the GMC Canyon on the eve of the show and then, the following day, took the wraps off its 625-horsepower Chevrolet Corvette Z06, which Mark Reuss, head of North American operations, dubbed “the big nasty.” In yet another sign of an industry back to its old tricks, a Z06, covered in camouflage, was towed to the Cobo Center through downtown Detroit, snarling local traffic with a police escort, a helicopter and 30 other Corvettes in pursuit. Even Toyota, one week after announcing plans to sell a hydrogen-fuel-cell vehicle in 2015, showed uncharacteristic flash with its new, low-slung FT-1 concept—the “ultimate” sports car. “When the market is growing and companies are bullish, they tend to launch a lot of products,” industry analyst Dennis DesRosiers says of the 50 new vehicle introductions. “And they tend to go a little overboard, as well.”

So, after a few years wandering in the wilderness, carmakers are back to what they do best: selling consumers on big and burly, or just plain fast. The billion-dollar question, however, is whether companies will fall back into the very same bad habits—too many gas-guzzlers chasing too few customers—that got them into so much trouble in the first place.

The rekindled interest in bigger, more powerful cars, trucks and SUVs is only partly driven by waning fears of a spike in gas prices. Carmakers have spent the past several years devising clever ways to improve fuel economy in preparation for strict new U.S. standards that will require them to nearly double the fuel efficiency of their fleets by 2025. They include the use of new lightweight materials such as aluminum and carbon fibre, and investing in new technologies that allow engines to wring more power out of each drop of gasoline. That would normally be a positive development, were it not for the bigger-is-better psychology of North American consumers. “This is the car companies’ dilemma,” DesRosiers says. “They’re pulling their hair out, because they’re putting all this incredible technology into these vehicles, but every time they improve fuel efficiency, the consumer moves up to a larger vehicle, which, by definition, is less fuel-efficient.” 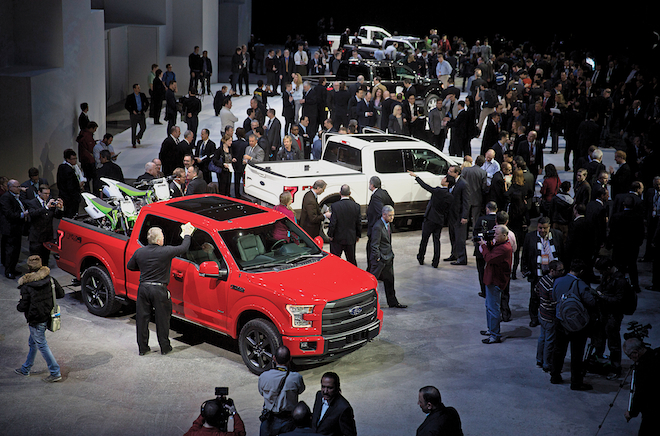 Indeed, larger-truck and SUV sales were among the categories that led to last year’s impressive U.S. auto sales, which clocked in at 15.6 million units, the highest in five years. Canada, meanwhile, posted its best-ever year for car and truck sales in 2013, with large pickups up nearly 12 per cent from the previous year. Most forecasters are calling for continued gains in both markets next year, with the U.S. on track to meet or exceed the 16 million units it sold on average between 1998 and 2007. “The further we get away from the recession, the more we’re seeing an increase in things like large-truck and large-SUV purchases,” says Jessica Caldwell, a senior analyst at the car information website Edmunds. “I do think there’s some pent-up demand out there.”

The new F-150 is a good example of the trend. By using more aluminum parts, Ford managed to slash nearly 320 kg from the truck’s waistline, promising far better mileage than the current leader in the category (no precise fuel economy numbers have been released). Spending less at the pumps is a selling feature that promises to resonate with Ford’s core F-150 customers, but also with those who may be on the fence about becoming one of them. “Obviously, we do exceptionally well with the contractors and those who use it for business,” says Dianne Craig, the CEO of Ford Canada. “But we see demand from the personal-use side, as well.” In Canada, roughly one out of every six car buyers, or 17 per cent, purchased a full-size truck last year, she added.

It’s difficult to overstate Ford’s F-150 gamble. Building a high-volume vehicle from aluminum requires new manufacturing processes and technologies. It’s also risky from a marketing standpoint, since, for most North Americans, the word aluminum brings to mind flimsy beer cans. In a bid to put any concerns to rest, the glitzy F-150 introduction in Detroit featured ear-splitting metallic sound effects reminiscent of a Michael Bay movie, while the truck itself was touted as being forged from “military-grade aluminum” and representing “the future of tough.”

Others also had trucks top-of-mind. While Fiat-Chrysler’s focus was on cars in Detroit, where it launched a redesigned 200 mid-size sedan, CEO Sergio Marchionne went out of his way to point out the importance of bigger vehicles such as the Dodge Ram to the Fiat-Chrysler partnership, which was solidified this month when Fiat paid US$4.5 billion to buy the rest of Chrysler it didn’t own. “We have to protect Mother Goose,” he said. GM, meanwhile, will compete for fuel-conscious truck customers by returning to the mostly ignored midsize pickup segment with the GMC Canyon and Chevrolet Colorado.

Another pitched battle is in the ballooning luxury-vehicle market, which totalled 172,000 vehicles in Canada last year, according to DesRosiers. “Luxury sales in Canada is the fastest-growing segment, and will remain one of the fastest-growing,” he says. While the concept of “luxury” once applied only to large, well-appointed sedans, automakers now sell everything from SUVs to pickups with extras such as heated leather seats, adjustable suspension, in-dash navigation and collision-avoidance systems. Even brands often considered the opposite of “luxury” are making the leap. In Detroit, Hyundai unveiled the second generation of its sub-US$40,000 Genesis sedan, the first-ever Hyundai sedan to offer optional all-wheel drive. Michael Ricciuto, Hyundai Auto Canada’s head of product and strategic planning, says the goal is to take a cut of a lucrative business dominated by brands such as Audi, Mercedes and BMW, while also building a car that will act as a halo for other Hyundai vehicles. “It shows people what we’re capable of,” he says. Sister company Kia, known for funky entry-level vehicles such as the Soul, is also offering an entry-level luxury car called the Cadenza, which starts at $37,900 in Canada, and comes with a 12-speaker stereo, blind-spot monitoring and a rear-view camera. 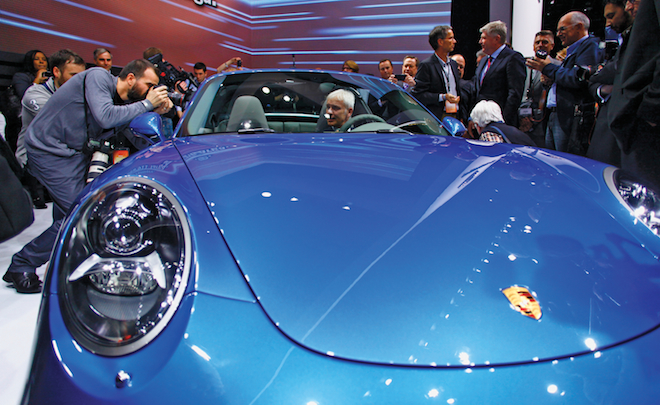 The front end of a Porsche 911 Targa. (Joshua Lott/Reuters)

All that jockeying for position raises the question of whether car companies will be tempted to slash prices to move more metal. That happened in the mid-2000s, when they responded to falling demand for bigger, less fuel-efficient vehicles by slapping deep financing incentives on their hoods. It’s a profit-killing tactic that all automakers have officially sworn off, more or less. “If you look on the road today, the number of models you can buy is significantly higher than 10 years ago, so there’s more to choose from,” says Edmunds’ Caldwell. “But automakers have also been smarter about limiting production, so supply and demand is more in line.”

For his part, Marchionne says manufacturers invested billions to upgrade existing assembly plants, making them more efficient and capable of churning out more vehicles—which could present problems if some manufacturers begin to add new factories. He also thinks demand is flattening, which is going to present problems. “We have not yet seen undisciplined pricing,” said Marchionne. “At least, not through the end of December.”

What carmakers have been doing, though, is dramatically lengthening financing periods to as much as eight years. When combined with ultra-low interest rates, a new car can be had for as little as $100 a month. “Most carmakers are terrified of this,” says DesRosiers. In addition to the risk of putting customers underwater on their loans (because they’ll owe more than cars are worth), the trend to longer amortizations causes buyers to delay car purchases. At present, DesRosiers says, the issue is manageable in Canada, but only because people tend to own vehicles longer. In the U.S., drivers upgrade vehicles after an average of six years. If the trend continues, it could make for a lot of pain later. “They will sell a lot of vehicles in the short term, so that would be a victory,” says DesRosiers. “But it may well be a pyrrhic one.” And Detroit may wind up suffering the kind of post-party hangover it knows only too well.