Bombardier is back on track in Brazil

The Canadian airplane manufacturer not only settled its bitter trade war there, it's leading a new era of investment too 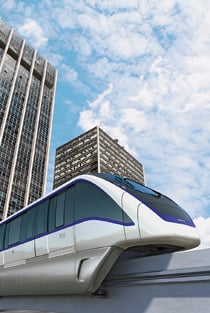 The trade relationship between Canada and Brazil has long been rocky, due largely to an ugly dispute over government subsidies to their respective airplane manufacturers—Bombardier and Embraer—in the late 1990s. During a visit to São Paulo last year, Prime Minister Stephen Harper lamented the “barely $6 billion in business” between the countries in 2010, vowing to renew relations with the South American powerhouse.

Now, the company leading the rebuilding of that estranged relationship is none other than Bombardier. Last month, it opened a state-of-the-art monorail factory in São Paulo. As part of a $816-million contract for a new line of the city’s rapid transit system, Bombardier will build 53 of its INNOVIA Monorail 300 trains in the factory. Designed and tested in Kingston, Ont., the São Paulo monorail trains are a newer version of the ones running on Vancouver’s Canada Line.

At the opening of the plant, the president of Bombardier’s transportation arm, André Navarri, said the facility would be “the world centre of monorail production” for the firm. It may only be the start. Brazil plans to spend $25 billion on railroads and urban transportation in the next five years, including a high-speed train link between Rio de Janeiro and São Paulo. Bombardier, though, has so far said it will stay out of that project as local officials struggle with delays plaguing the bidding process.

The hostility between Bombardier and Embraer, which put Canada on the sidelines for 10 years of booming economic growth in Brazil, “has definitely been set aside,” says Ted Hewitt, an expert on Brazil-Canada relations at the University of Western Ontario. (Officially, the dispute ended in 2001 when it went to arbitration at the World Trade Organization, with no clear winner.) Michael McAdoo, Bombardier’s vice-president for international trade, plays down the old dispute, calling Latin America a “critically important” region. Even the company’s aerospace division sees a land of opportunity. McAdoo forecasts 1,200 business jet sales there in the next 20 years.