So it turns out Bakken oil is explosive after all 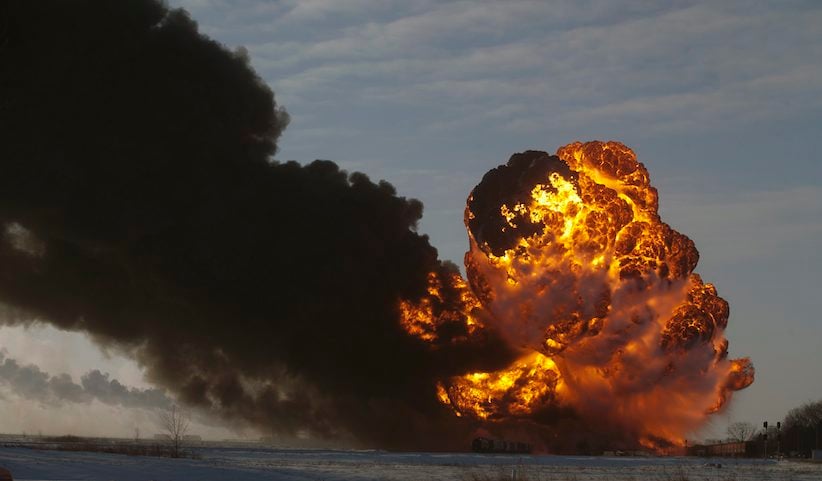 After years of insisting oil sucked from North Dakota’s Bakken shale wasn’t inherently dangerous, producers have been ordered to purge the light, sweet crude of highly flammable substances before loading it on railcars and shipping it through towns and cities across the continent.

State regulators said this week that the region’s crude will first need to be treated, using heat or pressure, to remove more volatile liquids and gases. The idea, according to North Dakota’s Mineral Resources Director Lynn Helms, wasn’t to render the oil incapable of being ignited, but merely more stable in preparation for transport.

It’s the latest regulatory response to a frightening series of fiery train crashes that stretches back to the summer of 2013. That’s when a runaway train laden with Bakken crude jumped the tracks in Lac-Mégantic, Que., and killed 47 people in a giant fireball. In the accident’s immediate aftermath, many experts struggled to understand how a train full of crude oil could ignite so quickly and violently. It had never happened before.

Subsequent studies have shown that Bakken crude, squeezed from shale rock under high pressure through a process known as hydraulic fracturing, or “fracking,” can indeed have a high gas content and vapour pressure, as well as lower flash and boiling points. However, there remains disagreement about whether the levels are unusual for oil extracted from shale, and whether the classifications for shipping it should be changed.

Still, with more than one million barrels of oil being moved by rail from the region each day, regulators have decided to err on the side of caution and implement additional safety measures. For producers, that means buying new equipment that can boil off propane, butane and other volatile natural gases. Under the new rules, the Bakken crude will not be allowed to have a vapour pressure greater than 13.7 lb. per square inch, about the same as for standard automobile gasoline. Regulators estimate that about 80 per cent of Bakken oil already meets these requirements.

The industry isn’t pleased. It continues to argue that Bakken oil is no more dangerous than other forms of light, sweet crude, and is, therefore, being unfairly singled out. It has also warned that removing volatile liquids and gasses from Bakken crude would result in the creation of a highly concentrated, highly volatile product that would still have to be shipped by rail—not to mention additional greenhouse-gas emissions. It goes without saying that meeting the new rules will also cost producers money—at a time when oil prices are falling.

In the meantime, regulators on both sides of the border are taking steps to boost rail safety by focusing on lower speed limits, new brake requirements and plans to phase out older, puncture-prone oil tank cars. Earlier this year, Transport Minister Lisa Raitt said Canada would be “leading the continent” on the phase-out of older DOT-111 tank cars, which have been linked to fiery crashes going back 25 years. There are about 65,000 of the cars in service in North America, about a third of which can be found in Canada.