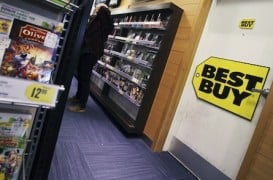 The announcement, made Monday, comes after the ailing retailer said Sunday that its offer to advance talks with company co-founder Richard Schulze on his takeover bid was rejected.

Best Buy says Joly, who is French, is expected to take over as CEO in early September when his visa is secured. Carlson, which operates such businesses as Radisson and T.G.I Friday’s, announced Sunday that Joly resigned from that company.

Shares were down more than 4 per cent in premarket trading as investors realized that a major overhaul to make Best Buy more nimble in a rapidly shifting climate probably won’t happen until next year when the CEO gets more settled. Investors are hoping to learn more of Best Buy’s plan to turn around its business Tuesday when it reports its second-quarter financial results.

Investors may have also been disappointed that Best Buy didn’t pick a retail executive.

“Joly is a rogue agent,” said Brian Sozzi, analyst at research firm NBG Productions. “He comes in and fixes companies and then leaves.” He added that investors won’t learn of a new turnaround plan until after the holiday season.

Joly succeeds Mike Mikan, a board member who has served as interim CEO since April when former CEO Brian Dunn left Best Buy because of what the company called an improper relationship with an employee.

“Hubert was an outstanding candidate for this position and I am confident he will be a great fit for Best Buy,” Hatim Tyabji, chairman of Best Buy’s board, said in a statement. “Hubert’s range and depth of experience in transforming companies is exactly what the company needs at the moment, as is his energetic, imaginative and experienced leadership in executing strategies.”

Over the past 15 years, Joly has developed a track record of successful turnarounds and growth in the media, technology and service sectors, Best Buy said.

In the technology sector, Joly spearheaded the turnaround of EDS, now part of HP, in France from 1996 to 1999. In the service sector, he has led the transformation of Carslon Wagonlit Travel into the global leader in corporate travel management. In 2008, he became the CEO of CWT’s parent, Carlson, based in Minneapolis, whose brands employ more than 170,000 people in 150 countries.

Best Buy is trying to avoid the fate of its rival Circuit City, which went bankrupt in 2009, partly because of changing shopper habits.

Best Buy has been shrinking store size and focusing on its more-profitable products such as mobile phones. It’s also trying to combat the so-called “showrooming” of its stores — when people browse at Best Buy but purchase electronics goods elsewhere, especially online.

In March, it announced a major restructuring that includes closing 50 stores, cutting 400 corporate jobs and trimming $800 million in costs.

Dunn left in April amid an investigation that he had an improper relationship with a 29-year-old female employee. Since that departure, interim Mikan has made strong statements about how he plans to restructure the company, focusing on services and revamping stores.

In early July, Best Buy said it would lay off 600 staffers in its Geek Squad technical support division and 1,800 other store workers.

Earlier this month, Schulze, Best Buy’s largest shareholder with a 20 per cent stake, made a takeover offer for the chain, offering $24 to $26 per share. Best Buy said it was considering the offer, which values the company at $8.84 billion.

Schulze said Thursday that he was committed to his offer for the electronics retailer and has heard from a number of private equity firms prepared to make “significant commitments.”

But Best Buy and Schulze went back and forth in public announcements over the weekend.

According to Best Buy’s statement Sunday, it spelled out certain terms for acquisition talks to proceed. They included a 60-day deadline for the founder to bring forward a fully financed proposal.

“The board showed great flexibility in the details around how an agreement with Mr. Schulze could be implemented so as not to limit his ability to make a definitive proposal for the company that was in the best interest of the shareholders,” according to Sunday’s statement from Best Buy. “Mr. Schulze did not accept the company proposal.”

In response, Schulze issued his own statement: “I am disappointed and surprised by the Best Buy Board’s abrupt termination of our discussions. For the record, we engaged in good-faith negotiations with Best Buy’s Board and its advisors over the weekend and expected to conclude this matter before the company’s earnings announcement early this week.”