Why justifying austerity just got harder

Blunders in the Reinhart-Rogoff theory

The Internet exploded this week with the revelation that researchers from the University of Massachusetts had debunked the widely-accepted thesis from Harvard professors Carmen Reinhart and Kenneth Rogoff that a country’s economic growth could be pegged to the size of its government debt and that an economy would start to go off a cliff when a country’s debt-to-GDP ratio rose above 90 per cent.

The Massachusetts economists, Thomas Herndon, Michael Ash, and Robert Pollin, crunched data given to them by Reinhart and Rogoff for 20 countries and years from 1946 to 2010 and found that the economists had made a number of calculation errors, namely excluding several years when some countries had both high debt and high growth in GDP (mostly in the years after the Second World War.)

They also found that five of the 20 countries cited in the study had accidentally been dropped from the analysis because of a “spreadsheet error” that essentially involved Reinhart and Rogoff skipping the first five countries of the alphabet.

Correcting for the mistakes, the Massachusetts researchers found that annual GDP growth was, on average, 2.2 per cent for countries with debt-to-GDP ratios above 90 per cent. That is in stark contrast to Reinhart and Rogoff’s findings that GDP would instead fall by -0.1 per cent.

Reinhart and Rogoff are now being skewered by their critics, particularly because politicians (including our own) have repeatedly cited the 90-per-cent threshold when justifying austerity budgets and the mistakes open up the possibility that maybe deep cuts aren’t needed to kick start an economy after all. (“How Much Unemployment did Reinhart and Rogoff’s arithmetic mistake cause,” is how The Guardian newspaper put it.) Reinhart and Rogoff have apologized for the errors, but insist they don’t alter their central conclusions that more debt is bad for the economy.

More important for Canadians is the fact that Canada was one of the countries omitted from Reinhart and Rogoff’s analysis, thanks to being pretty high up in the alphabet. (The others were Australia, Austria, Belgium, and Denmark)

In fact, while the Massachusetts economists found that some countries (namely the U.S.) fit Reinhart and Rogoff’s model quite nicely, Canada doesn’t. Their analysis of 64 years of Canadian economic data suggests a fairly weak link between debt levels and GDP growth in this country. If anything, Canada’s economy actually grew with higher levels of public debt. It slowed when debt topped 90 per cent of GDP, but average growth in those years was still 3 per cent of GDP a year, well above the 2.2 average for the 20 countries in the study.

Here is how the Massachusetts researchers calculated the relationship between debt and GDP growth in Canada and other countries that didn’t fit the Reinhart-Rogoff model: 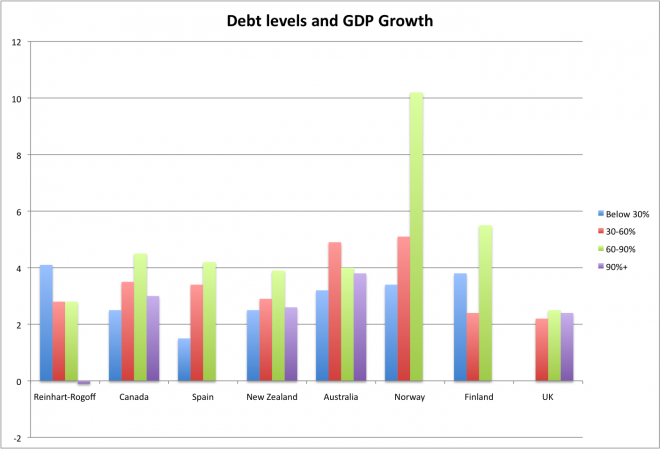 Note: Spain, Norway and Finland have never topped the 90 per cent debt-to-GDP ratio.

Canada’s “sweet spot” for public debt, according to the Massachusetts analysis, is somewhere between 60 and 90 per cent of GDP, which is precisely where Canada stands today (granted, at the high end of that range, at around 86 per cent). Even so, they found that  between 1946 and 2010, Canada had 45 years where the public debt was low, but GDP growth was below optimum levels, which raises the question of whether Canada’s debt was for many years too low.

This analysis is worth considering given the federal government’s austerity plans and the IMF’s recent warning that the government shouldn’t scrimp and save its way into a recession. The Massachusetts economists concluded that Reinhart and Rogoff’s analysis presents “a false image that high public debt ratios inevitably entail sharp declines in GDP growth,” which should prompt countries to reassess their austerity agendas.

While the Massachusetts analysis has poked holes in the previously unassailable relationship between debt and economic growth, even the fiercest austerity critics would acknowledge that there’s probably some threshold where too much government debt becomes a bad thing and that it’s most likely somewhere between Reinhart-Rogoff’s 90 per cent and Kevin Page’s 200 per cent projections.