Jets will be delivered in fourth quarter, says Bombardier 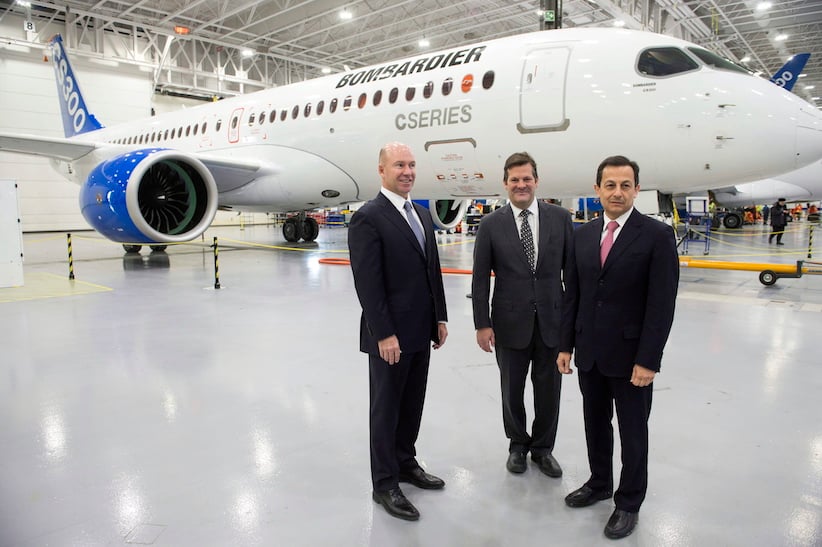 Quebec has already made a US$500 million first payment towards its US$1-billion commitment to the CSeries.

“There is enough liquidity in the company to advance the program to fill all orders that are before us,” Couillard told reporters Sunday after taking a promotional flight on the CS100 at the Farnborough air show southwest of London.

Couillard said the program is on track with a full pipeline of 370 firm orders.

“The additional funding will be needed to ensure more flexibility in the future, identify new markets, develop new models,” he said during the first event of a trade mission to Europe.

“It’s up to Ottawa to make its decision. We have taken the decision. And if this decision was not taken, we would not be here today.”

The federal government has said it’s still considering a request for a matching US$1 billion.

Navdeep Bains, the federal economic development minister, is scheduled to make an announcement about the Quebec aerospace sector at the air show on Tuesday, although details weren’t immediately available.

Bombardier CEO Alain Bellemare has said he expects to meet with Bains this week.

Couillard has said Quebec’s intervention in the CSeries was key to securing orders from Air Canada and Delta Air Lines.

Quebec will receive a 49.5 per cent stake in the commercial jet program once the second US$500-million instalment is made on Sept. 1.

Bellemare praised Quebec’s decision to invest in the CSeries program, which he said supported its efforts to win the latest orders.

“A year ago, people wondered if the program was going to be there. Today we have an order book that will allow us to produce exactly what we had planned a year ago,” Bellemare said.

Couillard rejected criticism from Brazilian rival Embraer, which is threatening to challenge Quebec’s support at the World Trade Organization after saying the Delta order would have been impossible without Quebec’s investment.

“There is not a dollar of subsidy in the support we have given to Bombardier, it is only a trade agreement,” he said. “And I know of no place on the planet, including competitors Boeing and Airbus, that have not received major government support.”

Bombardier announced Monday that it’s received Transport Canada certification for CS300, the larger model of its CSeries passenger jet. The first CS300 will be delivered in the fourth quarter of this year.

The smaller CS100 model has previously been certified by Canadian and other aviation authorities and goes into service with Swiss International Air Lines on Friday.

The first CS300 plane, which can carry more passengers than the CS100, will be delivered to airBaltic of Latvia.

The CSeries program is 2 1/2 years behind schedule and at least $2 billion above cost estimates but Bombardier says its size and fuel efficiency will enable it to operate on routes that were previously not profitable for airlines.