January home sales data had us all wonder whether the downward trip the housing market had embarked on in mid-2012 was already over. After four consecutive months of declines home resales rebounded in the first month of the year from December. Had we already hit bottom?

We hadn’t. February home sales numbers, due out on Friday, will almost certainly show that housing has resumed its southbound trajectory — and at a faster pace this time. 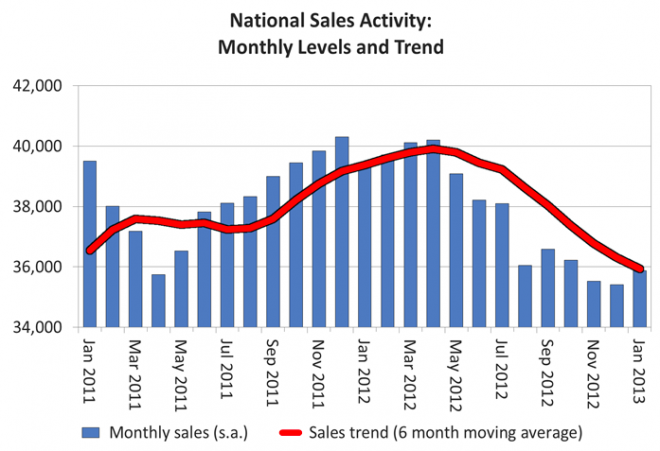 Though figures published by the Canadian Real Estate Association will give us a more refined and complete picture, we can already tell from numbers posted by the major local real estate boards that it isn’t going to be pretty.

Data out of Vancouver is simply dismal: home sales were down 29 per cent compared to February 2012. Detached homes are leading the downfall, with sales a whopping 36 per cent below year-ago levels. Condos, normally the whipping boy of Vancouver’s housing excesses, managed to outperform the market — though that still means sales recorded a 25 per cent decline from February 2012.

Toronto managed a bit better — but not much: overall home sales are down 15 per cent and condos 20 per cent.

And February’s cooling winds also swept those areas of the market that were supposed to soften the impact of the slow-down in Canada’s biggest cities. Home sales were down 26 per cent on an annual basis in Regina and 12 per cent in Saskatoon. Even in Calgary slipped a little, with resales edging down one per cent in year-over-year terms. This doesn’t necessarily invalidate the theory that places like Saskatchewan and Alberta will cushion the impact of slowdowns in Vancouver, Toronto or Montreal — home sales, after all, are quite volatile, especially in winter — but it isn’t a reassuring set of numbers.

What are the implications for home values? Well… so far home prices have been holding up quite well. Of the cities mentioned here Vancouver was the only one to post an overall decline (-3.3 per cent in year-over-year terms). Prices movements, though, tend to lag supply and demand shifts, so we could still see a more pronounced correction later on. One worrying sign in this regard is that the ratio of homes sold to homes newly up for sale in January was woefully low — possibly indicating a supply glut.

If prices do fall, there’s little agreement on just how far they might plunge. Estimates of how much housing is overpriced vary from five to as much as 25 per cent — but home values won’t necessarily  tumble as much. The correction could just as well happen through a few years of stagnation.

That’s what economists at Toronto Dominion predict in a recent paper looking at long-term trends. They expect home prices will simply keep up with inflation over the next couple of years, and grow roughly 3.5 per cent annually after that. That would be well below the seven per cent annual rate of growth to which Canadians have become accustomed to over the past decade, but a far cry from a housing meltdown.

Mildly optimistic forecasts like TDs generally hinge on the Canadian economy being able to eek out some modest growth and being spared any major negative economic shocks. Keep your fingers crossed.