Flat panel 3-D television sets first came out early last year. But few people own one, or know anyone who does. 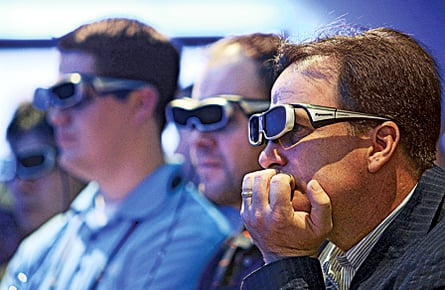 Flat panel 3-D television sets first came out early last year. But few people own one, or know anyone who does. The slower-than-expected sales are believed to be the result of a dearth of available 3-D content to watch, which is why television makers like Sony and Panasonic are joining forces with broadcasters to fix the situation.

Sony recently teamed up with two TV stations in Japan to offer the country’s first 3-D television series, a drama called Tokyo Control, according to the Wall Street Journal. The show is about the workers at the Tokyo Air Traffic Control Center and was made with input from production staff who worked on James Cameron’s 3-D Hollywood blockbuster Avatar. Panasonic, meanwhile, has produced a 3-D music program for satellite TV. Sony predicts that 3-D models will account for 10 per cent of the market by early next year, and that it will have sold 25 million of the sets by March 2011.