Can the media predict a housing bubble?

This week, Yale economist Robert Shiller received the Nobel Prize in economics for his work examining the psychology of the financial markets. Important to Shiller’s theory of how bubbles form are “stories.” In other words, the kind of narratives we tell each other and ourselves about why the latest craze is somehow fundamentally different from — and better than — the previous craze. Among those stories is the oft-repeated axiom that house prices can never go down, which helped inflate the U.S. housing bubble right up until everyone realized that it wasn’t true. (In Canada, we could include the story of how we’re different from the Americans: Our banks are better regulated and take fewer risks, which means rising prices are driven more by economic fundaments, etc.)

Shiller has long argued that media is an important player when it comes to spreading such stories. He wrote an entire chapter on the subject in his 2000 book Irrational Exuberance in which he asserts that: “The history of speculative bubbles begins roughly with the advent of newspapers.”

News coverage can help fuel bubbles, he says, by creating a sort of feedback loop where, for instance, the media starts talking about how house prices are going up, which encourages more people to get interested in investing in housing, which causes the media to spend even more time talking about rising house prices:

I argued that the feedback that creates bubbles has the primary effect of amplifying stories that justify the bubble; I called them “new era stories.” The stories have to have a certain vividness to them if they are to be contagious and to get people excited about making risky investments. Contagion tends to work through word of mouth and through the news media. It may take a direct price-to-price form, as price increases generate further price increases.

In an admittedly unscientific experiment to test the idea that the media can fuel a bubble in the Canadian context, I’ve taken a look at the way the Canadian media has covered the housing market over the years. It shows what seems to be a pretty strong relationship between changes in house prices and changes in the volume of news coverage on house prices.

Here is a chart showing changes in both. House price data is from Statistics Canada’s new housing price index, while media coverage comes from the FP Infomart database of Canadian news outlets (including print, wire, broadcast and online coverage), which was compiled using the keywords “house prices,” “home prices” and “housing prices” (current as of Dec. 12, 2013.) It is not adjusted for positive or negative stories, but simply reflects the overall volume of stories about house prices. Changes to house prices and media coverage are both indexed to 2007, so that 2007 equals 100 on the graph: 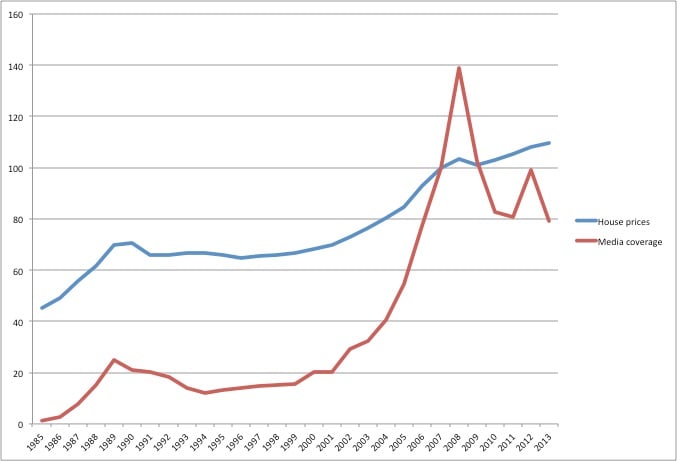 House prices stayed flat or fell for the first half of the 1990s, bottoming out in 1996. News coverage, however, bottomed out two years earlier, in 1994, and was already trending up before house prices began recovering.

Most recently, news coverage peaked in 2008, which is understandable given the meltdown of the U.S. housing market and the burgeoning global financial crisis. House prices also peaked in 2008, fell in 2009 and then quickly recovered. Contrary to what might seem like a never-ending tidal wave of news stories about the country’s overheated housing market, coverage has actually been decreasing since 2008 (3,505 stories this year, compared to 4,375 last year and 6,136 in 2008.) There was a bump in coverage in 2012 that coincides with a faster acceleration in house prices that year compared to the slower growth we’ve seen for much of the past few years.

The news media loves a trend story, so it’s not surprising that rising house prices should catch our attention. What’s more interesting is that when house prices fall or flat line (as they did in the 1990s) the number of news stories about house prices also falls. Having the value of what is likely Canadians’ most important asset stay flat is arguably a significant issue for the economy. But an anemic housing market isn’t the kind of exciting trend that captures media – or public – attention. It is interesting, however, that news coverage of the housing market picked up in 1994 two years before home prices actually grew, meaning the  media wasn’t simply picking up on an existing trend in the housing market.

On the other hand, falling house prices, as we experienced during the 2009 recession amidst a global financial panic, are a pretty big story. So it’s surprising that coverage fell that year. Granted, Canada hasn’t experienced the kind of massive meltdown in house prices that other countries have seen. Our corrections over the past 30 years, including in 2009, have been comparatively small, which might be one reason why they don’t make headlines the same way double-digit price growth does.

In a far more rigorous experiment than this one, Cindy Soo, an assistant finance professor at the University of Michigan, published a paper earlier this year exploring the role that news coverage played in fuelling the housing bubble in the U.S.

In it she created a “sentiment index” by examining news coverage on the housing market in 20 cities between 2001 and 2011. Her experiment uses hundreds of keywords and controls for dozens of variables, such as whether the stories were positive or negative, whether they discussed actual market fundamentals, or whether stories were weekday hard news or weekend lifestyle pieces.

She found news sentiment closely tracked the housing market, so much so that a one per cent rise in news coverage on the housing market corresponded to a 0.6 per cent rise in monthly house prices. The relationship couldn’t be attributed to stories about market fundamentals, such as the strength of the local economy or mortgage rates. Interestingly, as in Canada, news stories about the U.S. housing market also peaked two years before house prices did. Going further, Soo found that her news sentiment index closely tracked surveys of recent homebuyers, who also tended to turn more negative on housing about two years before house prices fell. (Surveys of homebuilders similarly tracked house prices, although they tended to lag both news coverage and homebuyer sentiment by a year.)

So can this help us forecast what will happen to Canadian house prices in the future? Since 2008, coverage of house prices has been falling for most years, although house prices are still rising, albeit at a slower rate. Admittedly, these are extraordinary economic times, coming in the wake of a global financial crisis that has prompted governments both here and abroad to implement incredibly lax monetary policies. But given a growing body of research that suggests the news media can not only inflate a bubble, but forecast when it might peak several years in advance, our comparative silence in recent years may end up speaking volumes.