Can the oil sands really be the saviour of Ontario manufacturing?

Central Canada has largely failed to capitalize on Alberta’s booming oil sector. That needs to change. 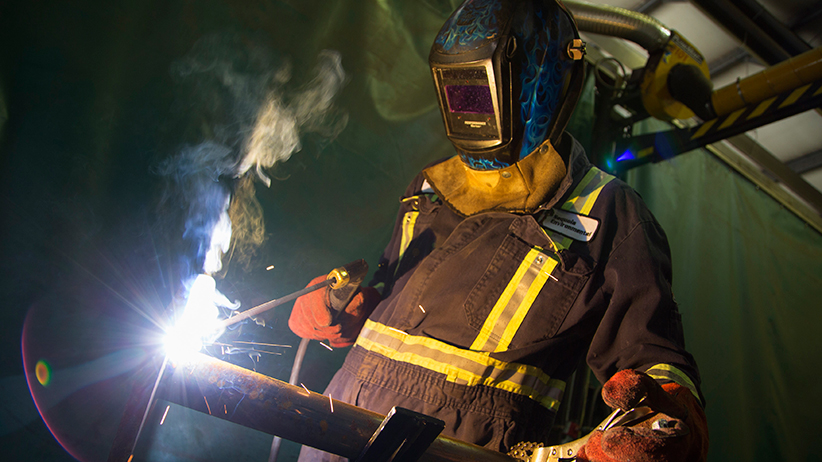 When it began nearly 40 years ago, Alps Welding focused its business on the local chemical companies around its home base near Toronto. But, as Canadian refineries and chemical plants have shut their doors and moved overseas, the company has had to look far beyond its home territory. It now manufactures custom equipment such as pressure vessels and heat exchangers for the petrochemical industry across Canada and the U.S. These days, roughly a quarter of the company’s business comes from the Alberta oil sands. Unlike many manufacturers in Ontario, which have been forced to lay off thousands of workers as business has dried up, Alps has been on a hiring spree, with much of that growth thanks to Western Canada’s booming oil industry.

“It’s a big opportunity and it’s a growing opportunity,” says Alps president Dennis Dussin. “There’s more activity and more work in the oil sands than what the manufacturing industry in Alberta can handle.”

That must sound like welcome news to Ontario’s manufacturing sector, which has lost more than 300,000 jobs in the past decade. Meanwhile, booming Alberta has a seemingly insatiable appetite for new goods and skilled workers. But so far, firms like Alps are proving to be the exception, rather than the rule, when it comes to the ability of Ontario manufacturers to expand their business into the oil sands. Thanks to the steady bleed of manufacturing jobs overseas and the boom-bust nature of the Alberta economy, some doubt that Canada’s energy sector will ever become the silver bullet that will save Ontario manufacturing.

The vast majority of what Ontario exports to other provinces are its services, particularly its financial, business and computer expertise. Meanwhile, between 2000 and 2010, the amount of manufactured goods Ontario exported to other provinces actually dropped—from 8.7 per cent of GDP to 7.7 per cent. As of 2009, the last year for which numbers exist, Ontario exported just $600 million in manufactured goods to the oil sands. That’s a huge figure, but it represents a tiny sliver of the more than $10 billion in goods that Alberta oil companies imported that year, according to a report last year by Canadian Manufacturers and Exporters.

In fact, it’s Alberta manufacturers who have been the greatest beneficiaries of the oil sands boom. The Conference Board of Canada estimates Alberta is home to 70 per cent of all Canadian manufacturing for the oil sands, compared to 14 per cent for Ontario. Alberta companies sold more than $3 billion in goods to the oil sands in 2009. Over the past decade, Alberta’s manufacturing sector has grown by $27.6 billion, while Ontario’s industry has shrunk by roughly as much.

For a time, the biggest hurdles to greater trade between the two provinces appeared to be political. Leaders from Ontario and Alberta seemed to go together like oil and water; interprovincial relations consisted of former Ontario premier Dalton McGuinty deriding Alberta’s “petro dollar” and former Alberta premier Alison Redford demanding an apology. Today, both premiers are history, and the two provinces appear ready to turn over a new leaf. Last fall, Ontario Premier Kathleen Wynne gave a sold-out talk to the Calgary Chamber of Commerce touting the benefits of a partnership between the two provinces, a speech sponsored by several major oil companies. This summer, Ontario opened a trade office in Alberta, the first such office it has opened in another province. Where once Ontario cast itself as the country’s champion of renewable energy, today, the government’s environmental messaging is being tempered by talk of what partnering with Alberta can do for the province’s ailing economy. “It’s a challenging fine line, no question,” Brad Duguid, Ontario’s economic development minister, says. “All of us, obviously, are interested in ensuring that, whatever projects go forward anywhere in the country, all environmental considerations are given. But, at the same time, we know that the Alberta oil sands has a national impact in economic growth opportunities. In particular, Ontario is one of the parts of the country that has billions of dollars at stake in our economy moving forward.” 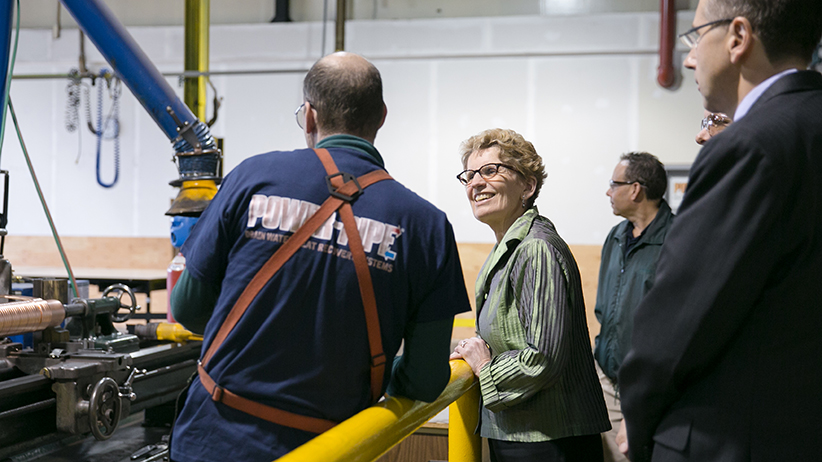 Today, the challenges Ontario faces in growing its share of oil sands business go well beyond politics. For Dussin, one of the biggest obstacles to expanding his business is finding enough local skilled welders with experience in the oil and gas industry. Ontario has an abundance of unemployed welders with backgrounds in the automotive sector, but it can take as long as two years to retrain a welder for the kind of products Alps manufactures, which require workers to know how to use X-ray and ultrasound machines in order to spot tiny flaws. “If we had some help from government to provide some training for these people, we would be more willing to take on someone who doesn’t have the skills and invest in them,” he says.

A far bigger hurdle for Ontario is that oil sands companies are proving to be no different than any other industry, when it comes to their love of cheap manufactured goods—and that means they have become increasingly willing to head outside of Canada in search of the best deals. Oil sands producers imported more than $5.6 billion in manufactured goods in 2009. Low-cost countries such as China are able export steel piping and fittings for a fraction of what it costs to make the same product in a southwestern Ontario steel mill. Even Alberta manufacturers, who benefit from their local connection to the oil sands, are worried their jobs will eventually go overseas, says Dave Rogers, who recently retired as the manager of strategic supply chain at Nexen Inc., the oil company bought out by the Chinese state-owned CNOOC Ltd. last year.

“Almost all of the projects are cost-driven, so there’s tremendous pressure to keep the costs down, and drive the cost down even further, if possible,” he says. “There’s an outward-looking approach toward everything that is bought. You’ll see that in some of the changes. We’re more accepting of going overseas to areas where we haven’t been before.”

Companies are also trying to save money by turning to modularization—a process that involves building most of a piece of drilling equipment overseas, then shipping it to Alberta, where workers complete the ﬁnishing touches. That can save companies millions in construction and labour costs. The Philippines is quickly becoming a major supplier of modular equipment, says Dussin. “That’s a lost opportunity for Canadian manufacturing,” he says. “We could do the same modularization in Ontario or Quebec or New Brunswick.”

Ontario manufacturers may not be able to compete for the business of supplying basic materials such as pipes and bolts. But where they do have an edge, says Rogers, is in some of the more complex equipment that is used to control bitumen-mining operations, such as heat exchangers, pumps and compressors. That type of machinery often requires intensive engineering and design expertise. Oil companies also can’t afford to wait weeks or months for an overseas supplier to send a team to Canada to fix a problem, meaning local manufacturers have an edge.

Even then, the boom-bust nature of the oil sands economy can make it risky for Ontario manufacturers to invest a lot of resources in trying to forge long-term relationships with oil companies. “[Alberta] can’t ever be considered like a growth opportunity,” says Rogers. “It’s way too cyclical. There’s either too much or too little.” Manufacturers tend to flock to Alberta when the economy heats up, then disappear during the lean years. Meanwhile, oil companies typically use that down time to plan their next big project, and those Ontario manufacturers that have packed up and left Alberta end up missing out on those opportunities.

Opening up a government trade office in Calgary is a good start in helping Ontario manufacturers get access to new contracts, Rogers says. But those offices rarely have the resources to be constantly lobbying for new business. “They just hit the high points,” he says. “That’s not really what you’ve got to do; you’ve got to go out and knock on the door.”

Companies like Alps Welding are paying attention. Dussin has held off opening a permanent location in Alberta, but he’s now thinking of launching a sales office in the province to help capture more oil sands business. However, he also knows there’s only so much Alberta can do to fill the gaping hole in Ontario’s manufacturing sector. “I think the oil sands is one part of the equation, but I don’t think it’s something Ontario manufacturers should rely on exclusively,” he says. “I don’t think it’s wise or realistic to think of the oil sands as the saviour of all manufacturing in Ontario.”