The Canadian parka maker plots a major expansion—starting with China 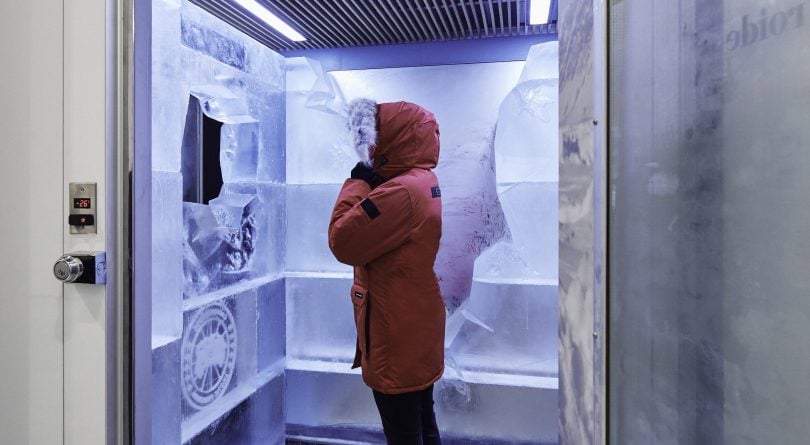 Outside, Hong Kong was a balmy 26° C, but the new Canada Goose store in the ritzy International Finance Centre—known locally as “IFC”—was still lined with parkas. The store, which opened in October in an office tower-turned-shopping mall, carries more than 300 products, some stored in a series of floor-to-ceiling racks, packed tightly together. Like old-fashioned rolling library shelves, the racks spread apart and squish together by spinning a large wheel on their ends.

Visitors can try on a red expedition parka—designed to keep the wearer comfortable at extreme temperatures—and walk into the store’s cold room, which can be set down to -30° C. Their bare ankles might sting, but the mid-weight jacket does indeed feel like a nice warm hug—albeit one that retails for around $1,000.

A smiling store manager explains that despite the usually warm weather—winter in Hong Kong rarely dips below double digits—the locals were still going crazy for Canada Goose. Indeed, the store was busy on a Friday afternoon with about a dozen shoppers and an equal number of attentive salespeople. “People buy them for trips abroad, like skiing in Japan,” the manager says. “Lots of parents buy them for their kids who are studying in Canada and the United States.” The store was sold out of coats for children aged two to 12.

MORE: The Canadian startups that could be billion-dollar breakouts in 2019

The Hong Kong store is Canada Goose’s first entrée into China; a Beijing store was scheduled to open in November but indefinitely stalled due to “ongoing construction,” the company said (It is perhaps worth noting the delay occurred amid rising tensions between China and Canada over the detention of an executive from Huawei, the Chinese telecom firm). The company also now has a regional office in Shanghai and, while remaining somewhat coy about specific plans, clearly hopes to expand further in the Chinese market. In anticipation of a growing Asian clientele, Canada Goose has introduced new sizing based on a body analysis of over 16,000 Korean, Japanese and Chinese frames.

It would be an understatement to say that Canada Goose has had a very good year, laying the foundation for an even better 2019. In addition to breaking ground in China, the company also announced the opening of three more stores in North America: Vancouver, Montreal and ritzy little Short Hills, N.J. These new stores will all feature now-familiar Canada Goose touches, including white marble and work by Canadian Indigenous artists (five are outfitted with cold rooms, including the new Montreal location). Canada Goose now sells products in 38 countries.

“This year has really been about setting up the future so we can be a long-term and enduring brand for decades to come,” says Dani Reiss, CEO of Canada Goose and grandson of founder Samuel Tick. Reiss says his products transcend weather. “One of our best markets is Tokyo, and it almost never snows there.”

Canada Goose’s core business is parkas, but the company is also expanding its investment in cold-weather products. In November, the firm acquired Baffin Inc., a Canadian footwear company based in Stoney Creek, Ont., for $32.5 million. Baffin and Canada Goose share a similar narrative of unbridled outdoor enthusiasm, with overlapping references to the North and South Poles and Mounts Everest and Rainier. “We get to leverage their best-in-class products to build a very strong Canada Goose footwear offering, which is part of our long-term strategic plan,” says Reiss.

Part of that plan is recognition as a global luxury brand. In 2018, Canada Goose became the first Canadian company to make it onto Deloitte’s annual Global Powers of Luxury Goods list, a report on the top 100 luxury players from around the world. It was listed at a very respectable No. 82, with total sales revenue (fiscal year 2016) of US$307 million. It was also the fastest-growing company on the list, based on a compound annual growth rate of 36 per cent between 2014 and 2016. The report also noted that sales in the Canadian market jumped a whopping 63 per cent over that period. (Being a luxury brand has its downsides: a British high school banned the coats and other high-end brands to prevent students from bullying less affluent pupils.)

Reiss says that Canada Goose—with its technical bona fides and “made in Canada” appeal—drives consumer demand through authenticity. “Our products have lived in the coldest places on Earth for decades, and then we brought them into urban centres and people saw how well they worked,” he says. “We’re a function-first brand and we tell great stories. People today crave real things.”

While Canada Goose has experienced remarkable growth since Bain Capital bought a majority ownership stake in 2013, the company also loves to embrace its humble origins, describing how it was “founded in a small warehouse in Toronto” in 1957. The original parkas were intended for snowmobilers and scientists posted in places like Antarctica; the brand didn’t take a fashion turn until after Reiss assumed the reins in 2001.

Reiss has steadily raised the profile of Canada Goose, engaging celebrities to transform his jackets from high-performance necessities to coveted status symbols. The company has long sponsored the indie-darling Sundance Film Festival, providing its coats to both filmmakers and jury members to be photographed while wandering around quaint Park City, Utah.

In March 2015, New York magazine published a story titled, “What made this the winter of the Canada Goose?” which noted that Canada Goose jackets transitioned quite rapidly from the garb of research scientists to being worn by stars like Daniel Craig and Emma Stone to being found on “someone smoking a cigarette outside a West Village wine bar or draped around a chair at a Cobble Hill brunch spot.”

While the boost from Sundance is undeniably helpful, it’s actually Canada Goose’s practical roots that will help drive even greater growth, says Milton Pedraza, CEO of the Luxury Institute, a consulting firm in New York City. “They have the credentials and you’re willing to pay a premium for that product,” he says. “People see that this is a timeless product that is going to last for a long, long time. And it’s become a real status symbol for millennials, who are now coming into greater earning power.”

Even as Canada Goose has evolved into a truly global brand, the company has maintained its “made in Canada” commitment. In September, Canada Goose opened its third and largest manufacturing facility in Winnipeg (and seventh manufacturing facility in Canada)—an event attended by Prime Minister Justin Trudeau, who wore a suit but no tie and spent some time taking selfies with uniformed factory workers.

All of this has happened at a time when “Canadian” is a particularly good brand to have. On the world stage, the Canadian brand has evolved in recent years from being a generally pleasant, cold place to an endearing model country inviting to refugees and not containing Donald Trump.

Reiss says that making its core products in Canada is absolutely critical to the brand. “It’s like a Swiss watch—you can’t imagine it not being made in Switzerland,” he says. “Our jackets are very much the same.”

Along the way, even as Canada Goose has matured and become increasingly perceived as a luxury good, Reiss has continued to garner goodwill by working with environmental outreach organizations like Polar Bears International and Arctic resource centres that provide free materials like buttons and fabric to Inuit sewers looking to make clothing for their families.

Of course, the company’s history has not wholly escaped controversy. While many design houses—including Burberry, Gucci and Michael Kors—are renouncing fur, Canada Goose continues to incorporate coyote fur in its parkas, claiming “the ethical sourcing and responsible use of real wild fur.” At the Hong Kong store, when a visitor gravitated toward the very soft grey fur on an expedition jacket, the PR rep immediately—and perhaps a little defensively—launched into a spiel about why using real fur is essential for wind protection and comfort.

While fur adds a luxurious dimension to the polyester and duck down, it also makes the brand a target of animal rights activists, who protested at the opening of its Montreal store in November.

Such tensions illustrate the kinds of adaptations Canada Goose might be under pressure to make to remain relevant in a changing world. But, thus far, the brand has done a remarkable job of maintaining its core values while pursuing an aggressive but carefully managed growth strategy. “Growth has to be strategic,” says Reiss. “I’ve seen companies destroy themselves because they become popular and they start throwing their logo on random products.” Canada Goose, he says, is committed to remaining a high-performance winter wear brand. “We know who we are and we’re not getting into bathing suits and flip-flops. But there are a lot of other opportunities down the road.”