Middle-class incomes are stuck: Why it matters and how to fix it

My colleague Stephen Gordon challenges the notion championed by Liberal Leader Justin Trudeau that Canada’s middle class is facing hard times. Gordon correctly points out that total income, measured at the family level, has seen some growth over the last twenty years. Look at the data another way, though, and you’ll see more troubling evidence.

Read: To Justin Trudeau and Chrystia Freeland, RE: the middle class – by Stephen Gordon.

The chart below lays out median annual earnings — adjusted for inflation — over the last 35 years. The data show that, for males, median earnings started at $43,500 in 1976 and have progressed downward since. The economic booms of the late 1990s and mid-2000s failed to move the needle for middle class men. The pattern for female earnings, on the other hand, is quite different. Since women on average work fewer hours for lower wages than males, overall female earnings are lower than for males. However, female earnings have followed a clear upward trend over the past three decades, which reflects both more participation in paid work by women and growing wages. 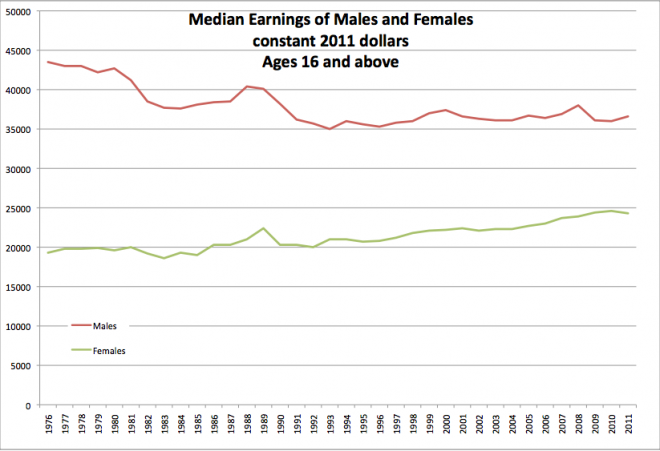 These data suggest that the growth in middle family incomes is not widely-based. To continue the past decade’s family-level income growth, women would have to work still more hours and the occupations where women predominate would need to show continued wage growth. Neither is assured.

What’s gone wrong with the job market for men? Across rich countries, jobs featuring routine tasks — like assembly line worker or accounting clerk — have declined, while the number of cognitive, non-routine, and personal service jobs — think: health worker, or interior designer — has increased. The net result of these changes is a hollowing out of the labour market that has hit males hardest. Evidence of this is most abundant for the U.S., but Canadian trends appear quite similar in many respects. This job polarization seems to be related to global developments like technological change, trade patterns, as well as institutional factors such as the decline of unionization.

In my view, a society where big slices of the population don’t benefit from economic growth invites trouble. Some worry about fairness, and the implications of the concentration of economic power. But even if all you care about is an overall growing economy, stagnating middle incomes can be a problem in a democracy. Take the case of the B.C.’s rejection of the HST. A poll of British Columbians taken around the time of the 2011 referendum revealed that most respondents believed the HST to be a growth-enhancing tax structure, but they didn’t think the benefits of that growth would accrue to them. In order to maintain support for economic measures that grow the economy, the beneficial effects of growth need to be widely felt.

What can we do about this? There are three policy options: We can tax, fight, or adapt.

The first option is to harness the tax system to counteract labour market stagnation. Why not let the market determine wages and then redistribute some of those earnings around with the tax system? The problem here is the math — the number of people in the middle is too large to be paid out of revenues from higher taxes at the top. A six per cent increase to the top federal income tax bracket, for example, might bring in $1 or $2 billion per year — not nearly enough to compensate millions of middle-earners with stagnating wages.

The second potential solution is to fight the global changes affecting wages. We could try to hold back international trade and technological advance; freeze the economy in place by preserving jobs in existing industries. With this solution, we lose the great benefits that flow from international trade (a greater variety of cheaper goods) and the dynamism that comes from new technologies. Even if it were possible to halt change, we would simply lock in stagnation.

The third choice is to adapt to the world we have. Rather than striving to ossify our economy in some idealized previous condition, we embrace and adapt to the global changes we are seeing. We can build the labour force that is needed now and prepare for the one needed in the future. Demand for cognitive, non-routine, personal service, and creative labour remains high. A still-more educated workforce gives the next generation of Canadians the best chance at carving out their own well-paying niche. We can ensure our tax system encourages and rewards entrepreneurship and innovation so that new high-paying jobs continue to be created here.

Quick or easy fixes are elusive. Instead, the best approach is to focus on long-run structural measures — like education — that can build a sustainable framework for broadly-based income growth for the future.