“May I ask you a question, Prime Minister?” former U.S. Treasury secretary Robert Rubin interjected. Stephen Harper had just finished enumerating the virtues of the Canadian economy to a mostly American audience in New York during an official visit to the U.S. some three weeks ago. “My impression,” Rubin continued, “is that with all the great strengths of Canada, productivity still has not increased at the rate that it has in some of the competitive countries—for example, ours.”

As far as the economy goes, productivity, or output per hour, is perhaps the one Canadian inferiority complex that survived the Great Recession. Canada, goes the conventional wisdom, was prudent with its banks, and—let’s say it—lucky with high commodity prices. But it is not competitive or innovative. Battered Uncle Sam still beats us at that.

Initially, we thought it was all the government’s fault. “Canada had high and variable inflation. Large and growing public debt. Trade restrictions externally and internally. One of the highest rates of taxation on capital in the world,” recalled (pdf) economist Don Drummond. But then came NAFTA, the Bank of Canada’s inflation-targeting, the federal budget cuts of the 1980s, the GST and much lower corporate income tax rate. The benefits were many and varied—except for Canada’s productivity rates, which got even worse in the early 2000s.

Maybe the government wasn’t the culprit—or, at least, no longer the culprit. Perhaps it was a matter of culture. Perhaps the root cause of Canada’s persistent productivity problem lay inside corporate boardrooms, with executives too cozy to climb to the top of the world. Managers too feckless to take risks. Countless surveys of Canadian businesses found evidence of attitudinal shortcomings compared to the Americans. At least among economists and policy wonks, productivity became a national hang-up.

Recently, though, an alternative explanation has emerged: Perhaps our measurement of productivity is at fault. It is a persuasive and possibly revolutionary idea and it’s the reason why Econowatch decided to dedicate a week-long special report to the issue of productivity.

Statistics Canada, which compiles such numbers, however, seems uninterested in investigating the hypothesis of a measurement error. The agency—known among economists for its high-quality and extensive research, generous data sharing and, among reporters, for its quick and helpful feedback to media inquiries—appeared uncharacteristically defensive on this issue.

When a couple of Canadian economists published research (pdf) last December showing that using an alternative methodology yields much better productivity growth rates, StatsCan was quick to reject it, even though one of the authors, Erwin Diewert, a professor at the University of British Columbia’s Vancouver School of Economics, is widely regarded as one of the world’s finest brains in the field. (His co-author was Emily Yu, an economist at the Department of Foreign Affairs and International Trade.)

In its official response to the study, Statistics Canada dismissed the Diewert-Yu estimates as incompatible with internationally accepted methodology, including the one used to calculate the U.S.’s productivity growth rate. “Since Canadian productivity performance is often compared to the productivity performance in the United States, the methodology behind the estimates for Canada should be comparable to the largest extent possible to that used by the U.S. Bureau of Labor Statistics (BLS),” wrote (pdf) Wulong Gu, of StatsCan’s Economic Analysis Division.

In a rebuttal to the rebuttal, however, a second group of independent economists stated that StatsCan’s own methodology isn’t, in fact, closely comparable with the one used by America’s bean counters. Notably, one of those saying so was Michael Harper, a retired BLS official who helped design the U.S.’s current productivity measure and ran the Bureau’s productivity program until 2011.

“We find the gaps between the stated procedures for MFP estimation [a measure of productivity commonly interpreted as technical progress] used by Statistics Canada and the BLS are substantial,” Michael Harper concluded in an open, written response (pdf) he co-authored with Alice Nakamura, another renowned expert on productivity, and Lu Zhang, both from the University of Alberta School of Business. On the phone with Econowatch, Nakamura described StatsCan’s statement that it crunches the numbers roughly the way the BLS does as “misleading to the point of being harmful.”

In calculating MFP, StatsCan and the BLS use the same “bottom-up” methodology. The BLS, however, then does the math again with the “top-down” approach used by Diewert and Yu, a practice, write Harper, Nakamura and Zhang, that constitutes “an important consistency check.” The Bureau, according to the authors, is able to obtain roughly the same numbers whether it uses the bottom up or top down method.

Another important difference, write Harper, Nakamura and Zhang, lies in the way StatsCan and the BLS handle one set of industry-level statistics needed to measure MFP, called internal rates of return (IRR) on capital. The BLS replaces IRR values it deems implausible with an internationally accepted alternative. StatsCan does not.

None of this indicates that the BLS’s way of doing things is better. But StatsCan’s dismissal of the Diewert-Yu study based on issues of compatibility with U.S. statistics seems perplexing if Canada’s official way of computing multifactor productivity is significantly different from what is standard practice south of the border.

There are, as well, questions about the way StatsCan has been handling IRR statistics. Access to those numbers would enable outside economists to assess the quality of StatsCan’s MFP measurement independently, which can help defy groupthink, catch mistakes, and lead to higher-quality statistics. Such external feedback is deemed essential at the BLS, according to Michael Harper, et al. The Bureau publishes IRR statistics on its website on the same date it releases its official MFP measure.

StatsCan has provided IRR data for up to 2008 to two publicly accessible websites (see here–opens an xls file–and here), but these are unofficial statistics. The official ones, as well as other underlying data used to compute MFP, “are available and have been used by outside researchers at Statistics Canada,” the agency wrote in a email. This came as a surprise to several economists Econowatch spoke to for this story. The IRRs, though, aren’t publicly available on the StatsCan website. When asked why, the agency replied by saying that they “do not meet the quality standards of Statistics Canada to be released as official products.” Yet these are the data StatsCan uses to compute the country’s official measure of multifactor productivity.

StatsCan also told Econowatch that, “Regardless of which estimate is used, the overall trends in multifactor productivity growth in Canada remain consistent.” Both the official estimate and the Diwewert-Yu estimate, it added, “point to a general slowdown in productivity growth over the past decade in Canada and relative to the United States.” While that’s true for the past ten years, the picture since 1961 looks quite different: 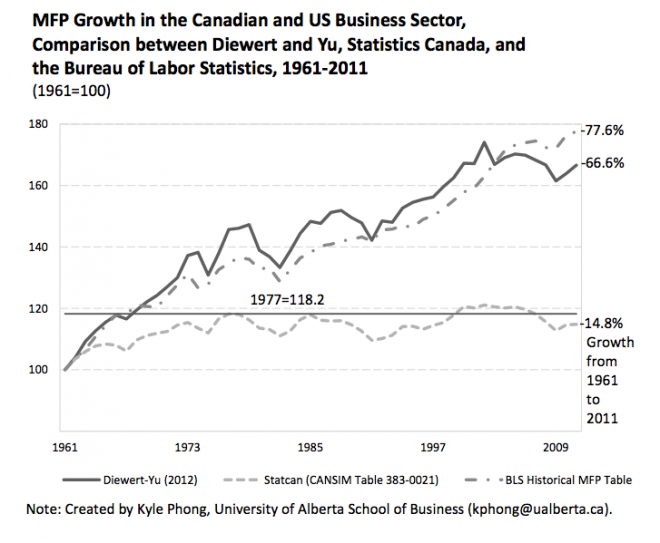 Back in New York, Prime Minister Stephen Harper proceeded to address Rubin’s somewhat indelicate question by listing a number of policies Ottawa hopes will spur Canada to catch up to its southern neighbour, or at least get closer to it: investment incentives for the manufacturing sector, more trade liberalization, and using government money to encourage the commercialization of research and development activities.

So far such policies have been little better than a shot in the dark. Recently, sensible people have advanced a new hypothesis about the origin of Canada’s—real or imagined—productivity crisis. Investigating this possibility to the fullest extent seems a no-brainer.

Of course, a new consensus that Canada’s productivity is actually better than previously estimated shouldn’t discourage the adoption of measures in government and industry targeted at improving productivity growth. There’s always room for improvement. But there’s little question that better statistics—if this is indeed the issue—would greatly improve our policy aim.