Too bad that was before the fiscal cliff deal... 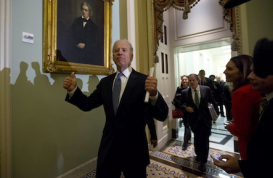 Canadian firms expect higher sales growth and are planning to step up investment, the Bank of Canada’s Winter Business Outlook Survey shows. Prospects for hiring were also rather upbeat, with 42 per cent of the 100 businesses polled by the BoC saying they expect to increase their employee ranks over the next 12 months.

On a less positive note, firms also reported a greater amount of spare capacity in the economy, with only 34 per cent saying they would struggle somewhat or significantly to meet an unexpected jump in demand, down from 47 per cent in the prior three-month period. Labour shortages also seemed to be much less of a concern, with 25 per cent of firms saying they faced the problem, down from 33 per cent in the previous survey. Still, considering the current state of the global economy, all this sounds like a rather optimistic outlook.

There’s one big catch, though. The survey was conducted in November and December, when many Canadian businesses likely still had faith that Washington would find a way to sort its self-made fiscal crisis. The survey, unfortunately, tells us nothing about the collective mood of Canada’s business sector in the wake of the Hail Mary fiscal cliff deal of Jan. 1 and looking on to debt ceiling talks that promise to be just as painful and inconclusive.