Canadian climate change regulations: how *not* to do the simple, sensible thing

For the same current total cost, we could be cutting 38 per cent more GHGs 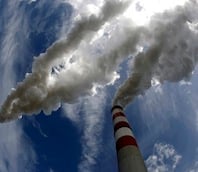 I described here one of the reasons why economists prefer market-based approaches such as carbon taxes or cap-and-trade: markets take some of the deadweight loss of regulations and—as Eric Crampton puts it—turn it into “crunchy tasty tax revenue.” The other reason is that regulations are generally inefficient: they don’t always concentrate efforts on the cheapest way of achieving the stated policy goal.

The National Round Table on the Environment and the Economy (NRTEE) has released a report (176-page PDF file) that includes a section on the cost-effectiveness of the various measures that have been implemented and proposed in Canada. These include policies set by both the provincial and federal governments, so the inefficiencies it identifies can’t all be blamed on Ottawa.

Each measure to reduce greenhouse gas emissions has its own cost, and to make things simple, the NRTEE places them in three categories: low cost (less than $50/tonne), medium-cost (between $50/tonne and $100/tonne) and high-cost (more than $100/tonne). Here’s what low-, medium and high-cost measures mean:

Market-based policies such as British Columbia’s carbon tax, Alberta’s specific gas emitter program and the Western Climate Initiative all generate low-cost-abatement. Policies based on market incentives are designed to simulate lowest-cost emission reductions. Similarly, electricity policies that are timed with the natural turnover of capital stock — such as the federal government’s electricity performance standards and some portion of Ontario’s coal phase-out — tend to generate low-cost abatement as well because they don’t require capital investments to shut down before the end of their useful life. Policies in the waste sector (mainly provincial landfill gas regulations) and agriculture sector (included as offsets in Alberta’s Specified Gas Emitter policy) also tend to access low-cost abatement opportunities.

Most medium-cost emission reductions come from the electricity sector and are weighted toward Ontario. The Ontario coal-fired electricity phase-out is therefore likely a significant driver of these reductions, as it accelerates the retirement of some plants ahead of their normal project life.

Emission reductions from vehicles — such as those induced by the federal vehicle standard — tend to have high marginal abatement costs overall, because individuals require strong incentives to switch to smaller, more fuel-efficient vehicles or vehicles that use alternative technologies like hybrid or electric engines. Emission reductions in commercial and residential buildings also tend to be largely high cost on a dollar per tonne basis, partly because buildings and appliances tend to become more efficient over time even in the absence of policies, thus reducing the incremental effect of policies implemented across all provinces to increase efficiency. Replacing more carbon-intensive electricity generation with low-carbon sources can have high costs as well, though as discussed below, electricity reductions are spread across all three cost levels. Finally, [carbon capture and storage] projects in Alberta and Saskatchewan are estimated to drive both medium- and high-cost reductions, depending on the specific project.

If we’re willing to pay a certain economic cost to reduce greenhouse gas emissions, then we’d also want to translate that sacrifice into the biggest possible reduction. A sensibly-designed climate change policy would go after the low-hanging fruit first: implement the low-cost reductions first, and then move on to the higher-cost measures.

But that’s not what we do here in Canada. Here is Figure 20 from the NRTEE report: 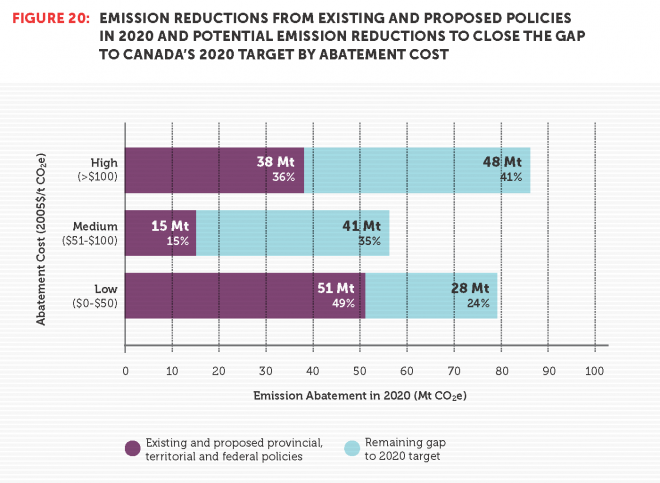 The purple areas represent measures that have been implemented and proposed, and the blue areas represent what is required to meet the targets for 2020. The first thing to note is that 28 Mt of the 79 Mt in the low-cost category are not being addressed by existing measures. On the other hand, a remarkable amount of policy attention—amounting to 37% of targeted emissions—has been paid to the most expensive ways of reducing greenhouse gas emissions.

To get an idea of the size of the gains that are available, let’s assume for a minute that all projects cost $25 in the low-cost category, $75 in the middle group and, say, $150 for high-cost measures. This would mean that the costs released by relaxing 25 Mt of high-cost measures could be re-allocated to implement all the low- and medium-cost measures identified by the NRTEE. In other words, for the same total cost, emission reductions could by increased by 38% simply by concentrating on the least-costly measures.

This is a general problem with regulatory approaches: cost-benefit analyses are either not done, or ignored in the name of political expediency. If there were a price on carbon, the private sector would make it its business to implement all the low-cost emission reductions first, before moving higher up the tree. Indeed, much of the existing low-cost emission reductions are due to the market-based measures already in place, such as those listed by the NRTEE in B.C., Alberta and Ontario.

A sensible climate change policy doesn’t just reduce emissions, it also seeks to minimise the economic costs of doing so. As the NRTEE puts it,

Despite the concentration of low-cost reductions, the pursuit of some high-cost emission reductions suggests that governments have been willing — knowingly or not — in some cases to implement policies that tackle more than just the “low-hanging fruit”.