Canadian home sales and prices: down but not quite 'sustainable' yet

The Canadian housing market continued along its gradual downward trajectory in October, with sales of existing homes lower compared to both the previous month and year-over-year levels, as prices registered the smallest increase since May 2011, the Canadian Real Estate Association said today.

Home resales dipped 0.1 per cent in October from September and actual, non-seasonally adjusted, sales were down 0.8 per cent from October 2011. Prices were still growing, but moderately, up a modest 3.6 per cent from September, the sixth consecutive month of slowing gains. The price increase for townhouses and condo units was even smaller, at 1.2 per cent and 1.5 per cent respectively.

And in a further sign that supply is adjusting to weaker demand, the number of homes that went up for sale in October was down 3.8 per cent after a jump in September, with the Vancouver and Toronto areas leading the way. Calgary, on the other hand, bucked the trend, topping the charts of local markets that saw year-over-year sales increases and registering faster growing prices as well.

All told, after a strong showing in the first half of the year, the level of home sales in 2012 will likely come in roughly in line with the decade’s average. 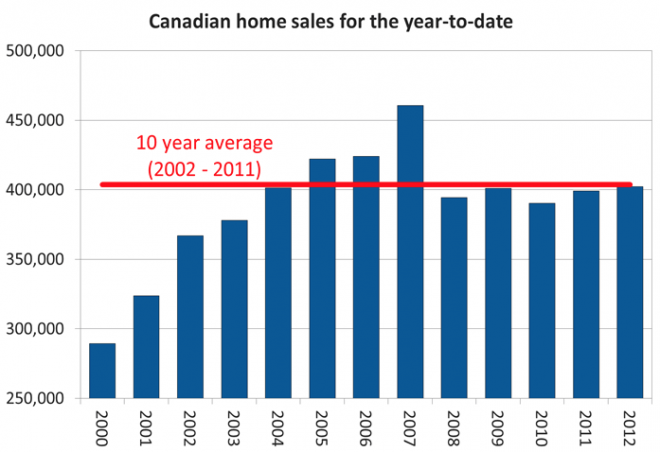 This, according CREA’s chief economist Gregory Klump suggests that “the Canadian housing market overall has returned to a more sustainable pace.”

“More sustainable”? No doubt. But not quite “sustainable” yet, if you consider the market has been soaring for much the past 10 years.