August resale and housing starts figures are now out for all three of Canada’s biggest cities, and it’s not a pretty picture.

When the August resale data for Vancouver came out last week, the headline news was that sales had fallen to their second lowest level for the month since 1998. Sales were 30 per cent below what they were in August of last year and 40 per cent lower than the August average of the past 10 years.

But the numbers are even worse than the headline reveals. On paper, August 2008 holds the record as the weakest month of the past 15 years. However, it had two fewer week days than August 2012. If calendar differences are taken into account, last month represents the lowest sales volume of any August in 15 years. 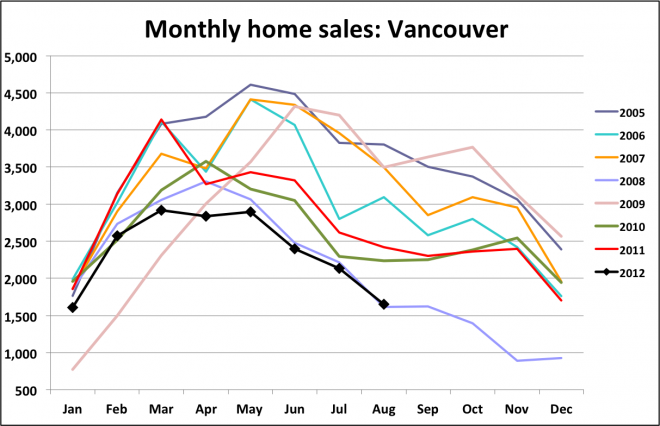 At the same time, total months of inventory in Vancouver hit double digits for the first time since 2009. (Months of inventory represents the length of time it would take to sell all the homes listed for sale given the number of sales in the previous month. In other words, it is a quick snapshot of supply and demand: The higher the number, the worse the reading.) 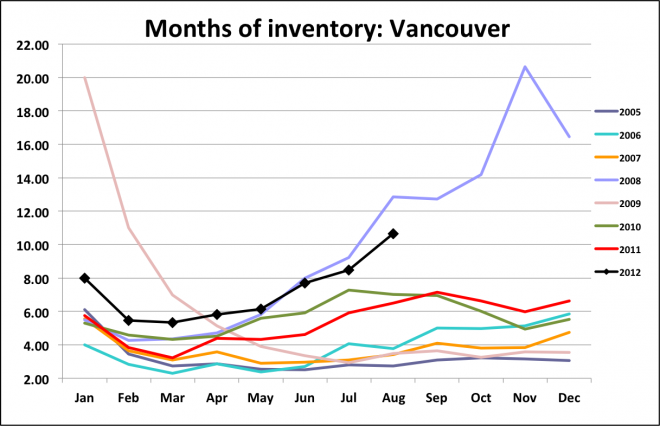 Admittedly, the pace at which homes are being put up for sale has slowed considerably in August from the mid-summer peak, but builders don’t seem to have gotten the memo that demand has been cooling rapidly for months now: the number of housing starts and dwellings under construction, particularly condos, has risen rapidly from the 2009 lows and continues to grow. 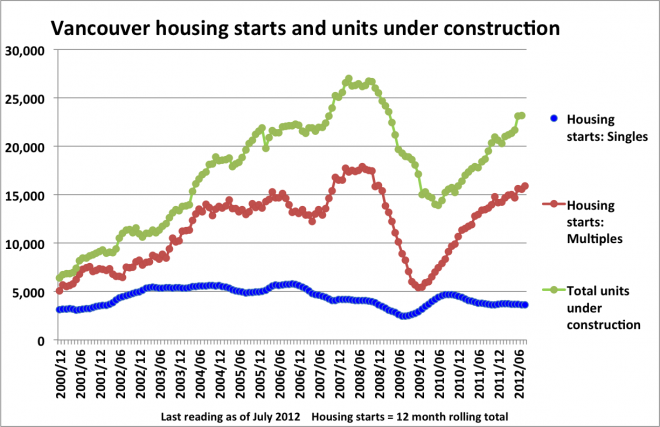 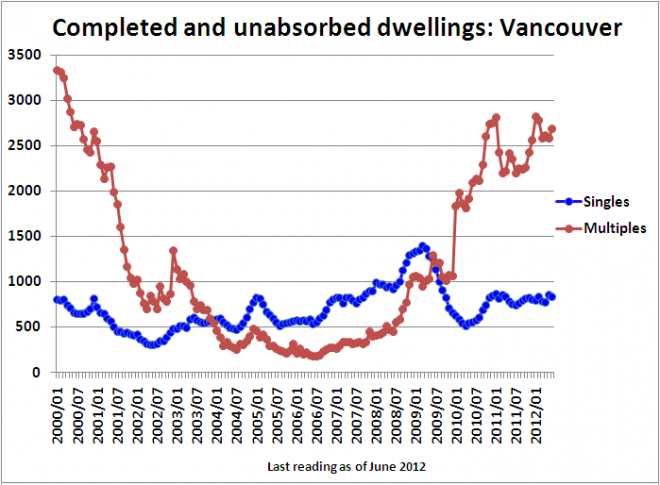 In other words, while sale volumes are nearing recession levels, building in the Vancouver region has been booming. Barring a strong reversal of current trends, this supply of new homes will only increase inventory and further pressure prices, which showed the first year over year dip since 2009 according to the MLS Home Price Index.

Toronto also felt the chill in August. Sales across all segments of the residential housing market were down by 13 per cent compared to last year while condo sales fell 22 per cent. And though the average resale price trended up, led by outsized gains in detached houses, condo prices actually fell four per cent over last year in the city of Toronto.

While August resales were down 13 per cent, housing starts surged in Toronto, jumping 72 per cent over last year with the multi-unit segment (primarily condos) surging 108 per cent. There are now a record 63,400 dwellings (and growing) under construction in the city at a time when resales, particularly in the condo segment, appear to be weakening. 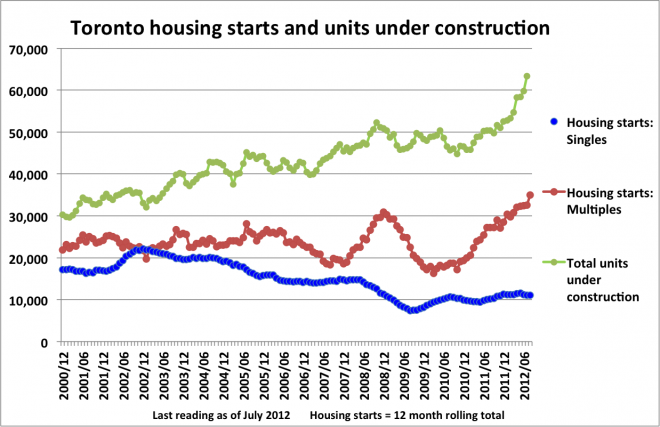 Even in the “bulletproof” downtown core, which accounts for 30 to 40 per cent of all condo sales in the city, there are flashing warning signs. After registering record highs as recently as May, sales here plunged 35 per cent year-over-year in August, below the 2008 low water mark for the decade. Look at the sudden u-turn in sales: 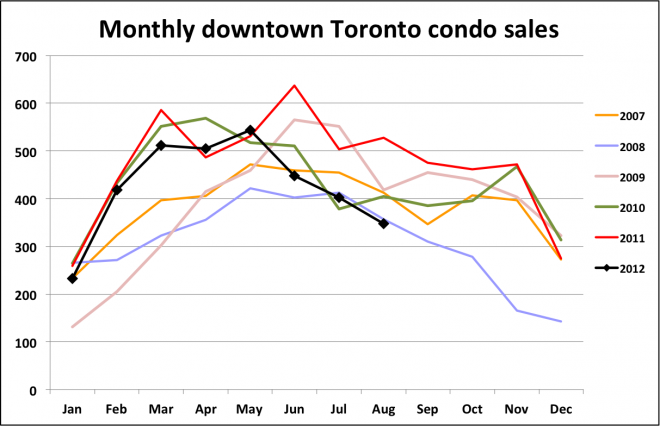 Here too, the pile of condos with a “for sale” sign is growing. New listings in August were up 25 per cent compared to the same period in 2011, while total inventory remains at all-time highs for August and by a substantial margin. 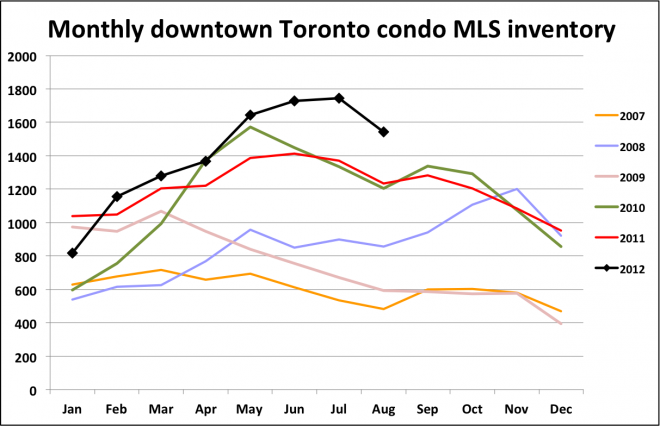 Montreal generally flies under the radar in housing market discussions, despite being the second-largest metropolitan centre in Canada. But the overall market here seems to be in a more precarious position than in Toronto, where the weakness is contained in the condo segment alone.

The latest data is truly ugly. Not only were sales were down on a year over year basis for the first time in 15 months, they fell to the lowest level since 2004. 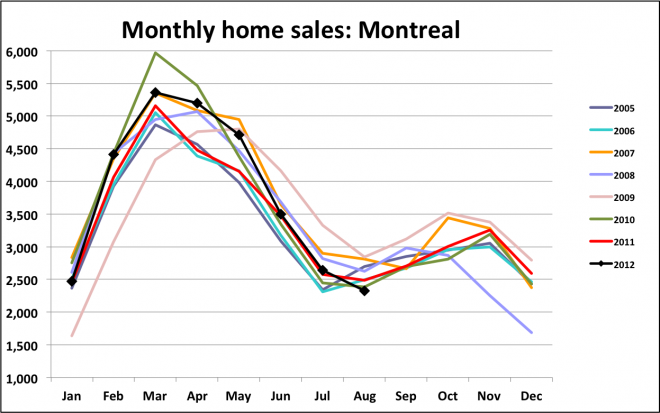 Meanwhile, the number of listings remains at an all-time high for the month. Months of inventory blew out to nearly 11 in August. While there is some seasonality to the data, a reading above 10 for any length of time is generally associated with falling prices. 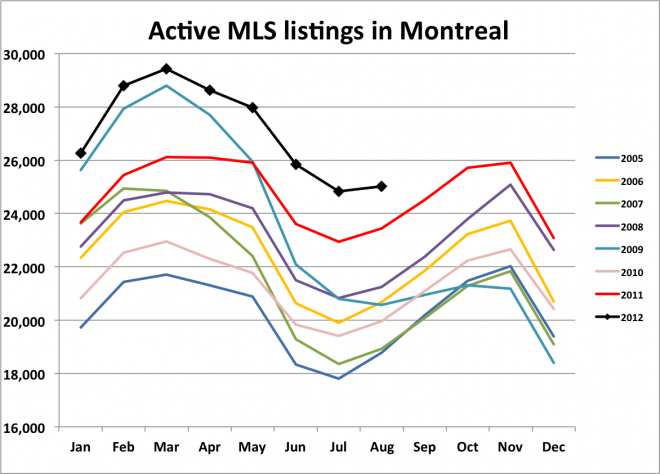 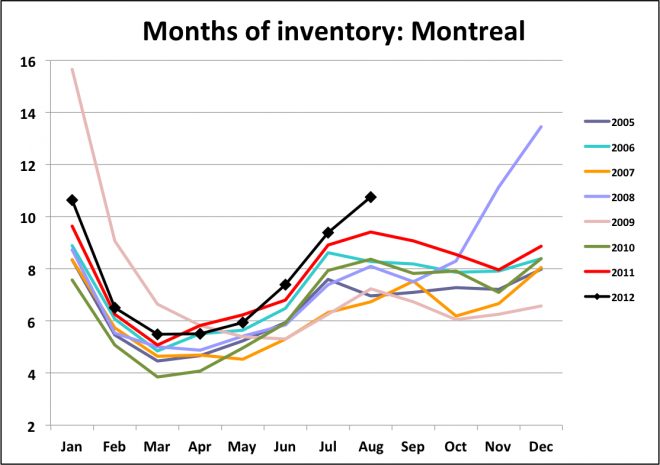 It’s like 2008 all over again in some key markets:

The last time the numbers were this bad in places like Vancouver and the downtown Toronto condo market, it was August 2008, but things looked quite different then.

The Bank of Canada overnight interest rate was three per cent and would drop to 0.25 per cent over the next eight months, bringing variable-rate mortgages and HELOC rates down with it. The discounted mortgage rate (the rate borrowers actually get from the bank, as opposed to the overnight rate) was about to plummet nearly 200 basis points in five months, providing a massive boost in affordability.

In addition, the government and CMHC were about to launch an aggressive campaign to insure low-ratio mortgages and purchase them and other insured mortgages off bank balance sheets in an effort to keep mortgage credit flowing.

Today, however, we have the exact opposite dynamic. Rates are near record lows, particularly for fixed mortgage rates and widely expected to rise sometime next year. It is much more difficult for lenders to obtain bulk insurance from the Canada Mortgage and Housing Corporation and I’m now hearing of big banks asking for a greater down payment on conventional mortgages in certain markets where they see a higher risk of a housing correction. Also, the Office of the Superintendent of Financial Institutions Canada has axed cash-back and stated-income mortgages by the big banks while the CMHC has tightened mortgage rules again.

The sudden slowdown in sales in key markets as a result of new lending rules is perhaps the clearest sign yet that the Canadian housing market is being driven and sustained by mortgage debt rather than true fundamentals. In August, Canada’s three-largest metropolitan areas saw significant declines in home sales and growing inventories of unsold dwellings relative to last year at this time. While this may not constitute a trend yet, it should at the very least cause us to ponder the implications of the long-anticipated slowing in the resale market. Indeed, should soft sales persist, and I see little on the horizon to reinvigorate them, they will weigh on prices in these key markets and likely in short order.