Cashing in on swine flu

Companies and investors are lining up to capitalize on flu fears 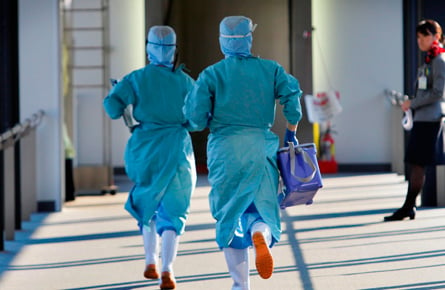 As media coverage of the swine flu outbreak turned feverish Tuesday afternoon, a woman rushed into a downtown Vancouver convenience store, out of breath, and pushed her way to the front of the line.  “Do you have masks?” she asked a bewildered clerk. “You know, gas masks, to stop the flu?”

With the virus continuing to spread to more cities, and health officials warning of a possible pandemic, a sense of panic, verging on paranoia, is setting in. But while the outbreak threatens to traumatize a global economy that was already acutely ill, there’s been no shortage of companies lining up to capitalize on flu fears. A quick scan of corporate press releases from the past three days turns up numerous companies trying to position themselves close to the crisis in order to drum up new business and attract investors. “Face mask that kills swine flu readied,” one Hong Kong biotech claimed; another, in Utah, promised that its hand sanitizer “kills the swine flu virus.” Meanwhile, Medicago, a biotech company in Quebec City, announced it has already obtained the genetic code of this particular strain of influenza, and, using its technology, could whip up a vaccine within a month.

It’s not hard to see why companies are eager to catch some of the spotlight. The swine flu outbreak, which began in Mexico where more than 150 have died, has attracted intense attention. Never mind that Canada has experienced just 19 cases of swine flu, all of them mild, or that the virus has claimed just one life in the U.S. The 24/7 news cycle, along with the echo-chamber of the Internet, have dramatically amplified fears.

Some companies are already benefiting from all the attention as their share prices soar. Big pharmaceutical companies like Switzerland’s Roche Holding, the manufacturer of the Tamiflu vaccine, and Britain’s GlaxoSmithKline, have seen their shares rise nearly six per cent since word of the outbreak spread. Many others are tiny penny stocks that can benefit hugely from increased attention. Noveko, a Montreal-based biotech that says it has developed a germ-killing face mask, has seen its shares soar nearly 80 per cent over the last week to $2.60. Likewise, Medicago’s shares began to rise last week as investors called the company to ask whether it was working on a vaccine, says Frederic Ors, vice president of business development. Medicago put out a statement Tuesday saying that it had begun work on a vaccine for swine flu. At one point the tiny biotech’s share price had nearly doubled to 32 cents. “It’s not good that it’s happening, but it’s good for us because it gives visibility to our technology,” says Ors.

When investors and companies pounce on a crisis such as swine flu, many are quick to criticize them for profiting on the misery of others. But Sherry Cooper, the chief economist at BMO Capital Markets, says no one should be surprised by what’s going on. “I think that the markets are functioning as they always do, trying to predict the future,” she says. “Some of it is irrational, but much of it is similar to what happened with previous pandemic scares.  I don’t think we should try to make value judgments about whether it is right or wrong to do this.”

What’s more certain is that those investors trying to make a buck off of swine flu are likely to be disappointed when the payoff doesn’t come as fast as they expect. While Medicago says it can turn around a potential vaccine in a matter of weeks, that doesn’t mean it will make any money any time soon. The company has already been working on an avian flu vaccine for a year and a half and human trials are still four months off. Barring an urgent situation in which health officials decide to forego their entire drug testing regimen, a swine flu vaccine wouldn’t be ready until at least 2011.