HBC's clothing line for the Vancouver Games is better than the disaster it pushed in Beijing. But it's still a bore—and there's the whole logo fiasco. 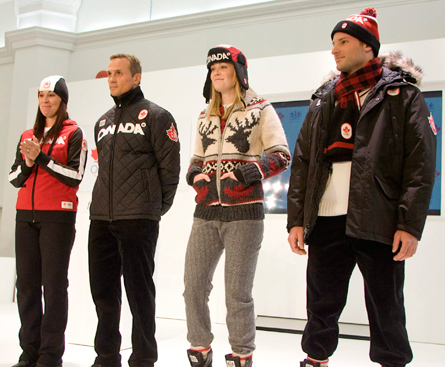 When you’re accused of borrowing design mojo from the Conservative Party of Canada and the Canadian Armed Forces, you know you have a problem, stylistically speaking. So it went for the Hudson’s Bay Company yesterday, just hours after it unveiled its homage to Bob and Doug McKenzie’s sartorial stylings via its clothing collection for the 2010 Winter Olympics. All the hoser clichés have been covered: Toques? Check. Cowichan sweaters with reindeer? Check. Quilted parkas? Check. Red and black buffalo check? Check. Flap-eared hunting caps? Check. All that’s missing is the ear muffs, which would have actually been a good idea.

Liberal MP Hedy Fry surveyed the line of red, white, black and grey clothing and a partisan conspiracy, comparing the HBC’s official Olympic logo, which was approved by the Canadian Olympic Committee (a black ‘C’ with a red maple leaf in the centre) to the logo for the Conservative Party (a slanted blue ‘C’ with a red maple leaf in the middle). Then came the inevitable comparisons to the Royal Canadian Air Force’s logo—a red maple leaf inside a black ‘C.’ Turns out, the HBC was sensitive enough to the similarity between its new logo and the military logo that it called in its lawyers for a meeting to determine that they were in fact different “enough,” the Hudson Bay’s fashion director Suzanne Timmins told Canadian Press. “When you’re dealing with the maple leaf, red, white, black, you’re going to come across a lot of different logos that are very close to other people’s logos.”

How true. When you’re working with the unoriginal ingredients of a ‘C’ and a maple leaf, there’s an obvious design solution. But the derivative logo underscores the fundamental problem with the collection: it’s predictable, it’s safe, it’s conservative—small-‘c’ conservative, that is. And that’s not the bold signal the beleaguered Hudson’s Bay Company, in turnaround mode under new president Bonnie Brooks, wants to be sending right now. Brooks, a respected retailer with a great sense of style, is determined to transform the dowdy chain into a fashion destination. The company, owned by American private equity firm NRDC Equity Partners, has also recently expressed interest in taking the company public in Canada in 2011.

The Olympic line, which ranges in price from $10 for mittens to $350 for the hand-knit sweater and which will be sold at its Zellers and The Bay stores, is an important public salvo. The HBC signed a $100-million deal in 2005 to supply Olympic-related consumer attire and athletes uniforms from 2006 to 2012, outbidding former supplier Roots. (They also hired Roots designer Tu Ly to head their design team.) So far, it has yet to deliver bronze, let alone gold; last year’s offerings for the Beijing Summer Games were a garish disaster.

This year’s line, though banal, is at least wearable, and has some nice detail (the notable exception being the reindeer sweater, which in the press photo looks like hands are cupping the model’s breasts). The ‘Canada’ wordmark, which emphasizes the letter ‘A’, is fresh. Timmins has said they wanted its slight tilt to represent British Columbia’s peaks and slopes, and it does. But no item has the potential iconic appeal of Roots’ poor boy hat, which became a coveted item after snowboarder Ross Rebagliati wore it backwards at the 1998 Nagano Winter Games. There’s a bold white and red ‘Canuck’ t-shirt in the new line, but it’s another example of not quite getting it bang-on: the overly fussy outline of a maple leaf diminishes its graphic punch.

With the Winter Games being held in Canada, the HBC has been handed a merchandiser’s dream scenario. The stuff should walk out of stores. That’s why they could have made a bolder statement, one that surprised and delighted, one that reaches imaginatively into the national history and psyche—something beyond an attempt to pander to the mass market and tourists who see the McKenzie brothers’ slacker couch-potato image as a Canadian archetype. It would also have been refreshing to see the company respond to the growing desire to “shop local.”  Yet 75 per cent of the consumer clothing will be manufactured overseas–in China among other countries. The actual athletes’ uniforms, yet to be revealed, will be made in Canada. Let’s hope they break some design barriers and excel. After all, isn’t that the point?