CHART: Nexen's assets in Canada and around the world

Canada's oil patch isn't the only interesting prize for CNOOC

Although Nexen is headquartered in Calgary, it has extensive operations in the U.K. North Sea and the U.S. Gulf of Mexico, which is why CNOOC’s takeover bid triggered governmental reviews there too. In Europe, the deal was subject to scrutiny by both the European Commission, which gave it the green light today, and the U.K. government, which hasn’t signed off on it yet. The jury is still out in Washington as well, where CNOOC and Nexen have pulled and refiled their application for government approval last week. 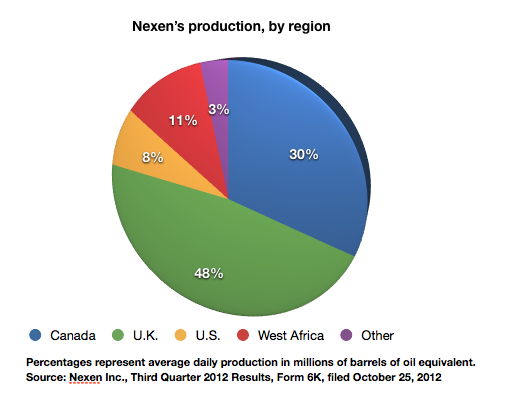 Some have suggested that Nexen’s holdings in the U.K. and the U.S. could be just as interesting for CNOOC as Canada’s oil patch.

The U.K. is where Nexen currently gets its lion’s share of daily barrels, though production in the North Sea peaked years ago. Still, one Reuters analyst suggested that Nexen’s British oilfields would grant CNOOC “a critical role at the heart of the world oil pricing system.”

The U.S., on the other hand, doesn’t account for very much of Nexen’s current production but exploration potential in the Gulf of Mexico is “significant” and U.S. assets are “critical component” of growth strategy, according the company. The Wall Street Journal reported that “Cnooc executives aim to use [these] assets as a platform for further deals, according to people familiar with the situation.”