Chart: The Diamond Jubilee and the British economy

Is the royal party a stimulus or a drag? 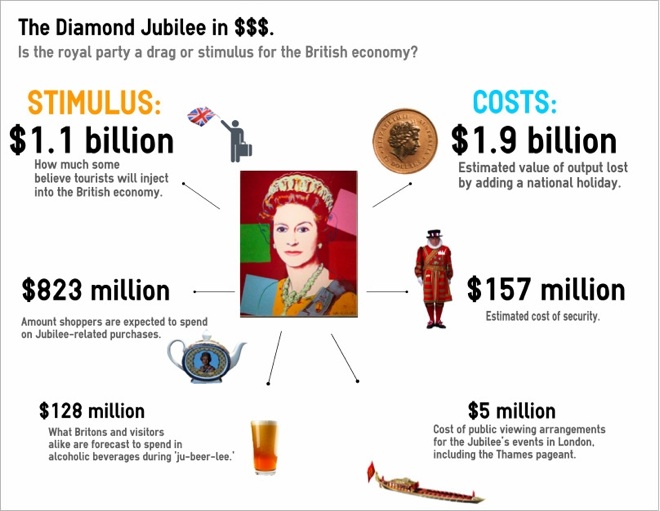 Whether this weekend’s Diamond Jubilee celebrations will be a much-needed stimulus or an unnecessary drag on the ailing U.K. economy has been the object of heated debate in the British media. Of course, such calculations are always an educated guess at best. This is primarily because the most important number–the value of output lost by adding a national holiday devoted to royal celebrations–is based on a what-if estimate of how much the economy would have grown in the absence of the “Jubilee effect.” For the Diamond Jubilee, the British government has estimated that number at nearly $2 billion. (The direct cost the Jubilee–borne in part by individual donors and corporate sponsorships–is in the millions, a negligible sum in terms of the country’s GDP.)

On the opposite side of the guessing game, British retailers have provided a wealth of estimates–some wildly optimistic–about how much the Queen’s Jubilee will inject into the economy via shopping and tourism.

In the end, some analysts have noted, the net effect of the Jubilee might very much depend on that most supremely uncontrollable of variables–especially in Britain: the weather. Sunny, warm days would help Britons and visitors spend. Cold, rainy ones won’t. Unfortunately, so far the forecast is rain.

Interested in more Maclean’s Diamond Jubilee coverage? Take a look at our e-book on the Queen. Keep watch on Maclean’s.ca for continuing coverage of festivities.