Sentiment is much stronger than GDP figures would suggest 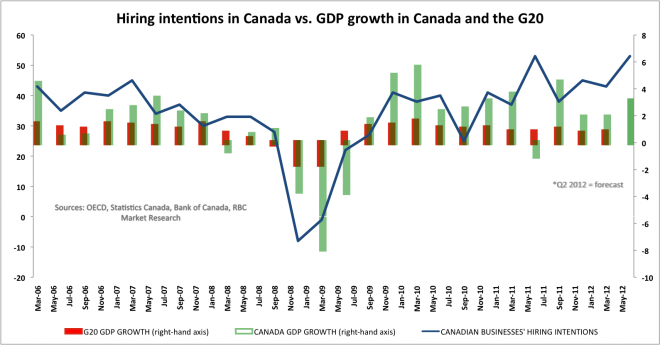 Widespread doom and gloom about the global economy and some mixed-signs on the home front haven’t shaken Canadian businesses’ optimism, a Bank of Canada survey revealed yesterday. The Bank’s quarterly Business Outlook Survey showed a majority of surveyed businesses forecasting growing sales in the next twelve months and planning to increase investment over the same period. But optimism seemed to turn to euphoria when Canadian firms were asked about hiring decisions: A whopping 59 per cent responded they believe they will step-up hiring in the coming months, vs. only 6 per cent who thought they would cut back. As the chart above illustrates, over the past three quarters sentiment over hiring was a lot stronger than one might have expected by looking at either Canadian GDP projections or growth among the world’s largest developed and developing economies (the G20).